WW3: Climate change must be treated like a world war if we are to survive – Warning | Science | news 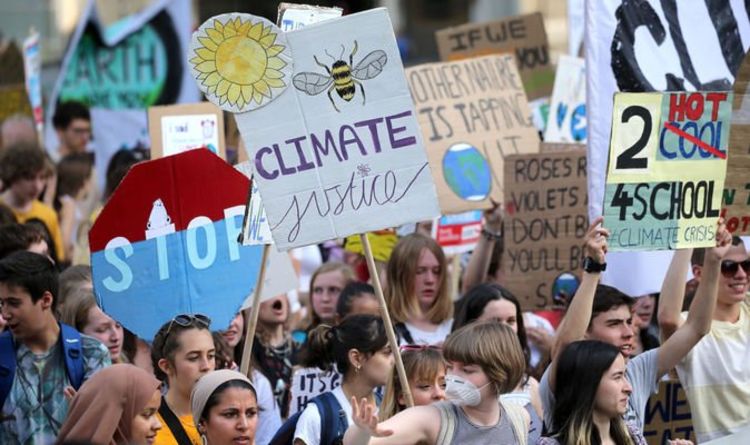 The world has been warming at an alarming rate since 1975, with scientists saying global temperature has increased by about 0.15-0.20 ° C per decade due to climate change. While that number seems relatively low, global warming is undoubtedly affecting the melting ice caps.

The volume of ice in the Arctic or the North Pole has shrunk by an astonishing 80 percent since 1979 – scientists warned of a sharp rise in sea levels.

If the West Antarctic ice sheet, in which the Pine Island Glacier is located, were to melt completely, the sea level would rise by three meters.

Climate models have shown that a sea level rise of more than two meters could permanently flood large parts of the British coast including Hull, Peterborough, Portsmouth and parts of East London and the Thames Estuary.

The planet has already seen a 1C rise from pre-industrial levels, which will contribute massively to the melting of the ice caps and the subsequent rise in sea levels.

Currently, sea levels are rising about 8mm per year due to the melting ice, and while that doesn’t seem like much, the impact could be huge for future generations.

Between 1993 and 2014, sea levels rose by 66 mm – or about 3 mm per year. If this continues, or if it gets faster, it could mean coastal cities like New York could be flooded by the end of the century.

Now experts are warning that we must approach climate change as if we were fighting World War III.

A team of climate scientists from Australia wrote a post for The Conversation saying that governments have abandoned humanity and that we now have a considerable task ahead of us.

The researchers wrote, “We are a group of experts in physics, geology, science education, coral reefs and climate systems science.

“We believe that the lack of progress by governments in reducing global emissions urgently calls for bold solutions.

READ MORE: News from Antarctica: The polar continent is melting six times faster than it was in the 1990s

“We have to fight climate change as we did in World War III – and fight on many fronts.”

Scientists suggest many ways this war can be waged, including planting many more trees and plants to absorb carbon dioxide and building reflective surfaces on the ground to reflect the sun’s rays and make the planet a little cooler.

Another option would be to convert carbon dioxide into rock: “In carbon mineralization, carbon dioxide is converted into carbonate minerals by mimicking the natural production of mussels and limestone.

“In this way, potentially huge amounts of CO₂ can be captured and useful building materials are created as a by-product.”

DO NOT MISS
Sea level hits REKORD high as UN requires urgent action
School of Rock will release a band aid-style climate change song in 2020
Climate change: The carbon sinks in the earth’s rainforest are on the verge of collapse

Finally, the researchers argue that a global HQ needs to be established.

He said: “The war requires a central headquarters that provides guidance, information and coordination – perhaps a greatly expanded version of the Greenhouse Office established under the Howard Coalition government in 1998 (but later merged into a different government department).

“Among other things, the office should provide information on the climate costs of each item we use, both to facilitate consumer choice and to tax products that are harmful to the climate.

“Some technologies can prove to be too expensive, too risky, or too slow to implement. All require careful governance, leadership, and public engagement to ensure community support.

“But as global greenhouse gas emissions continue to rise, governments must use every available weapon – not only to win the war, but also to prevent the dire social cost of despair.”