Why I left physics for business | science

I love physics. Brick by brick, you can build new theories from established theories and know that they will apply not just on earth but throughout the universe. The benefits are incredible: I’ve been working on the theory and simulation of plasmas (which are made up of stars) for nuclear fusion. If nuclear fusion achieves its goals, it could mean the end of our dependence on fossil fuels, the end of climate change and energy security for at least millions of years. The experiments in fusion are reaching the limits of nature. Every time the ignition system at Lawrence Livermore National Laboratory in California fires its fusion laser, the world’s most energetic material is heated from 18 degrees above absolute zero to hotter than the center of the sun in just a few nanoseconds. The work was as exciting and intellectually rewarding as one might expect.

When quantum mechanics brought classical mechanics to a standstill, the financial crisis led to a reassessment of macroeconomics

But recently I decided to give up the rules that govern nature for the rules that govern people and markets: economics. Why should i do such a thing? Scientists are among the most trustworthy groups in society. Economists now … well, it’s not good news, as polls from YouGov show. Worse still, the economy is often confused with finance, banking, the short-term ups and downs of the stock market, or a desire to make as much money as possible. Even the Queen seemed to blame the economists for the financial crisis. Respect for business as a profession is very low, and public relations efforts have been regrettable compared to science communication.

The first reason I thought about changing the subject is that all is not well in scientific research. Precarious short-term contracts seem to be the norm even for researchers with up to 10 years of experience. Data from the Higher Education Statistics Agency (HESA) shows that 34% of all existing jobs in higher education are temporary. A 2010 report by the Royal Society found that only 3.5% of PhD students get permanent positions at a university. Even prestigious short-term positions such as junior scholarships increasingly look like extravagantly titled post-docs with little chance of advancement. None of this encourages researchers to stay in science. And although the UK has very little per capita spending on science for a G8 country, this is not a UK problem, it is elsewhere as well. Even if it weren’t for that, it can be difficult to put opportunities into practice in other countries when you have a partner or family. This meant very difficult decisions for my colleagues and me. As much as I loved physics, it just couldn’t commit itself.

In the meantime, I began to develop feelings for the economy. Instead of the rules that regulate the behavior of particles, it is about the rules that regulate the behavior of people. a much more complex problem in many ways. I began to learn that working as a physicist had taught me to see the world in a revelatory way through the lens of the laws of nature, so that economics could open up a new perspective: one in which people’s behavior is explained by their incentives. Business can tell us how we can all do better, for example through trade, how to change incentive structures to get better results for organ recipients and, more importantly, but just as interestingly, why popcorn is so expensive at the cinema. All of this means that business can go a long way in improving people’s lives. We usually refer to science, technology, engineering, and medicine as drivers of the good of the modern world, but I think economics plays an equally important role: while the laws of the natural world are fixed and social, laws are not, and economists can Shaping politics in such a way that it best serves the interests of humanity. And although the lack of trust in economists is worrying, I see it more as an exciting challenge than as a reason to stay away from the topic.

On October 5th, 2015, on my first day as an economics researcher, I stood in front of the Bank of England and was ready to swap particles for people. The Bank of England was specifically established in 1694 to “promote the well-being and benefit of our people to the public”. Working at a central bank means that the policy makers who can steer the course of the economy are just down the hall, eager to put the best research into practice for the common good. The kind of questions central banks are preoccupied with right now are some of the big questions of the age: How does the connected and global economy work? How can we design economies to be more robust and produce better results for all? How could the rise of robots affect jobs, or how could climate change affect financial stability?

These are truly unprecedented times for macroeconomics. While the financial crisis is over, my generation will likely bear the scars of higher unemployment rates, lower wages and lower home ownership rates for the rest of our lives. The post-crisis period was downright unusual: interest rates are the lowest in history, the UK has seen the most sustained decline in real wage growth since the 19th century and productivity growth in the UK has been negative over the past decade. 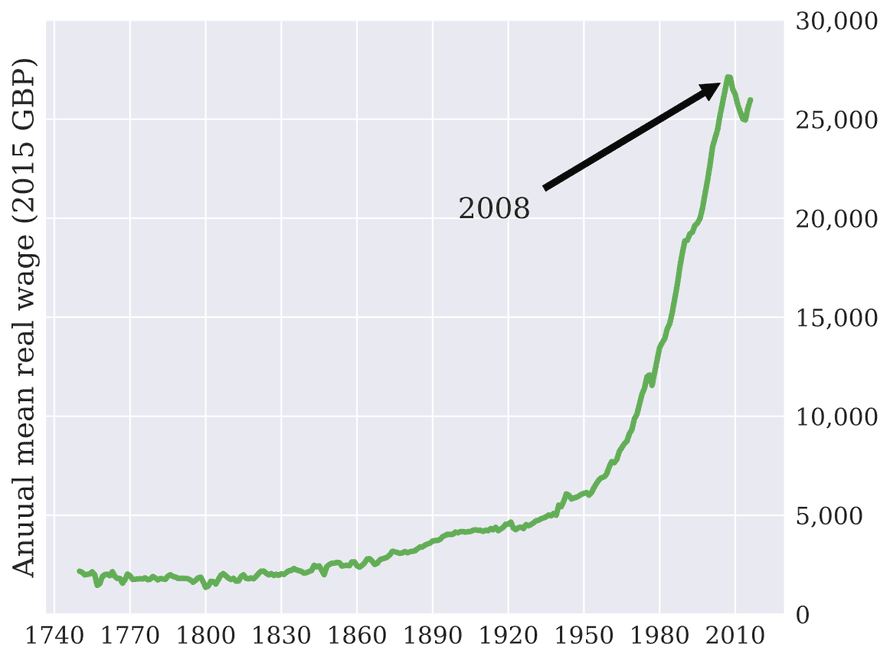 These facts are important. Much. Nobel Laureate Paul Krugman quipped, “Productivity isn’t everything, but in the long run it is almost everything”. Robust economic growth might not sound as sexy as hitting giant lasers, but higher GDP tends to mean we can afford more research, health care, welfare and education, that more people can find work, and that companies are better able to invest and do innovate.

Just as I hoped economics would be good for a scientist, I think scientists can be good for economics. While historical economics has been insular in research, with few authors per article and a small number of citations on external disciplines, a change is underway. The most respected practitioners of macroeconomics have been demanding new perspectives since the financial crisis. Some macroeconomists naively called the pre-financial crisis “great moderation,” a term that reflects the complacency of scientists at the end of the 19th century who believed they had reached the “end of physics.” Just as quantum mechanics stalled classical mechanics and sparked a revolution, the great financial crisis has led to a reassessment of some of the core assumptions of macroeconomics.

Associated with this re-evaluation is a willingness to adopt techniques, ideas and even people from other subjects. On my team at the Bank of England, I work with a neuroscientist, linguist, physicist, mathematician, economist, data scientist, computer scientist and even economist. Topics such as network science, psychology, behavioral science, evolution theory, agent-based modeling (an area that can trace its origins back to plasma physics), and computer science are drawn into the macroeconomic mainstream. Some of this interest in external issues existed long before the crisis, but the crisis acted like a catalyst and accelerated the adoption of new ideas. Just as interdisciplinary approaches in the natural sciences have borne great fruit, I believe that business will benefit from closer cooperation. There was even progress in public relations. One exciting twist is that more economic data is available than ever before. Macroeconomic theories have always been impossible to test in controlled experimentation, but more data means that theories can be more easily tested and refined through natural experimentation: not only are there more scientists in macroeconomics, but there are also more science.

We live in interesting times, shaped like never before by the complex dependent deals, relationships and incentives that we call the global economy. Economic research can help us understand them. In addition, belonging to a central bank means that important research results reach the policymakers directly. All of this means that it is a great time to be doing economic research and a great time to be doing it in a central bank. I’m sorry physics: I still love you and always will, but glad I left you for business.

Arthur Turrell is an economist at the Bank of England and visiting scholar in the Plasma Physics Group at Imperial College London.