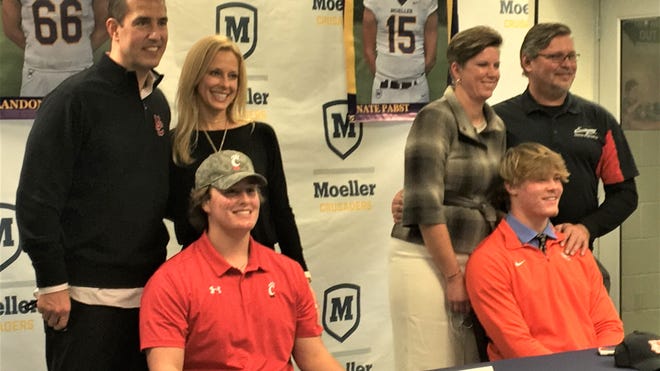 Luke Fickell heads a University of Cincinnati soccer team that has nearly 80 Ohioans on the squad. Factor those from nearby Kentucky and Indiana and you have what Fickell referred to as the “state of Cincinnati.”

After inheriting a program from now-awaited Alabama Senator Tommy Tuberville in which there weren’t many local recruits, Fickell circled Interstate 275 wagons, recruiting nearly 40 locals since 2017, and adding several key companions who were in played nearby.

Fickell’s employees add seven other signatories this Wednesday who have chosen “CinCityPride” for “Hometown Heroes”. Defensive coordinator Marcus Freeman, who is running for the Frank Broyles Award as the best assistant in college football, along with an imaginative recruiting department, was instrumental in bringing the Bearcats to the best recruiting class at the American Athletic Conference two years in a row.

In the order of their ranking you can see the UC route here, provided that everyone signs as planned:

He is a 6-foot-6 offensive lineman Fickell last saw in person when his son’s Moeller team went to Indiana to play against East Central. Collinsworth signed on April 3, choosing the Bearcats over Indiana, Purdue, and Kansas.

Glynn is a 6-foot-4,280 pound offensive lineman who signed up on April 18 and selected UC to several schools including Pitt, Louisville, and Rutgers.

Jarmon is a 6-foot-1,180-pound defender who was part of La Salles star-studded secondary school, which featured four Division I recruits. Jarmon was part of La Salle’s Division II state championship team in 2019 and this year’s group that made it to the state semi-finals. He committed on April 8th. His other offerings included Northwestern, Indiana, Iowa State, and Pitt.

Junior is a 6-foot-1,210-pound linebacker who waited a little longer for the selection and got involved in deals like West Virginia, Pitt, Army, and most of the Mid-American Conference in late October. Junior’s father is a National College Football Hall of Famer who played for Bear Bryant in Alabama. EJ Junior also had an NFL career.

Perhaps it was Luke Fickell’s simplest recruit, but he visited his father, including one in Louisville. Fickell is 6-foot-5, 275 pounds, and an offensive lineman who has garnered a number of off-season awards, including first-team awards for all districts and states. Fickell at the end of April.

“The Godfather” is a 6-foot-2,325-pound defensive device that has been paired many times double and triple this fall. Corleone was possibly the earliest commit, making its oral commit to a UC / Tulsa soccer game in October 2019. Corleone has also received all of the county and state awards. He was GMC Defensive Player of the Year, the first defender since Fairfield’s Malik Vann, a current Bearcat.

More:All Ohio Football: The Division I team names Liam Clifford of St. Xavier as Attacking Player of the Year

Nationally, UC is ranked 44th by 247sports.com, ahead of programs like Baylor, Duke, Vanderbilt, Syracuse and Kansas State and just behind Auburn, Oklahoma and Virginia Tech. To be honest, this ranking is based on the number of stars a recruit can have. Fickell’s bearcats have loaded themselves with three stars, while the so-called “blue blood cells” often have many four- and five-star recruits. Inbound Transfer Jowon Briggs from Walnut Hills is a four star hotel that originally went to Virginia.

Current freshman quarterback Evan Prater (Wyoming) and freshman linebacker Jaheim Thomas (Princeton) were four stars from last year’s class, with the Prater being UC’s top recruit according to the rankings.

Also from Early Signing Day 2019, UC had Sammy Anderson from Trotwood-Madison in the Dayton region, Daved Jones Jr. from Lakota West, Gavin Gerhardt from Xenia and Colerains Deshawn Pace. So the local perspective is an ongoing trend, with UC’s efforts ranking 18th in the country earlier this year.

“If these things (ratings) are what they are, let’s move on and see if they can’t get higher,” Fickell said at the time. “These things are important to children. They see them and it gives them momentum to see what kinds of things they are going to play with. Everyone wants to win.”

Though some may find it easy, the vest Fickell wears every game wears TEAM on his back (everyone achieves more together). His success was based on keeping local talent at home, and the rewards came through field victories and hard-earned locker room parties.