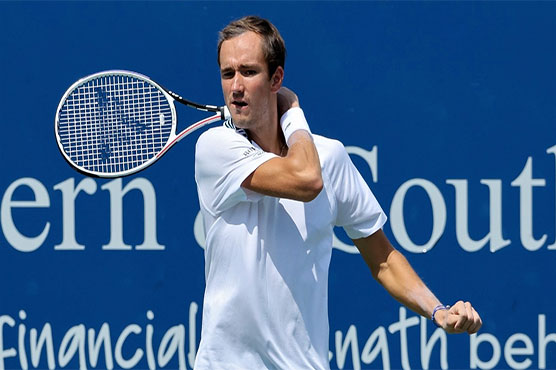 The Russian world number two had made it to the semi-finals with a 56-minute defeat, which ended with a double error by the Spaniard.

“I felt great during the game. In these conditions you try to win the game as quickly as possible, especially against Carreno Busta who can catch fire at any time and get you into long rallies,” said Medvedev.

“I tried to keep pushing him and I’m really glad I did it.”

The top seeded women Ashleigh Barty recovered from a break in the second set and overtook her French Open colleague Barbora Krejcikova 6: 2, 6: 4.

The Australian has only given her Czech opponent a third defeat since mid-May.

Krejcikova won Roland Garros in June, while Barty took the title in Paris in 2019 and Wimbledon this season.

“I feel like I did a good job of taking care of my own serves,” said Barty. “In all service games, most of the time I felt like I was in control.

“It was about being patient, knowing that I am doing the right things.”

Last week’s Toronto champion Medvedev won his eighth game in a row while preparing for the Final Four against fellow countryman Andrey Rublev.

Medvedev has won all four of the Tour games against Rublev, including the quarter here in 2019 when Medvedev won the title.

“I’m happy to play against him because it’s a nice challenge for me to see what I need to improve,” said Rublev.

Medvedev’s dominance over Carreno Busta was total, with the Spaniard never earning a breakpoint while losing his serve five times. Medvedev finished with 20 winners and seven easy mistakes.

In the semifinals on Saturday, Barty will meet Germany’s Angelique Kerber, who prevailed 6-4, 3-3 when Czech opponent Petra Kvitova retired with a stomach ailment.

After winning the first set in 32 minutes over Krejcikova, Barty fell behind a break in the second set. But the deficit was quickly closed when Barty broke her opponent’s last two service games of the game.

Barty advanced with seven aces and four breaks in the 72-minute win.

The Australian ranks 3-3 in her series with Kerber and defeated the three-time Grand Slam winner in her last game, a Wimbledon semi-final last month.

“Even on days when she’s not playing her best tennis, she finds a way to fight and stay in matches and give herself a chance,” Barty said of Kerber.