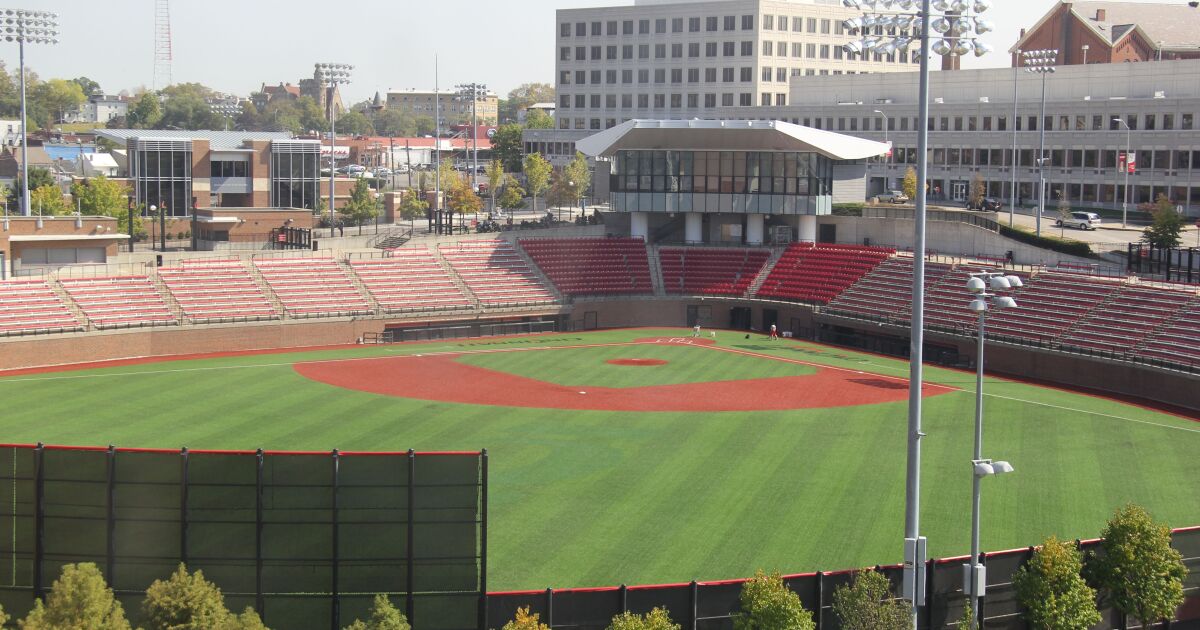 CINCINNATI – Scott Googins, head baseball coach at the University of Cincinnati, said Tuesday afternoon he was supporting the players who started a petition to change the name of the Marge Schott Stadium.

Googins said the Bearcats discussed the petition as a team.

“For me it’s a great ballpark and we’re very happy to have it,” Googins said when asked if the name should be changed. “For me it should be a positive place. I want to make sure it is positive when people talk about our stadium because it should be.”

Googins, who will start his fourth season as the Bearcats coach in 2021, is from Granville, Ohio and grew up a Reds fan.

The online petition to change the UC baseball stadium name had 8,657 online signatures at 5:50 p.m. Thursday.

Ramey said he wanted to see the UC ballpark name change due to repeated offensive remarks the late Schott made as the owner of the Cincinnati Reds in the 1990s. Schott died in 2004.

The University of Cincinnati Sports Director John Cunningham said in a statement Monday afternoon that he was always open to speaking with athletes about their concerns.

“We appreciate the willingness of our current and former student-athletes to have tough conversations and express their feelings about the name of our ballpark,” Cunningham said in a statement. “The Athletics Department provides the university administration with any information or context they need to better understand this issue from the perspective of our student athletes.”

The next scheduled meeting for the UC Board of Trustees is June 23, according to the board’s website. Trustees and President Neville Pinto “are actively investigating” this issue, according to a statement by UC spokesman MB Reilly on Thursday.

“Your deliberations will no doubt benefit and be accelerated by the guiding principles and conceptual framework of the campus-wide committee that recently examined the name change associated with the College of Arts & Sciences,” Reilly wrote Thursday.

“While we cannot apologize for the rhetoric Ms. Schott used decades ago, we can ask you to learn from Ms. Schott’s mistakes and her great love for Cincinnati. We appreciate what these great organizations bring to Cincinnati , and we fully support the decisions of organizations that have received grants from the Foundation. We will continue to support the Cincinnati community and the vital work of our charities and nonprofits, “the statement said.

On Saturday, UC senior right-handed man Nathan Moore, one of the Bearcats captains, tweeted his support for the name change.

Moore said he is urging UC to change the name of the Marge Schott stadium before the start of the 2021 season.

“I saw Jordan’s petition, read it, and then went online, did my own research, and tried to find the most credible sources possible,” Moore told WCPO. “I also spoke to a few people in the Cincinnati community and just asked them what they thought of her and what they knew. And when I found these things out, it was kind of sad, honestly, just someone knowing who gave the church so much money that they had such beliefs about the people they helped. It really doesn’t make any sense. “

“We should change the name of the University of Cincinnati baseball stadium,” Youkilis tweeted.

The UC baseball stadium was built in 2004 and was named Marge Schott Stadium in the spring of 2006 after the Marge and Charles J. Schott Foundation donated a $ 2 million gift to Richard E. Lindner Varsity Village.

The stadium is just east of Johnny Bench Field, the former home of the Bearcats where Youkilis played in college.

“The Marge Schott Stadium is represented by players of all races, religious backgrounds and ethnic groups and is also home to middle and high school baseball teams,” said the change.org petition in part. “The field receives national attention every year and it is not only irresponsible to promote someone who is so racist, but it is also in direct contradiction to the mission statement of the university.”

Ramey told WCPO that he was enjoying the UC community and baseball program and felt it was the right time for the university to make a name change as it pays a lot of attention to social injustice around the world.

“It’s important to me, it’s important to my family because I’m from Cincinnati,” Ramey told WCPO. Law? It’s all out there. ‘There are a lot of things that could change in Cincinnati that we’re going to change. So I am very confident that the people around me will support this petition in this regard. “

Ramey told WCPO that he emailed UC President Neville Pinto about the petition.