The roadside grocery service is great for customers, but these Kroger employees say they don’t feel any safer 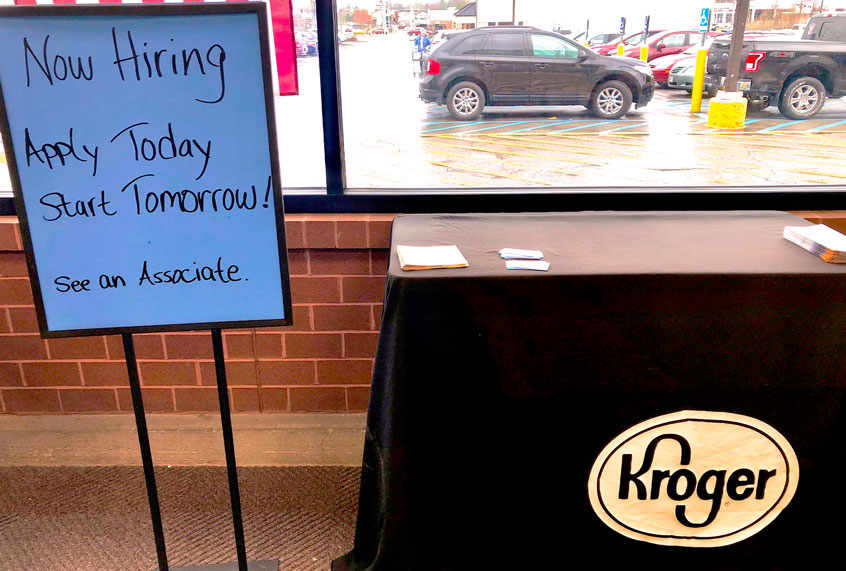 Back on April 8, the United States Department of Labor recommended that all businesses capable of doing so should transfer to either drive-through or roadside pick-up to curb the spread of the novel coronavirus through social distancing. It’s a service that many U.S. grocery chains like Kroger and Ralphs already had, but according to some store employees, the increase in online orders has made them feel no more secure.

“It’s literally impossible to keep up,” said Don B., a Kentucky Kroger employee. Don asked not to use his full name because he feared losing his job during the pandemic. “We did 45 on average [pick-up] orders one day until 280. ”

To place a Kroger pick-up order – or clicklist as the first users first knew it – customers surf online, add items to a virtual shopping cart and choose whether they allow staff to select replacements when items are out of stock. Then they choose a future one-hour pick-up window in which they park in a designated area in front of the shop and wait for an employee to load the groceries into their car.

During a normal week, customers could often have their orders fulfilled in a matter of hours – and rarely had to plan more than a day in advance – but now orders have grown as customers try to stay out of retail stores and wait times can go up to seven Days. As personal shoppers have seen, a sustained rush of panic buying after the novel coronavirus was first classified as a pandemic resulted in some grocery shelves standing empty or struggling to stay in stock, meaning pickup orders are sometimes incomplete when they are to be met.

As a result, complaints about the system are becoming increasingly common online (just type “Clicklist sucks” on Twitter for a sample).

“But this system was not designed for a pandemic,” said Don B. “It’s flawed, orders are misplaced.”

According to Don, the area in his store where employees receive and assemble the online orders has not been set up for social distancing. That makes sense; Kroger began rolling out the service in 2014, and many stores have been upgraded to accommodate it.

A photo of the room, taken prior to the pandemic he broadcast, shows Don and four of his employees standing shoulder to shoulder, each holding up a candy bar. It’s compact, filled with piles of milk crates, a fridge and freezer, multiple computers, and video monitors streaming footage from the parking lot.

“Our desk and two computers are probably three feet apart,” said Don B. “Again, not designed for a pandemic. And no one could have seen this coming, but I think the company is increasing the number of orders, that we can perform, must reduce. ”

According to Don, this has created tremendous tension in the business as employees fear for their own health while being pushed to achieve more and more as the day progresses.

“It is currently impossible to maintain the social distancing protocol. There is no way we can stand three feet apart,” he said. “I have a prescription for Xanax and have had to use it a lot.”

Kroger did not respond to Salon’s request for comment.

Grocery chains across the country drive several needs that are sometimes conflicting: serve anxious customers who are now safely and quickly eating more at home, while making sure staff are physically safe and receiving adequate compensation.

As Salon reported on March 18, several states – including Minnesota, Vermont, and Kentucky – have designated grocery store employees as “emergency staff,” meaning those employees have access to free government childcare so they can keep working, a commendable start.

The following month, both activists and unions petitioned Big Chests to pay dangers to employees whose daily duties put them at risk of coronavirus. In early April, Kroger announced they would roll out a $ 2 raise for key frontline workers. They called it “Hero Pay” and it applies to hours worked from March 29th to May 2nd.

According to a statement from the company, “The bonus will be paid weekly to ensure employees have access to extra cash. The Hero Bonus follows and is in addition to our previous March 21 commitment that offered a one-time bonus to the Associates.”

Heather Jacobson, a former Kroger employee from Columbus, Ohio, says this is insufficient compensation for the daily risk employees face.

Jacobson, who is immunocompromised, said she was withdrawn from working at the deli counter to fulfill pick-up orders – a “less customer-centric position,” she says – but she quit three weeks ago when she realized processing was going on of pickup orders means shopping alongside customers who don’t necessarily adhere to best practices for social distancing.

“There were still crowds pouring in every day, many of whom just weren’t wearing masks or gloves,” she said.

But Jacobson said one of the best things supermarkets could do to keep their employees safe is converting stores into pickup facilities.

“That way, we could use the entire store as an order-processing space without having to be in contact with customers all day,” she said.

Kroger is currently testing this model in one of its Greater Cincinnati stores. According to the Cincinnati Enquirer, Kroger is not currently considering only being picked up in other regional stores, as “company representatives said the move was due to a noticeable increase in pick-up orders in the immediate area.”

Another little way that supermarkets and customers can show their appreciation for roadside staff when delivering groceries during this time is by introducing a tip log. Tipping is a violation of official company policy – “Our employees don’t accept tips” according to Krogers’ website and Twitter – but several employees I spoke to reported an increase in customers leaving envelopes with cash in their suitcases or asking Venmo or Paypal tip them.

“I’m not going to turn this down now,” said Shannon P., an Atlanta employee. “There is a man who also left cold sodas behind for employees, which is nice. There was also a woman who left us a lasagna like in a bowl to eat – which was weird, but honestly everything is appreciated . “

On April 26, Kroger announced that all employees must wear face masks. According to a press release, employees who worked in some parts of the business were already forced to wear masks.

These are provided by the store or “Employees can also bring their own appropriate masks or face coverings if they prefer.”

“As an essential business, we have aligned our top priority to provide our employees and customers with a safe environment with open stores, e-commerce solutions and an efficient supply chain so that our communities always have access to fresh, affordable food and Products, “wrote Kristal Howard, director of corporate communications and media at Kroger, in an email.

She continued, “We also encourage all of our customers to wear a mask when visiting our stores or, alternatively, to consider one of our e-commerce options available on kroger.com.”

However, wearing masks is not mandatory for customers except in states where face masks are now required to be worn in public, such as Delaware (there are no Kroger locations in the seven other states that currently require masks ).

However, because COVID-19 can be spread by people who interact in close proximity, including people who are asymptomatic – hence social distancing recommendations – it would make more sense for customers and employees to wear masks.

This will be billed as a new security measure to further prevent the spread of COVID-19. However, if the goal is really to protect both customers and employees, everyone in the business would need to follow these recommendations.

Matt Gaetz, who is definitely not a sex criminal, cost Venmo $ 900 as an accused sex trafficker