The real science that underlies Pokémon evolution (and thunderstones) 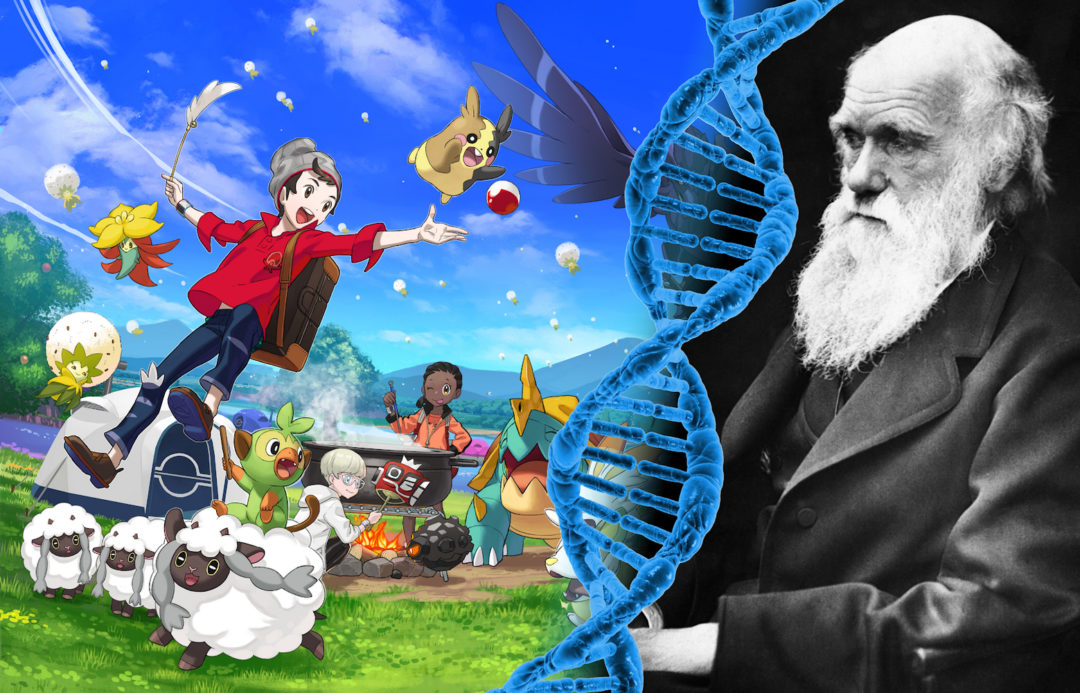 Each generation of Pokémon games can be defined by their starters. These are the three Pokémon that the player can choose from at the start of the game. Always of the fire, water, and grass type, they are usually strong enough to stay by the player’s side throughout the game. The original starters Bulbasaur, Charmander and Squirtle are among the most famous Pokémon after more than 20 years.

Prior to the release of Pokémon Sword and Shield, the fandom was split (this time having a lot of fun) among players who planned to start with the sociable Grassy-type Grookey, the whiny Water-type Sobble, and the flamboyant Fire-type Scorbunny. Regardless of which starter everyone chose, the next big question was on everyone’s lips: What will their developments look like? Because starter Pokémon always “evolve” twice in the course of the game – from a cute little pocket monster to a large, frightening final “evolution”. Evolved Pokémon are stronger than their smaller forms, can learn the most powerful moves, and assert themselves against the other legendary monsters that populate their world.

In the real world, just like in Pokémon, “evolution” refers to the process by which one species transforms into another species. In nature, however, “evolution” occurs through a process that Charles Darwin calls “natural selection”. In short, new species are created through small inherited genetic variations that bring survival benefits. These variations build up over time until a new species differs from its predecessor. The variations are the result of genetic mutations that can be caused by a variety of mechanisms such as errors in DNA replication and exposure to mutagenic substances. Suffice it to say that the natural evolutionary process takes many generations to be exposed to certain natural selection pressures.

In Pokémon, however, the term “evolution” is used in the broadest sense – not to describe the specific evolutionary process through natural selection, but as a collective term for the conversion of one Pokémon species into another. The choice to use the word “evolution” dates back to the original Japanese versions of the game that used the Japanese word “shinka” – literally “evolution”. While the “evolution” of Pokémon is not mapped one-to-one to the scientific concept of evolution, it is strongly mapped to another biological concept: the life cycle.

In biology, “life cycle” refers to the series of important biological changes that an organism undergoes during its life. The butterfly is an elegant example: it begins its life as an egg, which then hatches and becomes a caterpillar. This caterpillar eats and grows until a pupa can grow around it. Inside the pupa it goes through a metamorphosis and turns into a beautiful butterfly. This butterfly grows, mates, and lays eggs, and the cycle starts all over again. It’s a life cycle.

There are several Bug-type Pokémon that go through this exact lifecycle. Caterpie, the caterpillar Pokémon, “evolves” into a glorified doll called Metapod and “evolves” back into the Butterfly Pokémon Butterfree soon after. Caterpie’s “Evolution” depicts the life cycle of real butterflies one to one. 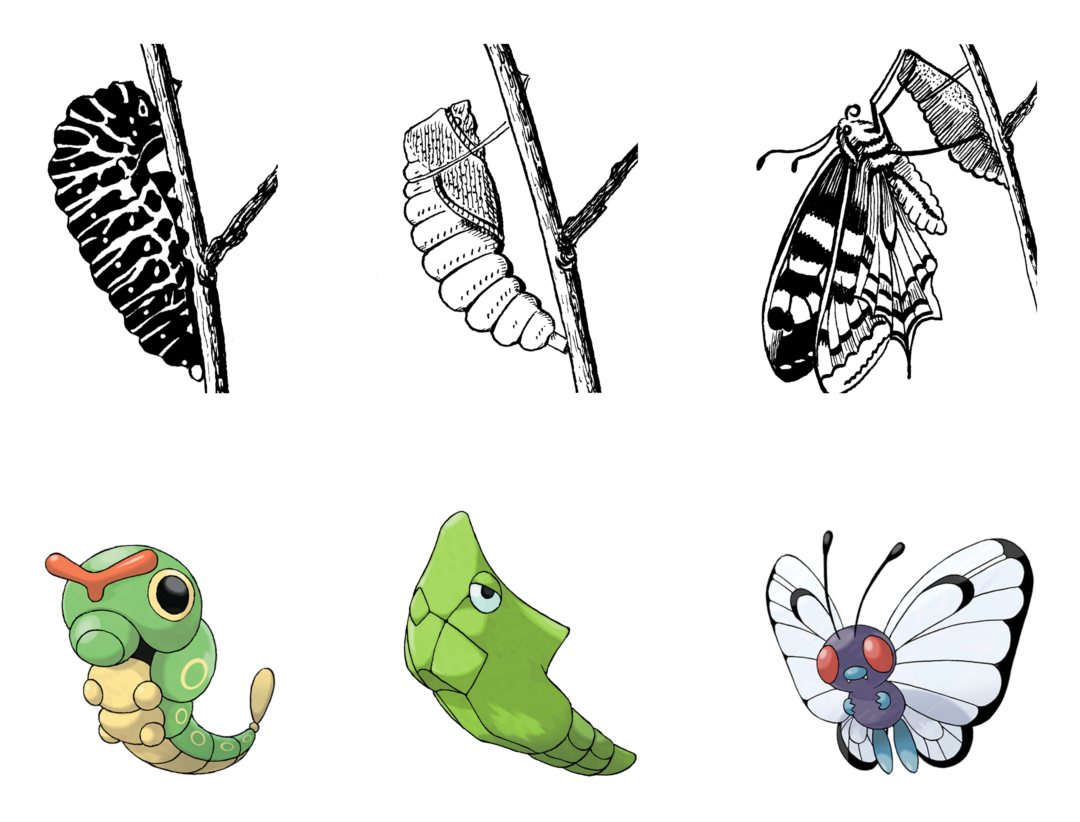 All of this makes a lot of sense when you learn about Pokémon’s creator Satoshi Tajiri from Game Freak. In a 1999 interview, Tajiri revealed that as a child he had a deep interest in collecting insects. Tajiri complained that the urbanization of his hometown reduced the number and variety of bugs kids have to collect, and this directly inspired the game design of Pokémon.

Tajiri was not asked about the choice to use the word Shinka (“evolution”) specifically, but it seems obvious that the word is being used in its broadest sense. Instead of mapping itself to the scientific concept of evolution through natural selection, “evolution” in Pokémon describes the transformation from one species to another through any mechanism. Even the term “species” isn’t used entirely biologically – it’s applied to the different stages of an individual Pokémon’s life cycle. In biology we think of organisms as the same species at different stages in their life cycle, but in Pokémon they are referred to as different species.

We can even see Pokémon’s portrayal of evolution as a life cycle in the context of the game systems. Pokémon is a Japanese role-playing game (JRPG) and uses a system in which experience points (XP) are gained by fighting Pokémon against each other. Once enough XP has been collected, the Pokémon will gain a level that makes it stronger. Many Pokémon “evolve” once they have reached a certain level in the game. It’s almost like the levels actually represent age. In this hypothetical light, if you imagine that once a Pokémon has reached a certain “age”, it will “evolve” and evolve along its life cycle.

While many Bug-type Pokémon “evolve” in a butterfly-like manner, the “evolution” of the starter Pokémon is very similar to the life cycle that mammals go through. Think of the human life cycle – people start out as babies (first stage), then go through a rapid growth phase (adolescence, second stage), and eventually become adults (third stage). The “evolution” of the starter Pokémon in each generation follows the same path. In fact, the visual design of the Starter Pokémon is often directly inspired by the transformations of toddlers, teenagers, and adults that many animals go through during their natural life cycle in the real world.

While many Pokémon evolve when they reach a certain level of experience, there are others that don’t evolve until exposed to certain items. Take Pikachu, for example. Pikachu is without a doubt the most famous of all Pokémon, but many outsiders may not know that Pikachu can “evolve” into a bigger, stronger Pokémon called Raichu. In order to “evolve” into Raichu, Pikachu must be exposed to an object known as a thunder stone. No matter how much experience and how many levels Pikachu has earned, the thunder stone is the key to reaching the next stage of its life cycle. There are many other Pokémon that require an Elemental Stone to “evolve” as well, but all of them follow basically the same life cycle as Pikachu.

It may be hard to imagine that there is a real equivalent to this type of life cycle in nature, but it actually does exist. To find it, we have to look again at Tajiri’s beloved insect world. The next real life cycle, which corresponds to the “evolution” of Pikachu and the other Elemental Stone Pokémon, is … the honey bee! Yes, the exact same species of honeybees responsible for making this sweet treat we all love.

Honey bees have three different shapes that they can take. There are worker bees who are all sterile women and are responsible for doing all the work like collecting pollen, taking care of the hive, and so on. Then there are the drones, all of which are male and exist primarily for the purpose of mating. Finally, there are the queen bees. Queen bees are all feminine like worker bees, but they are larger and fertile. Your job is essentially to mate with the drones and lay tons of eggs. 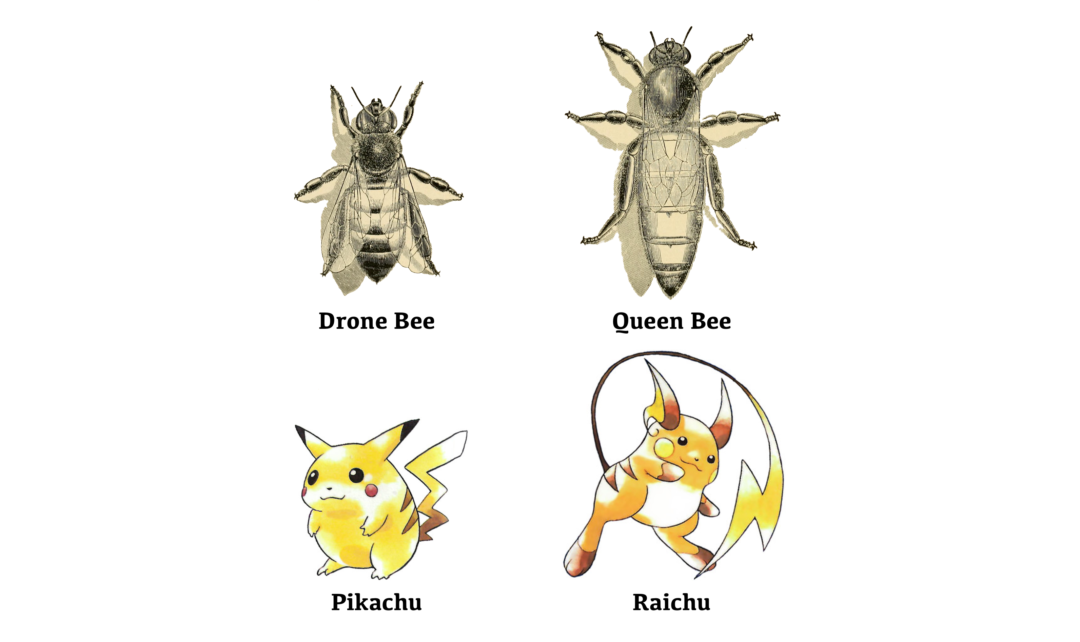 Every fertilized honey bee egg can become a queen bee. Indeed, a worker bee and a queen bee could be genetic clones, but they are anatomically, physiologically, and behaviorally very different. These differences arise because the queen bee is fed large amounts of a special feed that the worker bees produce as royal jelly. While all honey bee larvae eat small amounts of royal jelly, the queen bee larvae literally swim in it. There are indications that royal jelly has an influence on the epigenetic state – ie the activation and deactivation status of various genes – of the genome of the queen bee larvae. These changes prioritize metabolism and maintain fertility, while deprioritizing traits that queen bees do not need, such as pollen-collecting baskets, is not necessary. The end result is a completely different species of bees than the workers, all because the larvae were exposed to a large amount of royal jelly.

In the Pokémon world, a Thunderstone might act like royal jelly to a Pikachu – it activates and deactivates genes and leads to a transformation into another, more advanced form. And that could also explain why the elemental stones cause several different Pokémon to “evolve” into their final shape. The epigenetic effect may act in more than one species.

In a recent interview, Pokémon Sword and Shield director Shigeru Ohmori and producer Junichi Masuda admitted they weren’t sure how “evolution” works biologically in the Pokémon world. Masuda even said the science of how Pokémon work isn’t really set in stone. But even if the scientific details of how it works in the Pokémon world are not clear, it is certainly true that much of the “evolution” of Pokémon is inspired by real biological life cycles.

Kanye West is running for President In Kentucky