Wednesday at 4 p.m. is the deadline for petitioning signatures for independent presidential candidates for the Ohio fall election. The Libertarian Party of Ohio filed the documents for their ticket yesterday. But the party is pursuing an unusual strategy for this.

On Tuesday afternoon, Ohio Libertarian Party chairman Robert Bridges stood outside the Secretary of State’s office. With him were volunteers who had petition signatures in boxes plastered with Johnson for presidential stickers. Bridges said it would get 7,000 valid petition signatures, two thousand more than needed to get the names Gary Johnson and William Weld for the November nationwide vote.

“Our presidential and vice-presidential candidates have the most leadership experience of the other two candidates. Two dual-term governors in New Mexico and Massachusetts. ”

Joshua Eck, of the Foreign Secretary’s office, said when staff opened boxes to process the petitions, they were surprised by the name listed as the presidential candidate.

“We received about six boxes of petitions, all for Charlie Earl, to run for independent president in Ohio.”

Charlie Earl was the 2014 Libertarian Party of Ohio candidate for governor. His name did not appear on the ballot after a lawsuit and an investigation into issues with his petitions. Earl explains that there is a good reason why these president’s petitions were tabled in his name rather than Johnson’s. It all boils down to a lawsuit in a federal court, which is still being examined because of a new state law in which smaller parties are involved.

“If we jump the gun and use Gary and Bill as independents now, they would not be able to run as libertarians if the court put the libertarian party back on the vote.”

Earl said Ohio’s so-called “Wound Loser Act”, which prevents candidates from appearing on the ballot more than once in an election season, could be used as a means to prevent this from happening when Johnson and Weld are already on the ballot Independent are on the ballot.

“We thought it best to take the path of least resistance and cover all bases. In other words, politically we call it CYA. ”

So Earl says he and Ken Moellman of Kentucky will be in candidates for the time being. Earl says he hopes the decision will come sooner rather than later.

“The sooner the court rules, the less afraid we are and the less mimosas and Bloody Marys are consumed by libertarians and politicians across Ohio.”

The whole situation is confusing for sure. The spokesman for the Libertarian Party of Ohio, Aaron Keith Harris, admits this. But he says the people who signed these petitions knew the strategy that is being used.

“I know it’s confusing. In fact, I had to explain it to the man who changed my tires in Dayton because I got him to sign. He said, “Oh yeah, that’s pretty complicated, but I’m voting for Gary.”

Harris says the petition with Earl’s name is the one his group has been working with for months. When asked why reporters who went to the Secretary of State’s office at the time the petitions were filed were not told about this strategy, Harris said there was no intention of misleading anyone.

“It wasn’t a secret. Except for the present company, Jo, most reporters, when you try to explain more than one thing to them at a time, cross their eyes. So if they haven’t done their homework and looked at the petition and were not informed of the process, then that is up to them. ”

Referring to Ohio Law on Pre-Election Candidate Exchange, Harris says this can and has been done before. Eck of the Republican Secretary of State’s office says they will work to certify these petitions, but he says this is unusual.

“We know of no time in Ohio history when a candidate ran a presidential motion and then asked to put someone else’s name on the ballot. Should this be the case, our office will need time to check the legality of it under state law. ”

Many political experts say this election was the most unusual in modern history. This filing just adds one more reason to the list. A new Quinnipiac poll shows 8% of likely Ohio voters say they plan to vote for Gary Johnson. Robert Bridges, chairman of the Libertarian Party in Ohio, signs papers at the Secretary of State’s office 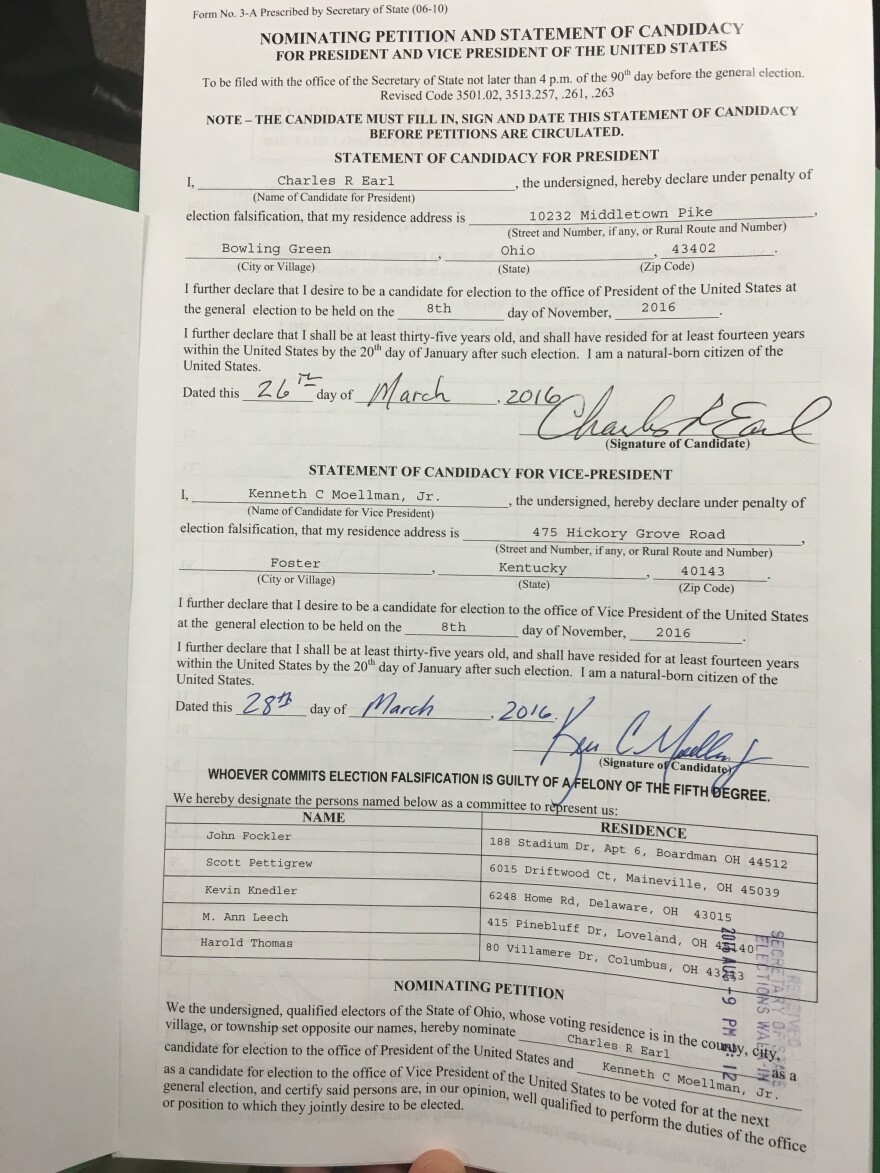 One of the petitions filed in the Ohio Secretary of State