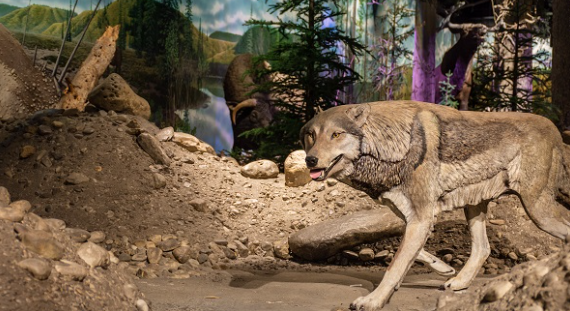 Dire wolves and mastodons will once again roam the halls of the Cincinnati Museum Center (CMC). After extensive updates, the popular Ice Age Gallery will emerge from its hibernation and transport guests 15,000 years back to the Pleistocene on July 1st. The updated gallery will use the past to inform the present and combine scientific analysis with impressive displays of prehistoric animals and haunting landscapes.

CMC’s Ice Age Gallery draws on the strengths of its paleontological collections and immerses guests in the Pleistocene that surrounds them with its sights and sounds. The cool ice cave and trail, populated by giant bison, saber-toothed cats, the Jefferson ground sloth, and the legendary terrifying wolves, return with Ice Age plants, updated lighting and soundscape, and new projections that illustrate how giant glaciers scoured the Miami Valley and formed.

During the Ice Age, the Greater Cincinnati region was a hybrid for megafauna, attracted by natural salt deposits in the area. While mastodons, mammoths, giant bison and towering ground sloths grazed on the plains, terrible wolves and saber-toothed cats roamed the woods. Human hunters also chased the massive beasts. These movements, the onslaught of hooves, paws, and feet, carved the paths that early pioneers and settlers, and eventually modern roads, followed. Evidence of the predator-prey clashes is scattered along the creek beds and buried under rocks throughout the region.

“The effects of the Pleistocene can still be felt today. In fact, the Pleistocene animals discovered near Big Bone Lick started the first paleontological expedition that made them the birthplace of American vertebrate paleontology, ”says Glenn Storrs, Ph.D., Withrow Farny, curator for Paleontology at the Cincinnati Museum Center.

New to the gallery is a fully posable mastodon skeleton that reproduces the size of the prehistoric animal in breathtaking details. An ancient giant bison skeleton will also be on display, along with horns and skull specimens, as well as modern bison specimens showing the similarities and stark differences between the ancestors. The way in which animals were adapted to modern eras by the Pleistocene is further illustrated by several other bone and fossil specimens, including prehistoric dread wolves, saber-toothed cats, North American lions and giant beavers, as well as modern gray wolves, mountain lions, jaguars and beavers. A collection of Clovis points – stone points used as tools and weapons, including arrows and spears – help tell the story of human interaction with other animals that lived in the area at the time.

Also new to the Ice Age Gallery is a more in-depth study of climate change. Geological evidence of climate change is supported by the changes in plant and animal species, including their size, unique adaptations, and extinction. The Pleistocene and its tragic end for many species is an example of natural climate change, but the effects of humans are detailed by modern scientific research – human activity is causing the rapid rise in global temperatures we are witnessing today. Like the animals of climate change at the end of the Pleistocene, scientists with civil science partners are documenting disorders that affect the ability of animals to thrive in changing conditions. Like their (and our) ancestors, species today have to adapt and move or perhaps face extinction. Fortunately, scientific research also shows us how many choices we can make as individuals, as communities, and on a global scale to control how much and how quickly global temperatures can rise.

“We wanted to tell two stories about climate change in our Ice Age Gallery. One of the Pleistocene Era where gradual but natural changes produced significant changes and dire results for some Ice Age species; and one of our current era where rapid, human-made impacts could cause irreversible damage to ecosystems, ”said Elizabeth Pierce, President and CEO of the Cincinnati Museum Center. “The hope is that we can raise this and future generations who may be better stewards of our planet and all of its people.”

CMC’s Champion More Curiosity campaign enables updates to the Ice Age Gallery. This $ 85 million campaign will reinterpret CMC’s exhibits and program. CMC is seeking support from the community to help close the last $ 18 million of the campaign.