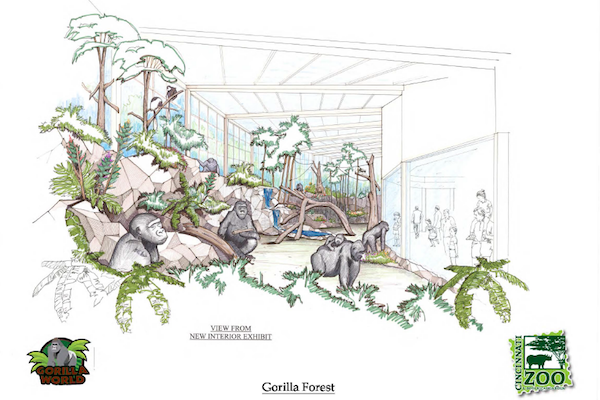 The Cincinnati Zoo & Botanical Garden was named America’s Greenest Zoo in 2010. Since then, the zoo has pioneered eco-friendly initiatives, projects and programs that make it a leader not only in animal welfare but also in the sustainability community.

“The Cincinnati Zoo has undoubtedly been the leader in our industry on this topic,” said Michelle Curley, the zoo’s communications director. “Because of our wide range of different green infrastructures, zoos and aquariums have come to us from all over the world to see how they can engage in similar practices. And not just in our industry, because over the years thousands of engineers, architects and planners have seen how we could create what we have. These professionals then pass that knowledge back to their various clients and urge them to pursue similar projects. “

The zoo’s green status was first achieved through construction projects. Between 2006 and 2016, the zoo received numerous LEED certifications, including two LEED silver, four LEED gold and one LEED platinum certificate.

“We’ll get at least LEED Gold for the Gorilla exhibit,” says Curley. “It includes a really creative rainwater catchment under the new addition as well as various energy efficiency improvements that keep the ecological footprint for this project as small as possible.”

When the Painted Dog exhibition opened in Africa last year, the zoo took green buildings to a whole new level, making it the first zoo in the world to be recognized by the Living Building Challenge. The LBC applies strict standards to the actual performance of a building and requires that spaces not only be energy efficient but also have a positive impact on the community and the environment.

“The LBC is by far the toughest and most aggressive green building standard in the world,” says Curley. “After adopting the LEED rating system with great success for many years, the zoo wanted to take things to the next level and the Painted Dog exhibit seemed like the time to jump.”

In addition to environmentally friendly buildings, the zoo’s sustainability efforts focus on water, renewable energies, solid waste and energy. Anyone who drove past the parking lot on Vine Street of the zoo saw the solar panels, shaded the cars, and powered the surrounding zoo.

“We’re also working on developing a microgrid in the zoo, using battery technology and large-scale generators in conjunction with our extensive solar systems to make the zoo resilient and dynamic when we respond to what’s happening to the zoo’s power grid in our region” says Curley. “This innovative concept would be a first for our region.”

Baby Fiona may be the new star of the Africa exhibit, but the zoo and the sustainability community are fans of the exhibit as it includes a rainwater drainage system that keeps 13 million gallons of water out of the local sewer system each year.

“We are working hard on the next phase of our rainwater initiative to move closer to our goal of no rainwater leaking from our zoo, which in turn will help keep water out of the combined sewers that are helping to pour billions of gallons of sewage out of the river and our neighbors’ cellars, ”says Curley. “We currently track about a third of the rainfall that falls on the zoo’s property and the goal is to be at 100 percent by 2025.”

Although most of the zoo’s sustainability efforts are hidden behind the scenes, the zoo has special programs at the Go Green Garden Exhibit, working with the community, and providing sustainability tips for individuals and families to engage the public in their environmental efforts.

Luke Fickell and Cincinnati crush it on the recruiting route