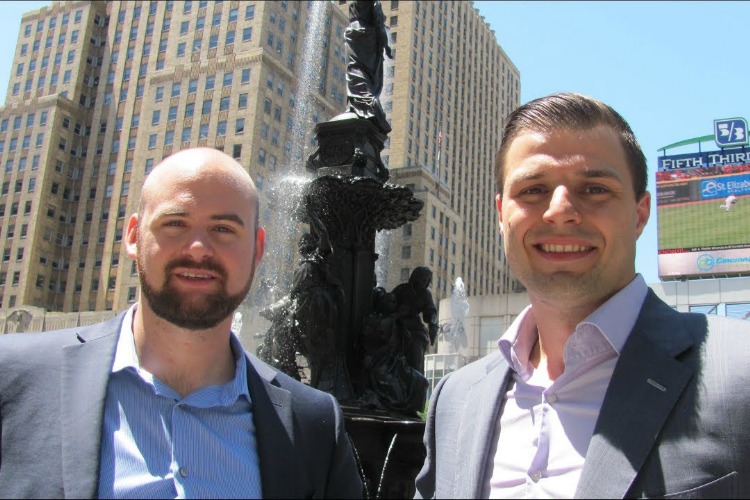 Whether you’re looking for a few extra dollars to finance that beach vacation or need a flexible schedule to care for your kids, a Cincinnati startup that connects gig economy workers with employers has ambitious goals for 2019.

Upshift, based in Green Township, charges customers such as the Duke Energy Convention Center or Marriott a flat rate to find employees who can fill shifts if necessary via a smartphone app and a website. In 2016, founders Steve Anevski and Alex Pantich earned start-up capital with the OTR accelerator The Brandery to put the platform into operation in Cincinnati and Dayton.

By the end of 2018, they had grown to 20 in-house employees, including small employees in Cleveland, Columbus and Nashville, Tennessee.

“2019 is really all about Upshift’s geographic expansion,” said Pantich, with plans to open in 10 to 15 more cities in the Midwest and Southeast, including Detroit. “Much of our expansion is being driven by customers telling us where they need our help.”

According to Pantich, Upshift is also planning to pilot a new platform to provide staff for low-skilled medical positions such as STNAs (state-certified nursing assistants) or LPNs (licensed practical nurses). Medshyft will initially only be available in Cincinnati as they solve the problems before expanding to other markets.

“There are a lot of upshifters who currently work for $ 12 to $ 13 an hour and are the hardest working people in the world. They appear on time every day. They are never late, but they do not always know the right way to reach the next income level, ”says Pantich.

He called it a win-win for employees and medical facilities.

“When you talk to a hospital, a nursing home, etc., they all have problems getting people to work for them,” says Pantich.

Part of Upshift’s appeal is its flexibility. In contrast to conventional temporary employment agencies who assign jobs via telephone calls, Upshifters control the process via the app interface. Upshifters create an account and receive a star rating from employers based on their performance. You can sort the available shifts and request the ones that suit your schedule. Once an employer has approved their shift, all the upshifter has to do is show up, log in on their smartphone, and complete the shift. Upshift takes care of insurance requirements, tax deduction and direct deposits every week.

For Tracy Barger of Fairfield Township, Upshift proved to be a lifesaver. After Barger was fired from the Dead Isotoner Corporation in West Chester Township, he started upshifting to make ends meet.

“I bought a house and renovated it and never had time to work on it before I was laid off,” says Barger. “When I had a day off, I was tired and didn’t want to get involved in a big project on the house. If I had to take off for a few days or work nights with Upshift, I could. “

Barger’s work ethic helped convert her Upshift job into full-time employment at Aero Fulfillment Services in Mason. Even so, she still plans to take up shifts here and there to spend extra cash.

“We have people who were accountants, who make $ 80 a year, who have Upshift on their phone, and use it maybe once or twice a year, and they’re okay with that, while they’d get every call if they did.” would sign up for an agency on the weekend yelling at them for not working, ”says Pantich.

Pantich declined to disclose revenue or exactly how many Upshifters are using the app. As an intermediary connecting workers with employers, Upshift doesn’t qualify for the list of top Ohio employers, but Pantich said it would crack the top 60 if it did. It belongs to companies like American Electric Power, Ford and KeyCorp with more than 6,000 employees in the state of Buckeye.