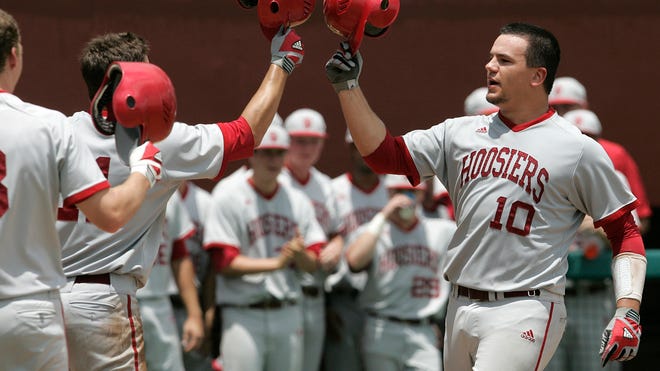 He hit .300 with ease, smashed home runs at a higher rate than he struck out, is tied for Major League Baseball’s best batting average (.500) in All-Star games and didn’t wear sleeves on his jersey.

He’s also the best baseball player to come from Indiana University, and don’t let Kyle Schwarber’s recent torching get in the way.

We’re talking about Ted Kluszewski, whose nickname, “Big Klu,” doesn’t do him justice.

Built like a tight end — because he was one — Kluszewski, who spent most of his career with the Cincinnati Reds, was one of the most intimidating players to enter the batter’s box in the 1950s.

His fun facts compare to names such as Lou Gehrig and Joe DiMaggio. Kluszewski’s 162-game average includes a batting average just under .300 with 26 home runs and 97 runs batted in, but back issues in the latter part of his career skew that.

In his prime, Kluszewski was approaching 50 home runs with batting averages around .320 — a general manger’s dream in today’s game.

His statue sits outside Great American Ball Park in Cincinnati and another deserves to be featured outside Indiana’s Bart Kaufman Field.

From falling off a bench

Kluszewski’s journey to Indiana may be just as unlikely as his path toward baseball.

Kluszewski grew up 30 minutes outside of Chicago in Argo, Illinois, which has since become Summit Argo. He graduated from Argo Community High School in 1942. His mother died in August 1943 and his father seven months later.

According to William A. Cook in his book “Big Klu,” Kluszewski continued working at a starch plant in Argo in 1944. Kluszewski was a football star in high school, but had little interest in baseball.

“To play baseball would have required him to catch a train into Chicago after working in the starch plant all day and play ‘twilight ball,’” Cook wrote. “Kluszewski maintained he didn’t like the game enough to play it on his free time and on weekends.”

Kluszewski continued playing pickup football, where a friend of Indiana football coach Bo McMillin noticed his size and skills. That person, who Kluszewski only remembered as “Mr. Stringer,” relayed the scouting report to McMillin, which eventually turned into a scholarship offer.

World War II depleted rosters throughout college athletics as Kluszewski arrived in Bloomington in 1944. Due to a childhood pelvic procedure, Kluszewski was ineligible for military duty.

However, he was eligible to play as a freshman due to the shrinking number of players available during the war.

Kluszewski played a key role on both sides of the ball during Indiana’s 7-3 season in 1944, which featured an upset of Michigan — the Wolverines’ first conference loss in two years.

His attention shifted to the sport he loved most, basketball, but his career would be short-lived.

Arch Ward of the Chicago Daily Tribune wrote that Kluszewski fell off the bench in his first game and suffered injuries that would keep him out several weeks. Though Kluszewski believed basketball was his best sport, he’d never get the chance to prove it at Indiana.

Kluszewski worked as a waiter for a sorority house to keep up financially and physically in the offseason before the Cincinnati Reds came to town.

The Reds hosted spring training in Bloomington from 1943-1945 to reduce wartime expenses. That’s when Kluszewski was hired to help prepare facilities.

Kluszewski’s baseball background in high school was minimal. His real interest was 16-inch softball, popular in Chicago and played with a larger, softball ball and no gloves.

After the Reds concluded their workouts, Indiana would take the field and Reds groundskeeper Matty Schwab stuck around to watch.

He noticed Kluszewski hitting the ball farther than any Reds player could — tales circulated that Kluszewski could put dents into what is now the Bill Garrett Fieldhouse, well over 500 feet away from the old Jordan Field home plate. Schwab told Reds manager Bill McKechnie.

The Reds had their eyes set on making an offer but McMillin felt Indiana was in position to win the Big Ten title in the 1945 season.

McMillin told Kluszewski that whatever offer the Reds made, they’d make an even better one the following year. Kluszewski stayed and Cincinnati kept an eye on him.

In his lone season with IU baseball, Kluszewski paved his legacy. While the stat-keeping was not near what it is today, it’s believed Kluszewski hit .443 in a season that was on-and-off as U.S. president Franklin Roosevelt died, Italy’s Benito Mussolini was killed, Adolf Hitler killed himself, IU journalist Ernie Pyle was killed and the war eventually came to an end.

That batting average places Kluszewski second on the program’s all-time single-season record, behind Mike Smith who hit .490 in 1992. However, Indiana’s 2021 baseball media guide does not include Kluszewski’s numbers.

He kept his word and returned to help lead Indiana to a football conference title in the 1945 season, catching three touchdowns while tossing around opponents on the defensive side. He even kicked an extra point, returned a kickoff and punted once for 52 yards.

Indiana finished 9-0-1 with the tie coming in a 7-7 game against Northwestern.

To rarely sitting on Cincinnati’s bench

Kluszewski signed for a $15,000 bonus with Cincinnati and a yearly salary of $7,000. The Reds also paid the income tax on his bonus as the team looked to make a turnaround out of a rebuild.

In that stretch, he finished 17th, 7th, 2nd, 6th and 14th in the MVP voting, respectively. He was selected as an All-Star in the latter four seasons.

Here’s a look at his numbers in that stretch:

Kluszewski was beat out by Willie Mays in the 1954 MVP voting. Kluszewski had eight more home runs and 31 more RBI. Mays had better numbers in all three portions of the slash line.

Regardless, he made the right decision by pursuing baseball instead of football.

When the Reds were in Philadelphia during the latter part of the 1951 season, Kluszewski visited McMillin, who was coaching the Eagles

McMillin was upset about a lineman turning down a $7,000 offer, which McMillin felt was generous. Kluszewski was making $17,000 per year at that point.

According to Cook, that was the last time Kluszewski saw McMillin before the legendary Indiana football coach died in March of 1952.

Not only was Kluszewski putting up ridiculous numbers, he stood out doing it. Because of how massive his biceps were, the sleeves on his jersey would hinder his swing.

Kluszewski says in Cook’s book that the Reds front office did what it could to help him out but eventually he “took a pair of scissors and cut them off.”

“They got pretty upset,” Kluszewski said of the Reds front office, “but it was either that or change my swing, and I wasn’t going to change my swing.”

That swing was described as simple but effective with little wrist action or follow-through in a 1956 Sports Illustrated article.

Nonetheless, the new look for Kluszewski became an iconic one. His statue outside Great American Ball Park portrays Kluszewski standing with his bat on his shoulder wearing the sleeveless jersey.

The Reds honored the iconic threads in 2019 by wearing throwback sleeveless jerseys for 15 home games.

Kluszewski’s numbers dipped significantly as back and hip issues kicked in — coincidentally after the MLB instated a rule forbidding cut-off jerseys in 1956 — but he showed a flash of his prime in the 1959 season when he was traded from the Pirates to his hometown White Sox on Aug. 25.

Kluszewski’s short stint with Chicago was a memorable one, and that’s without discussing the time he became the first player to play with a misspelled name on his jersey.

Kluszewski hit .297 with two home runs and 10 RBI in 31 games with the White Sox, but it was in the World Series where he shined.

Kluszewski’s best moments came in Game 1 against the Dodgers. He received a resounding ovation when he was announced as the hometown guy trying to help the White Sox redeem themselves from the 1919 Black Sox scandal.

Kluszewski lined an RBI single in the first inning before hitting home runs in the third and fourth innings en route to an 11-0 win.

In his lone World Series, Kluszewski hit .391 with three home runs and 10 RBI in a loss to the Dodgers. His 10 RBIs remain the MLB record for a six-game World Series.

“He certainly would’ve been the MVP if they’d won,” Hammel says. “He might’ve deserved to be anyway.”

After Kluszewski’s playing days ended in 1961, his next passion came in the restaurant industry.

Kluszewski, a son of Polish immigrants, partnered up with Jack Stayin, a son of Serbian immigrants, to open up steakhouse in downtown Cincinnati.

But six years later, Kluszewski wanted to return to the game just as his name was making its way onto hall of fame ballots — though with unfavorable results.

“When the results came in, it looked like the only way he was going to Cooperstown was if he bought a bus ticket,” Cook wrote.

Meanwhile, the Reds were under a new direction as Bob Howsam stepped in as general manager after the franchise struggled to return to the World Series following their 1961 NL pennant.

Howsam hired Kluszewski as a minor league hitting instructor in 1968 before promoting him to the major league club ahead of the 1970 season.

Kluszewski was in charge of a core that included players such as Johnny Bench, Pete Rose, Joe Morgan, Ken Griffey and Tony Perez. His approach was simple: Never give out advice until someone asked for help, and when adjustments were needed, it was as simple as telling players what they were changing from their original style — just go back to what you already knew.

The reign of the famous “Big Red Machine” featured a stretch of five NL Western Division titles in seven years. The team won back-to-back World Series titles in 1975-76, with Kluszewski playing a major role in the wins and the careers those stars put together.

“There are a lot of coaches who have received more notoriety than Klu, but I don’t think anyone’s had more success,” Rose told the Associated Press following Kluszewki’s death in 1988. “He was just a prince. I never heard a bad word said about him. He was a nice man, a gentle giant.”

After following up the championships with back-to-back second place finishes in the division, most of the staff was fired.

Kluszewski received just 14% of the vote in his final hall of fame ballot in 1981 and has never had a real chance since.

As for his restaurants, the last of the six that he and Stayin operated closed in April of 1978 — six years after Kluszewski sold the remainder of his stock to Stayin.

Kluszewski suffered a heart attack in 1987. The Reds announced his retirement in the later part of the year.

IU legacies for Kluszewski and Schwarber

Recency bias, along with an unreal stretch of games in June, leave many assuming that Kyle Schwarber is the greatest baseball player to come through Indiana University.

While there’s no denying what role Schwarber played in IU’s rejuvenated baseball program, many fans won’t let you forget about Kluszewski.

Kluszewski was inducted into Indiana University’s Hall of Fame in 1982.

The lack of statistics along with the structure of MLB makes the debate between the two IU greats tougher.

Many of those numbers are tough to find for Kluszewski. He was also signed rather than drafted.

What can be agreed upon is the stature both have with Indiana athletics and the statues that deserve to soon be erected.

“Putting those two guys out front to meet you as you’re coming in would be a great symbol of IU baseball,” Hammel said.