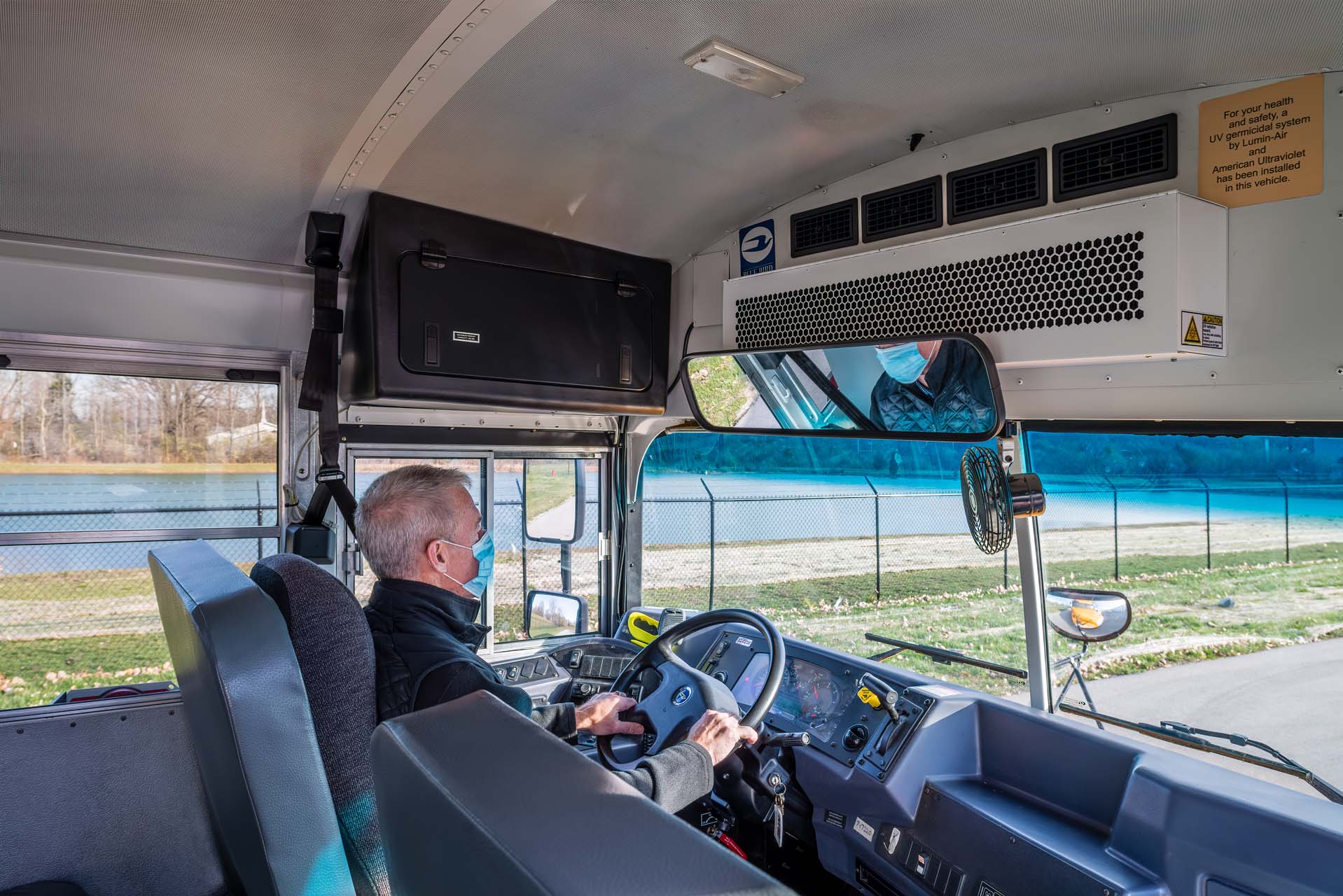 As students nationwide are back in school, not only are air quality considerations outside of the school bus important but also air quality inside the vehicle.

As federal leaders and industry professionals consider the options of electric school bus technology, air purification companies shared that the fuel or energy being consumed doesn’t matter when windows are down and buses are driving along a busy highway. Any fossil-based fuel pollutants, especially diesel, are still finding their way into the school bus and are ultimately impacting a child’s health.

Despite viruses and disease being present for years, the COVID-19 pandemic has shined a brighter light on the importance of clean onboard air.

Daniel Hagström, the CEO and co-founder of CabinAir, an in-cabin air purification system for cars, trucks and other vehicles, explained to School Transportation News the awareness that now surrounds clean air. “Viruses and bacteria; that’s nothing new,” he said. “It’s new from an awareness perspective for the world right now due to COVID-19 … but bacteria and viruses, have always been there.”

He added that these types of illnesses will continue to be there long after COVID-19 as well. The Swedish-based company has yet to install its product into the U.S segment but has done pilot projects for buses in China. Hagström said they are currently in discussion with several bus manufactures and owners in the U.S. about projects and installation.

There are two products for buses already on the road, one that focuses on the driver component and another for the passengers. Hagström explained that the main difference between the two is the driver solution uses the air distribution fans that are already in the vehicle, whereas the system in the cabin has its own integrated fan. The devices for the passenger component can either be mounted to the roof or under a seat. He added that in a 76-passenger bus, a school district would most likely need two to three devices to target the space effectively. Plus, mechanics can do the installation themselves.

Hagström referred to the school bus as the driver’s office, and drivers spend most of their working time while on the road. He noted that most of the air coming into the vehicle is coming from the outside. But for student passengers, less air comes from the outside, and most of the pollutants are created inside the cabin. This enables viruses and bacteria to spread easier.

Despite the bacteria and viruses that have been present in school buses for years, the adoption of air filtration systems has been slow. For instance, as indicated by a School Transportation News survey conducted in March, only 5 percent of 186 respondents said they had at that point installed air filtration systems to address COVID-19.

In addition, 10 percent of 66 respondents to an April survey stated that they were planning on using federal funds to purchase ventilation systems for their school buses. [Editor’s Note: Air purification systems clean and reuse the same air, while air ventilation pushes out the old air and brings in new air.]

In May, United Safety presented a webinar with School Transportation News that discussed its two technology solutions that provide a sterile environment for children riding the school bus. With all the federal funding available, the webinar looks at why utilizing funds for air technology is beneficial to students.

The company’s Active Air Purification system uses PHI-Cell technology, which includes UV light and ions for continual sanitizing of the air and surfaces inside the school bus. Meanwhile, the company’s Aegis surface protectant creates a surface of microscopic spikes that purportedly repel microbes.

Additionally, Jackson Control released its AirKoi Mobile Air ionization technology that claims to reduce airborne pathogens by up to 99.7 percent, with a 90 percent reduction of SARS-CoV-2. The ionization devices are mounted and installed within existing air distribution fans within the school bus. Its solution will produce positive and negative ions to effectively reduce pathogens and other airborne contaminants, while not harming occupants.

The company stated in a release that ionization allows for easy installation that maintenance personnel can do without assistance. The system is also low maintenance and can be mounted into the existing air distribution system.

Dan Fillenwarth, president of Lumin-Air, said the interest in air purification systems has resembled a rollercoaster ride since the onset of COVID-19. The virus was initially believed to be spread on surfaces, and the industry focused on cleaning high-touch areas, which is something many districts are still doing. However, last fall, the U.S Centers for Disease Control and Prevention (CDC) acknowledged that the main way COVID-19 is spread is through the air.

Fillenwarth explained that Lumin-Air took technologies like Ultraviolet Germicidal Irradiation (UVGI) and filtration systems that have been used in buildings and started applying that technology to the school bus. The Lumin-Air systems don’t add the harmful chemicals, ions or gases that kill cells into the air people breathe. Instead, they remove and reduce containments in a very contained space. As the air circulates through a MERV-13 equivalent filter and the bus’s HVAC system, particulars are removed. A high-level dose of UV light is introduced to the air, which destroys the DNA and RNA of virus and bacteria cells. The UV is kept inside an enclosure so that it does not escape and harm bus passengers, Fillenwarth added.

“Many schools are promoting that they’ve changed to MERV-13 filters for their classrooms, as recommended by experts to reduce indoor contaminants. Why wouldn’t this level of filtration also be needed on buses which have a much higher people density and have poorer outside air quality?” he asked. “On average, it only takes about 1 percent of Elementary and Secondary School Emergency Relief (ESSER) funds to provide a turnkey solution including 12 years of replacement filters for buses, which have the poorest air quality and the highest density of anywhere in the school.”

He added that the filters are lasting four times as long as a standard bus filter. Lumin-Air recommends changing them at least once a year. Fillenwarth added that these types of systems are not only going to benefit school transportation during COVID-19, but also when other contaminants are in the air, such as influenza, and whatever the next respiratory virus that hits the U.S. is.

A study published in Influenza and Other Respiratory Viruses found that 1,027 children missed 2,295 days from 2012 through 2015 because of medically attended acute respiratory infections. Influenza accounted for 40 percent of illnesses and 47 percent of days missed, the survey reported.

“This is a natural progression of what we should be doing not only in school buses but in every building where there are people congregating,” added Andrew Desmarais, chief operating officer at Lumin-Air. “It goes beyond the flu and beyond COVID-19. Simply reducing particulate and other contaminant concentrations in the air can help positively impact the health of your riders and operators. … You have [a vehicle] that’s physically on the road, taking in exhaust fumes, other pollutants, and crowded with people breathing in and breathing out potentially infectious areoles from others and in some instances our most vulnerable population is riding that bus and breathing those things in. … the methods we employ can help and reduce those contaminants and make it safer, cleaner and healthier to breathe that air on the way to and from school.”

Fillenwarth added that the CDC has released guidelines and documentation that encourage district leaders to increase air filtration in schools and to supplement with UV, especially if outside air cannot be added. “We just accept that we’re going to have a certain [number] of deaths among the most vulnerable and lots of missed school days during the flu season every year,” Fillenwarth stated. “In the 1800s, it was taken for granted that a certain number of people were going to get sick and die every year from cholera and dysentery. A particularly bad outbreak in the mid-1800s prompted England to clean up its drinking water system, mostly rendering those diseases in England a distant memory. Has our current pandemic been bad enough to prompt us to finally clean up the air we breathe?”

Meanwhile, school bus HVAC manufacturers American Cooling Technology (ACT) and ProAir introduced their own air ventilation solution. The product can be installed in the ventilation system in an onboard evaporator, whether that is used for air conditioning or not.

In addition, air technology solutions were also prominent at the STN EXPO Indy Trade Show on Oct. 4. For instance, EXPO first-timer airlabs showed off its AirBubbl, a cylinder-shaped, in-vehicle air purifier that can be installed in multiple places on the bus ceiling. The device can also be used indoors on a desk or nightstand.

Meanwhile, Paul Baczewski, the national account manager at Webasto Group, told School Transportation News that the company’s air filtration system, which was made available to school buses last September, is in high demand.

He noted it’s not just about attacking viruses but improving the overall air quality of the vehicle. The Webasto HFT 300 and 600, he said, are capable of removing 99.995 percent of airborne particulates. However, one of the biggest conditions to air filtration he noted, is removing the filters.

“In regards to the disposing of the expired filter, you also need to consider the process of extracting the filter from the unit,” he explained. “You obviously do not want to stick your hand into the unit and grab a filter, which [has] been exposed to and trapped molds, pollens, carcinogens and viruses.”

The Webasto replacement filter is equipped with a hardware kit, which Baczewski said allows the user to cap both ends of the filter and remove it without any physical contact. It is then placed into a supplied plastic bag and put into the box, which the replacement was supplied with.

“Provided the filter is not being used in a medical environment, it is not considered to be a biohazard,” he added.

Baczewski wrote a blog for STN for February that discussed the differences and considerations in air technology.

Meanwhile, Trans/Air has invested in a variety of technologies and options that will give the industry a choice of what best suits its needs. Company President Rick Lehnert said contractors and school districts alike have shown interest in the new technology.

“Important in the process is to do no harm. You do not want to race to install or use something that is not proven or carefully evaluated for safety,” he discussed of all the available options. “And because of the huge backlog of products lining up at the Environmental Protection Agency to get approved this has created a bottleneck. I understand the EPA is in uncharted waters with the level of requests and activity, given there are a lot of companies racing to enter the market with the golden verbiage ‘proven to deactivate or kill COVID-19.’ In some cases, the testing protocols may not exist and that is another challenge to get the EPA testing and approval done.”

Trans/Air offers three products, one of which being a HEPA-type pleated filter, the second an ION generator, and the third focuses on the use of ultraviolet light. The HEPA-type pleated filter produces a filter with a proprietary citrus paste, Lenert explained, that is proven to deactivate viruses, including COVID-19, bacteria, molds, and other harmful particulates. The kits to install these filters can either be installed in new vehicles during production or retrofitted onto existing Trans/Air evaporator units installed in buses.

Additionally, Trans/Air offers the installation of an ION generator into the evaporator or any other air-handling device. It will circulate positive ions that actively attach to viruses, bacteria, or molds to deactivate them and significantly reduce the risk of transmission. The third option being designed into its systems shines Ultra Violet light onto a proprietary coating, which then produces a safe level of Ionized Hydroperoxides. This actively deactivates viruses, bacteria, and other microbes.