Statues, awards for people with bad values ​​that are not new to sport 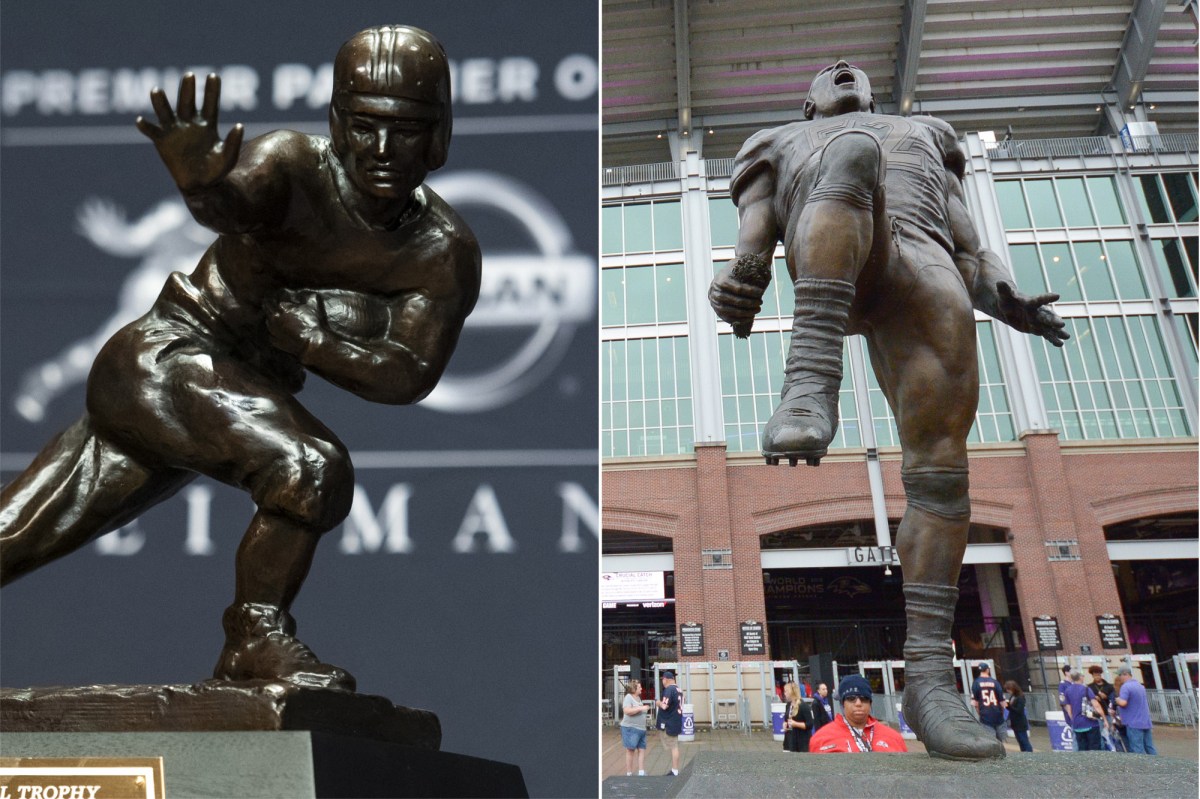 To think that Mike Francesa asked Buddy Holly not to board this flight.

What’s going on now – the indiscriminate, often reckless and wanton destruction and the desirable, cosmetic reconstruction of American history – is nothing new in sport.

The Heisman Trophy was first awarded in 1935. Named for John Heisman and introduced to the best college football player each season, candidates had to meet the archaic qualification of a young gentleman and athlete in order to “pursue excellence with integrity.”

In other words, even in 1935 it was a hard swallow considering coach Heisman’s Georgia Tech team narrowly defeated Cumberland College 222-0 in 1916 (confirmed by ESPN).

The Eddie Robinson Award, named after the longtime coach of grambling football in 1987, is presented annually as NCAA Division I Coach of the Year.

Always ignored by the media, is that Robinson, the black coach of a black team, was notorious for weekly atrocities against black opponents. Robinson enjoyed humiliating opponents.

ESPN gave its humanitarian award to Muhammad Ali who popularized and helped maintain trash talking and public disrespect for opponents. Among the opponents he destroyed were Joe Frazier, whom he racially derided as a “gorilla,” and former heavyweight champion Floyd Patterson, a gentleman and athlete whom Ali had unnecessarily belittled.

Ali, with the full indulgence of the media, called Cassius Marcellus Clay his “slave name,” which was extraordinary nonsense. Cassius Marcellus Clay was a brave newspaper publisher whose Lexington, Kentucky store was set on fire because of its strong abolitionist content. It reopened in Cincinnati, where he continued his anti-slavery activism.

But now it seems too late for Teddy Roosevelt, as even the mayor of NYC is playing ignorant or not knowing Roosevelt’s story. In 1901, Roosevelt knowingly enraged much of America, especially southern whites, by inviting black educator Booker T. Washington to the White House.

The New Orleans Times-Democrat stated: “When Mr. Roosevelt sits down for dinner with a negro, he declares that the negro is the social equivalent of the white man.” A Memphis newspaper reported that Roosevelt was “the bloody outrage that has ever been perpetrated by a citizen of the United States.”

But get out, Teddy. The new story is in town. Yours is a statue of limitations.

The same goes for you, Matthias Baldwin. A mob in Philadelphia posing as racial activists (or at least identified as such by the media) decided that his statue should be desecrated and covered with spray paint. Did the Vandals know – or did they care – that he was a brave early abolitionist? 1837 – 26 years before Lincoln’s declaration of emancipation – Baldwin campaigned for the right to vote for blacks.

But two weeks ago a mob decided Baldwin had to go.

One statue that I suspect is safe is the one in Baltimore of NFL headhunter Ray Lewis performing his post-game blood dance.

Blood? Lewis put an obstacle to justice in an unsolved, double stabbing murder of two black men. The blood-soaked white suit Lewis had seen that night was lost, and Lewis curiously paid the families of the two men killed to come to an agreement.

The NFL would eventually hire him to push products. Roger Goodell hugged him on the field before a Super Bowl. ESPN hired him to try talking about football. As a lifelong bachelor, he has six children from four women. American dream. I think his statue is pretty safe.

Ray Lewis on, Teddy Roosevelt trending homeless. Soon common sense will be forbidden and driving the main road will no longer be an option.

When you point out fuzziness in rap lyrics, Rosenberg thinks you are racist

As an outright racist, Marge Schott’s name is being deleted as the namesake for the University of Cincinnati baseball stadium, and ESPN Radio New York’s Peter Rosenberg did not spit out that I am a racist – since I am not, I’m not afraid called one – none better time to double the two misanthropes.

If I am a racist, how would Rosenberg explain what begins on page 243 of Mike Bass’ book “Marge Unleashed” about Schott?

“It would be an important day for the owner of the red one, but not because of her apology. On this day, halfway across the country, the story of Marge Schott finally escaped the invisible walls of Cincinnati.

“Phil Mushnick, the entertaining and disrespectful columnist for the New York Post who loves to expose the hypocrisy and idiocy in sports, followed the Sabo case more than most out of town journalists and pioneered trial charges.

“On Friday, Mushnick published part of the excerpts from Marge’s deposit in his column. “Their defense – stupidity – would be permissible if only they were thought so stupid,” wrote Mushnick. “It is up to all right-wing sports fans to take note of some of them [racist] Dialogue from the suit’s deposit negotiation. ‘”

MLB, initially unmoved, then suspended Schott for a year.

Back to Rosenberg, a stubborn coward. He claims my attacks on rap music are racist if he knows that my attacks are aimed at the vulgar sexual humiliation of women, love affairs with guns, and the regular reference to black men as an N-word. World we live in. Complain about the use of the N word and you will be declared a racist.

Rosenberg has to be for such content, so he pissed me off. Fine. But he can’t turn me into antisocial, backward-looking garbage, especially not the N word. I was raised to think of it as the worst.

So I asked him to read some rap lyrics on his ESPN sports show, right in the place where he staged his first attack on me. He refused, demonstrating both my point of view and the lack of a touch of courage in his beliefs. And that challenge, tough guy, remains.

Returning a cardboard box would be a game of chance

So let’s say Craig Carton returns to WFAN. How is he going to handle all of these gambling ads? Meanwhile, readers are wondering why Carton only served one year of a three and a half year prison sentence. Why? Perfect presence.

Reader Len Geller finds it ironic that Tiz The Law won the Belmont at a time when New York was overwhelmed by lawlessness. It will soon be renamed Twas The Law.

Poor Jessica Mendoza. Apparently no one on ESPN told her that viewers weren’t watching her speak like she was reading “How To Play Baseball” aloud from the primer.

Lookalikes: Submitted by reader James Vespe – Trump rally in Tulsa last week and the top deck of a Marlins game in Miami.