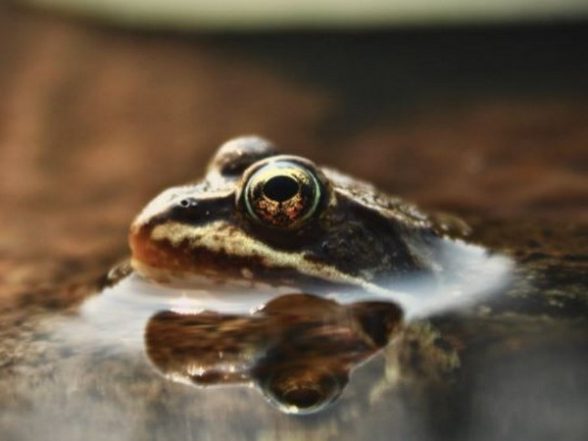 Washington [US]Aug. 8 (ANI): Researchers from the University of California, San Francisco (UCSF), Stanford University, and the California Academy of Sciences (CAS) have conducted a new study to find out how poisonous frogs and birds avoid themselves to intoxicate yourself.

Their study, published in the Journal of General Physiology (JGP), suggests that instead of developing resistant versions of the target protein of the toxin, the animals produce “toxin sponges” that can wipe up the venom and prevent it from exerting its lethal effects.

Many poisonous animals protect themselves from predators with toxins that cause paralysis and cardiac arrest by attaching to voltage-gated sodium channels, important proteins that deliver electrical impulses in neurons, muscles, and the heart.

Batrachotoxin, for example, is an extremely potent sodium channel toxin found in poisonous Pitohui birds in New Guinea as well as in several poisonous frog species in Colombia. The poisonous golden frog, Phyllobates terribilis, carries an estimated 1 milligram of batrachotoxin in its skin glands, enough to kill between 10 and 20 people.

Also read | Will Cristiano Ronaldo play Barcelona in the Joan Gamper Trophy 2021 tonight? Will CR7 be part of the Juventus starting XI?

But despite their own voltage-gated sodium channels, pitohui birds and poison frogs receive batrachotoxin from the insects they eat and store the venom for long periods of time. So how do these animals avoid poisoning themselves?

One possibility is that the animals have developed batrachotoxin-resistant sodium channels. “However, there have been no functional studies on poison frog or Pitohui sodium channels, so it remains unclear whether batrachotoxin-bearing animals rely on changes in their sodium channels or alternative mechanisms of resistance,” says UCSF Professor Daniel L. Minor, Jr.

By comparing the effects of batrachotoxin with saxitoxin, a known paralytic shellfish venom, Minor and colleagues suggest that these venomous species of birds and frogs instead rely on “sponge” proteins that mop up toxins and prevent them from binding to sodium channels.

In fact, the mutation impaired the function of the channels even in the absence of batrachotoxin. “Taken together, our observations challenge the idea that the sodium channel mutation is the strategy of autoresistance to batrachotoxin for poisonous birds and poison frogs like P. terribilis,” Minor said.

Abderemane-Ali et al. suggest that an alternative mechanism of autoresistance is at play: the animals produce sponge proteins that ingest toxins and prevent them from binding to sodium channels. In fact, they found that while batrachotoxin binds to isolated frog sodium channels, it does not interfere with the channels when injected into live poison frogs.

Researchers have not yet identified proteins that can uptake batrachotoxin. However, bullfrogs produce a protein called saxiphilin, which can bind tightly to the related poison saxitoxin. Minor and colleagues found that sodium channels isolated from P. terribilis are very sensitive to saxitoxin, but that this is reversed in the presence of saxiphilin.

“This shows that high affinity toxin sponge proteins are able to prevent the action of low molecular weight toxins that target sodium channels and supports the idea that toxin sequestration mechanisms can protect poisonous animals from auto-intoxication,” Abderemane said -Ali.

Minor added, “Not only could these sequestration strategies provide a general means of protection from toxins, but they could also act on pathways involved in the safe transport and concentration of toxins in key defense organs such as the skin. Understanding these pathways can lead to the discovery of antidotes “against various toxins.” (ANI)