P&G is rebranding and reconnecting the Cincinnati Music Festival 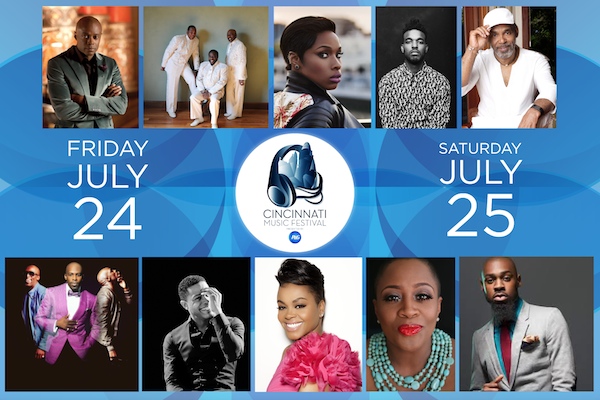 Cincinnati brand giant Procter & Gamble is helping rename and freshen up another local institution by taking on the role of presentation sponsor for the 2015 Cincinnati Music Festival from July 24-25 at Paul Brown Stadium. It is the beginning of at least a three-year commitment as a main sponsor and possibly a longer relationship.

The Cincinnati Music Festival, which has been presented annually since 1962, has been run by a variety of names – from the original Ohio Valley Jazz Festival to the Kool Jazz Festival to a 10-year run as the Macy’s Music Festival through 2014. It evolved along the way become one of the biggest R&B / soul music events in the country with stars like Stevie Wonder, Kanye West, Mary J. Blige, Aretha Franklin and James Brown.
William Gipson

Its success has spawned similar music festivals in other parts of the country, including the Essence Festival in New Orleans, which P&G has sponsored through its branded platform My Black Is Beautiful for the past eight years. When the lead sponsorship slot opened at the music festival in his hometown, P&G was reinforced.

“As Queen City is experiencing a renaissance, P&G is committed to contributing to further progress in Cincinnati, where many of our employees live and work,” said William Gipson, senior vice president of Procter & Gamble, Global Diversity. “We view the Cincinnati Music Festival as an essential event that will further promote and promote diversity and inclusion in our community.”

The Cincinnati Music Festival has long been known for its ability to attract visitors outside of the city. Busloads of music fans from Chicago, Detroit, Atlanta and many other cities flock here. P&G is striving to involve the locals more than ever this year.

Local artists have also been included in the festival program. Four local acts will perform at the Tide Pod Plaza in front of Paul Brown Stadium each night, starting about two hours before the gates open. Inside, P & G’s Bounty brand will host the festival’s first breakdance exhibition in collaboration with the OTR-based Elementz dance organization.

P&G coordinated the planning of Radio One’s annual Women’s Empowerment Expo on Saturday to offer daytime programming during the festival. The event will take place at the Duke Energy Convention Center from 10 a.m. to 4 p.m. and features keynote speaker Iyanla Vanzant, executive producer and host of Iyanla: Fix My Life on the Oprah Winfrey Network.

Gipson says the added day component helps “underscore the importance of celebrating diversity in our community. We bring together natural community connections that encourage greater awareness, excitement, and local participation. “

“A weekend full of beautiful memories”

Activations include a Patio Spa that offers CoverGirl and Olay Mini Makeovers, a Crest Smile Photo Booth, and Charmin products in all Club-level toilets and in the VIP Suite. As mentioned earlier, Tide is hosting live music outside the stadium and Bounty is sponsoring the Elementz breakdancing.

“At the center of our Essence Festival activation, we learned the importance of delivering engaging experiences that celebrate, connect, and excite African American women through remodeling, dance, photo opportunities, surprise guests, and freebies,” says Gipson. “We plan to offer our CMF guests a similar experience that we hope will bring them a weekend full of great memories.”

“It’s no secret that we need to win with the multicultural consumer, especially African American and Hispanic Americans, in order for P&G to grow,” says Gipson. “One way to reach the African American consumer is through events like the Cincinnati Music Festival and the Women’s Empowerment Expo, where we promote product awareness and testing.”

Tickets for the Women’s Empowerment Expo 2015 on Saturday are $ 15.