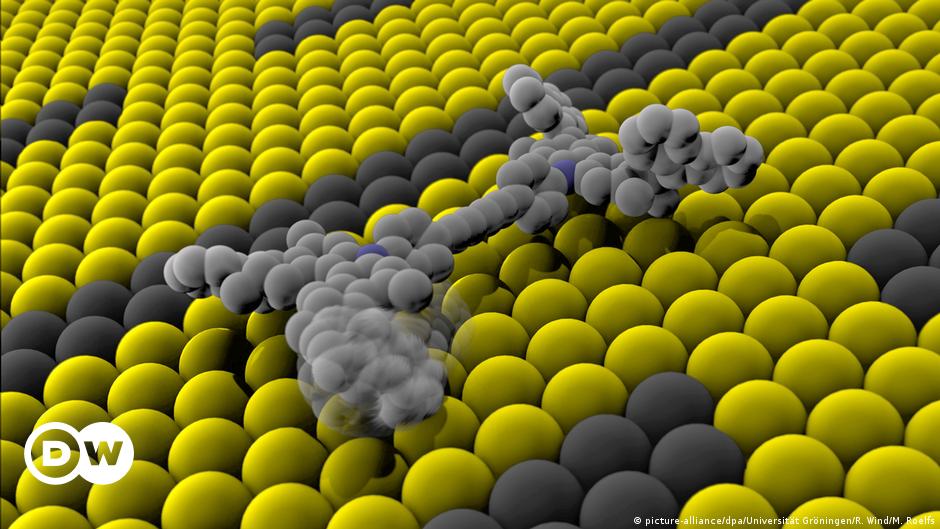 It was bagels and pretzels on Tuesday. They used it to demonstrate the concept of topology for which David Thouless, Duncan Haldane, and Michael Kosterlitz received the Nobel Prize in Physics.

A day later, they used two interlaced pretzels to symbolize the achievements of this year’s Nobel Prize winners in chemistry.

The three chemists synthesized molecules that move like machines when energy is applied, for example in the form of light. They work like an electric pump that starts as soon as it is plugged in and switched on.

From pretzels to tiny motors

Fraser Stoddart then created a kind of “molecular elevator”, as Olof Ramström of the Nobel Prize Committee put it: two nested molecules that you can jump back and forth from – like a switch that is in an off or on position.

Later, in 1999, Bernard Feringa built the first molecular motor in which two molecules rotate around each other like two motor blades under the action of UV light before they return to their original position.

Feringa even created a car from two molecules that moved in a Petri dish. Its movement could only be seen with microscopes that work at the atomic level, like a scanning tunneling microscope.

Scientists are now even holding so-called NanoCar races, in which molecular cars compete against each other. How Sauvage created a pretzel-like molecule

What is it good for?

Before journalists could ask about the Stockholm announcement, Ramström answered the question everyone was talking about: What is it good for? Currently, says Ramström, the construction of molecular machines is limited to basic research.

But then he added, “It’s similar to how electrical machines were developed in the 19th century. Now these machines are everywhere.”

Who would have thought in the 1830s that various spinning cranks and wheels would lead to electric trains, washing machines, and fans?

“I feel like the Wright brothers who flew for the first time and people were asking, why do we need a flying machine?” said Bernard Feringa.

Although there are currently no specific applications, the researchers have plenty of ideas on how these new types of molecular systems can be used. This is how Feringa’s first molecular engine worked

Crazy ideas for the future

“Molecular machines could lead to pharmaceuticals that can be switched on and off by light in order to minimize their side effects,” says Rainer Herges, chemist at the University of Kiel.

This could also be an advance into the age of molecular electronics, in which electronic components are no longer made of metal but of organic molecules, which makes their further miniaturization possible.

Indeed, this would be a sought-after solution to future energy problems.

Rainer Herges does research on molecular machines himself.

He created a tiny excavator that can hold other molecules with its four tentacles and place them elsewhere when they are exposed to a wavelength of light.

These machines can potentially move medicines or other compounds around the human body.

“We’re also working on new types of MRI contrast media,” Herges told DW. “They can be switched on and off with a light, which would be very useful for operations on a stroke patient.”

The molecular engineer Herges is happy that his research area has been awarded a Nobel Prize. “It shows that we are on the right track and that we recognized the potential early on,” he says.

Herges describes the award winners as “committed and fully focused on their research”. Nevertheless, they are “people you can have a drink with”.

Wesley Browne works with Bernard Feringa at the University of Groningen. “As a scientist, Feringa is crazy,” Browne says with a laugh to DW. “He never allows the law of thermodynamics or physics to get in the way of a good idea.”

Johannes Teichert from the Technical University of Berlin, who did his PhD at Feringa, adds: “He is very creative. Nine out of ten of his ideas may be crazy and not work, but one of them is brilliant.”

Cars and micrometer-sized excavators that you can’t even see – you might have to be a little crazy to come up with ideas like this.