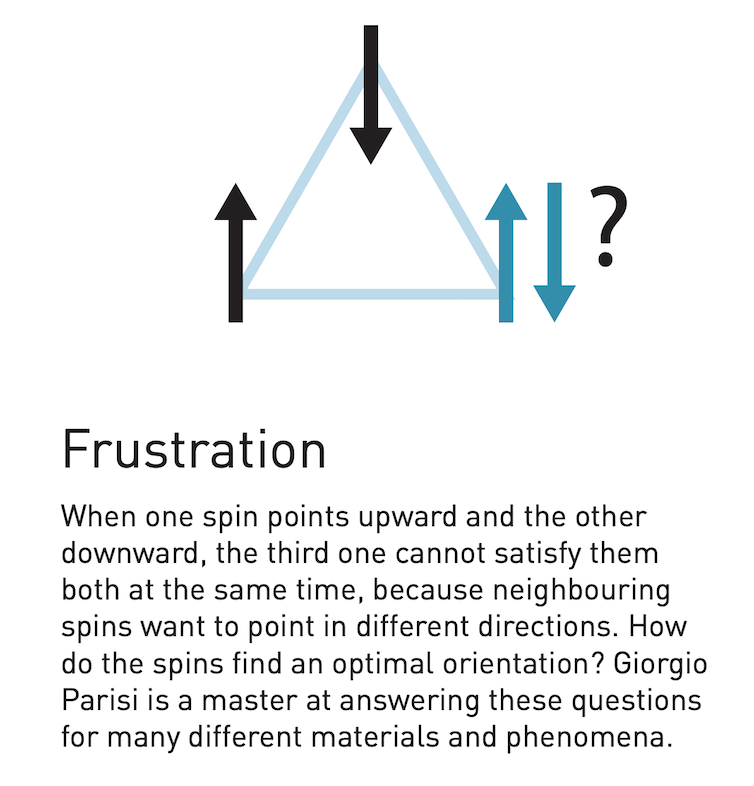 I am pleasantly surprised that the field of complex systems, which is quietly pushing the limits of theoretical research in physics, has received this exposure

The 2021 Nobel Prize in Physics goes to the Italian Giorgio Parisi, the Japanese Syukuro Manabe and the German Klaus Hasselmann for their “groundbreaking contributions to the understanding of complex systems”.

When I heard the news, I could hardly believe it. I studied my master’s thesis and my doctorate in theoretical physics with Professor Parisi at the Sapienza University in Rome.

If I say that I disbelieved, don’t get me wrong. Of all the people I have met in my research experience – perhaps in my life – he is without a doubt the most brilliant. So I was not surprised by the Nobel Prize Committee’s decision to make him a laureate. Rather, it was her decision to recognize his “contributions to our understanding of complex systems” that piqued my interest.

This award for Professor Parisi, shared with groundbreaking meteorologists Professor Manabe and Professor Hasselmann, is an amazing recognition of an entire field of research – perhaps a little less glamorous than general relativity or string theory – that seeks to understand and model what we use in physics Calling “complex systems”.

This includes things like climatic ecosystems, financial systems, and biological phenomena, to name a few. The variety of complex systems – represented in fluctuating markets and streaming starlings – makes it very difficult to derive general rules for them. Parisi’s work has enabled us to derive unprecedented conclusions about such systems that, on the surface, are random, unpredictable, and theoretically impossible to model.

A stepping stone to modeling complex systems is the theory of “disordered systems”. These are essentially systems in which different pairs of elements experience different, potentially conflicting forces that can cause the elements to become “frustrated”.

In this example, one corner of the triangle is frustrated. Johan Jarnestad / Royal Swedish Academy of Sciences, CC BY-NC

Professor Parisi’s research has clarified what happens when frustration occurs in disordered and complex systems. He found that complex systems can remember their trajectories over time and can get stuck in suboptimal states for a long time.

In our party example, imagine Alice, Bob, Charlie, and other guests switching talkgroups and partners infrequently, hoping to find the best group of people to chat with – but may never find. This is the suboptimal state in which complex systems can get stuck.

One of the many theoretical tools that Professor Parisi used to establish his theory is what is known as the “replica trick” – a mathematical method that replicates a disordered system multiple times and compares how different replicas of the system behave. You can do this, for example, by compressing marbles in a box that form a different configuration each time you perform the compression. Parisi knew that repeating a lot of it could produce revealing patterns. 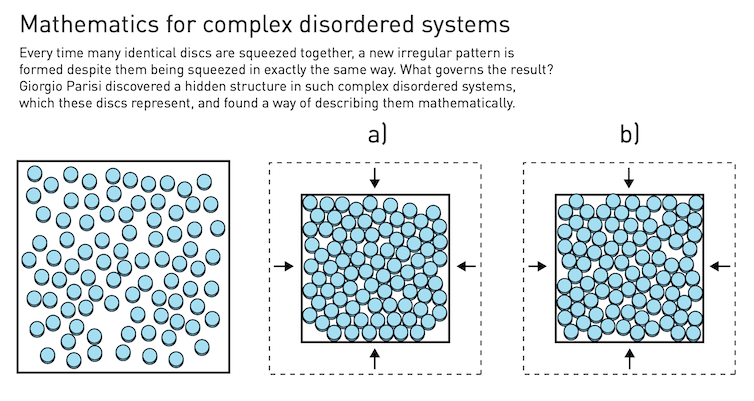 The replica trick can be done by compressing balls in a box. Johan Jarnestad / Royal Swedish Academy of Sciences, CC BY-NC

This method is now one of the few theoretical pillars for the development of the entire theory of complex systems as we know it today. Professor Parisi’s theory has been shown to provide reliable predictions about the statistical properties of complex systems ranging from supercooled liquids (liquids below their solidification temperature), frozen liquids, amorphous solids like glass, and even swarms of starlings.

The theory of disordered systems enables us to understand the beautiful creation of coherent flight patterns in close flocks of birds – which, despite adverse conditions, manage to stick together and form huge groups.

Parisi has investigated how flocks of starling behave under predation by peregrine falcons.

The same framework has been used to understand the Earth’s climate. The meteorologists who share the Nobel Prize with Professor Parisi will have relied on breakthroughs in theoretical physics to create the models we use today to reliably demonstrate global warming.

I had the opportunity to discuss these issues with Professor Parisi in Rome while his experiments with flocks of birds were taking place and during his computer simulations on the behavior of glass. Knowing a little of his opinion, I’m not at all surprised that he won the Nobel Prize in Physics.

But I am pleasantly surprised that the field of complex systems, which is quietly pushing the limits of theoretical research in physics, has received this exposure. This Nobel Prize has given this fascinating field of contemporary physics new legitimacy – and hopefully new minds.

This article was republished by The Conversation under a Creative Commons license. Read the original article.

We are a voice for you; you were a support to us. Together we build journalism that is independent, credible and fearless. You can help us further with a donation. This will mean a lot to our ability to bring you news, perspectives and analysis up close so that together we can make change.