“My father can finally come home”: Supporters celebrate that Lucio Perez is leaving the sanctuary after three and a half years 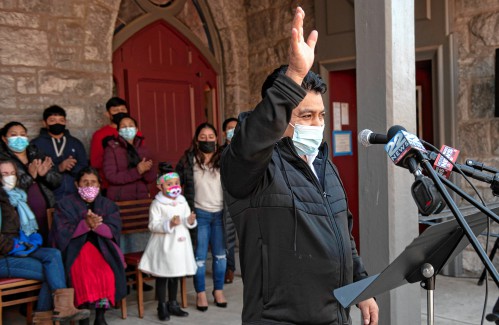 AMHERST – After three and a half years, Lucio Perez can leave the First Congregational Church without the risk of being deported.

Perez, a Guatemalan immigrant, began church service in October 2017 after his deportation was refused entry under the Trump administration.

“It wasn’t easy … I never thought it would take so many years,” he said on Saturday, speaking to the newspaper through a translator.

Earlier this month, Perez was granted a postponement of his deportation by the US Immigration and Customs Service.

“This is what it looks like when love wins,” First Church Rev. Vicki Kemper told a crowd that gathered in front of the church to celebrate Perez leaving.

Kemper choked when she introduced Perez and called him “the man who showed us what faith is, what strength is, what courage is, what love for family is. And today he shows us what freedom is. “The crowd clapped.

“There really are no words for all the things you have all done for me and my family,” Perez told the crowd with an English translator in Spanish.

He thanked the Church, the Pioneer Valley Workers Center, and others who had assisted him during his stay. People volunteered to sleep in church making sure he was never alone and drove his family from Springfield to Amherst on regular visits, Kemper said. Members from more than a dozen denominations brought food to Perez regularly, she said.

Perez’s wife, Dora Perez, told the crowd in Spanish with an English translator that there are other families in similar situations. “I want to tell you there is hope,” she said. “I hope we keep up the pressure so that other families like my family can experience freedom.”

Lucio Perez had a similar message for those currently in the sanctuary. “Your day will come. We will find freedom. ”

Perez came to the United States in 1999 and worked in a Delaware factory before moving to Springfield.

In 2009, he and Dora Perez got into a West Hartford Dunkin ‘Donuts while their children were in the car, he recalled in a 2018 Gazette interview. When they came out, police surrounded the car and he was arrested for leaving the child accused. Those charges were dropped, his attorney said in 2018, but he was on ICE’s radar.

“It is very difficult to live in this country without papers,” he told the Gazette in 2018.

The government granted him deportation visits during the Obama administration. “Obama was able to extend his deportation stays year after year,” he said on Saturday.

But during Perez’s first annual check-in after Donald Trump’s election, he was ordered to leave the country. “It got so difficult when the new president took office,” he said. He bought a plane ticket home, “but I thought that wasn’t the solution,” he said. “I didn’t want to be far from my family.”

Places like churches are viewed by ICE as “sensitive places” and are rarely arrested there.

As the labor center neared the church, “we didn’t know what it meant to provide shelter and we didn’t know how long it would take,” Kemper told the crowd. But they worked with the Pioneer Valley Workers Center and tons of volunteers, she said.

“We really didn’t know that day was coming,” Rev. Margaret Sawyer, co-director of the Pioneer Valley Workers Center, told the crowd. She remembered a time two years ago when Perez wrote to her, “I lost my case” – his appeal had failed. “I just didn’t know what to do,” Sawyer said. “We will continue. We will pray, ”she remembered Perez. “For me,” she said, “that’s the lesson here. We continue.”

After Perez and others spoke, people could ring the church bell to celebrate.

Perez’s family, including his four children, gathered in the church for the celebration. “My father can finally come home,” Tony Perez, the 18-year-old son of Lucio Perez, told the newspaper.

“It was hard. I pray to God nobody else will go through this,” Tony Perez said. “Nobody should ever be separated from their family.” He found support in the church that was helping his family, he said. He remembered that he attended church three times a week and that volunteers drove him and his siblings for 45 minutes each.

“Thank you all for never leaving our site,” Tony Perez told the crowd. “We love everyone here.”

Now Tony Perez is looking forward to spending time with his dad – going hiking and going to the park to play soccer and basketball. “We have a lot of catching up to do,” he said.

His father will also see him at Springfield Central High School this spring.

Dora Perez said she often wondered “when will this end,” she told the crowd. “It was God’s day today.”

During his three and a half years in church, Perez spent time praying, speaking to visitors, working in the kitchen, and teaching Spanish.

He tried to keep busy, but he often thought of his family. “It really wasn’t easy,” he said.

Perez said he was working with his lawyer on the next steps to secure his future in the US, given that deportation takes a year.

Greta Jochem can be reached at [email protected]

A coating from nature | Science Advances