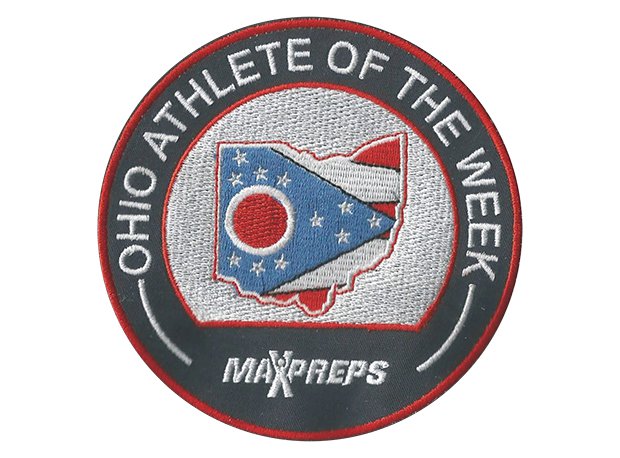 Who
had Ohio’s best individual performances? You vote, you
decide. MaxPreps is proud to again sponsor the Ohio Athlete of
the Week awards during the 2020-21 school year.

Each week during the season (regular and post),
there will be a fan-generated contest to tab
weekly winners. Each winner receives a letter and
award patch for their varsity jacket.

How does it
work?

Nominees are selected from
statistics submitted on MaxPreps. Coaches who do not have current access may
request their free account here.
Weekly finalists are released on MaxPreps every
Tuesday and voting is conducted in a special poll.
Voting ceases at noon on Mondays. The winners (2-3 per week) are
announced the next day along with the next week’s nominees.

Participants may vote as many
times as they want. It’s a competition. So
far this school year, over 10.9-million votes have been
cast, including 250,000 last week.

Sophomore
had 16 points, three rebounds, three assists and no turnovers in a
43-42 D-I state final win over Westerville Central. Had 11 points in a
63-49 semifinal win over
Mentor.

Here is the school year’s latest round of nominees…

* Jebadiah McGue, Ridgemont (Mount Victory) Baseball
Sophomore became the 10th player in state history to register at least 11 RBI in a game when he went 4-for-5 with a HR, three runs and 11 RBI in a 27-26 win over Vanlue.
* Briahna Bush, Cincinnati Christian (Fairfield) Softball
Senior captain and pitcher was dominant on the mound and at the plate in the Cougars first three games (all wins). Had 45 strikeouts and allowed one earned run in 17 innings, while going 10-for-10 with five homeruns, 22 RBI, a triple and nine runs.
* Ryan Favaro, Western Reserve Academy (Hudson) Boys Lacrosse
Junior attacker leads the state in goals (27) and points (35). Has scored at least three goals in every game (six) and had a season-high seven (and three assists) in a win over Worthington Kilbourne.
* Peyton Young, Western Brown (Mt. Orab) Softball
Senior second basemen went 4-for-4 with three HRs, a double and nine RBI in a win over Fairmont. That came a day after she went 3-for-3 with three HRs and seven RBI in a win over Goshen.

* Austin Sees, Brookfield Boys
Soccer
Senior goalie made 15 saves in a 2-1 win over
LaBrae and 14 saves in a 3-2 win over St. John (Ashtabula). Two of the
three goals he allowed were penalty kicks.

* Shaden Malone, Clay (Portsmouth) Boys
Soccer
Senior goalkeeper and striker played large
part in a 2-0-1 week. Had 16 saves in a 1-0 win over Glenwood and 12
saves in a 1-1 tie with South Webster. Also netted three goals and an
assist in a 5-3 win over
Belpre.* Jordan Briggs, Grand Valley (Orwell) Boys
Soccer
Sophomore had back-to-back hat tricks (six
goals total) in wins over Geneva and Pymatuning Valley. Added an assist
against PV for 13 points on the week.

Had 57, 48 and 27 assists,
respectively, in wins over Normandy, Brush and Laurel. Added 20 in a
loss to Riverside.*
Emily Baker, Troy Christian
Volleyball
Junior captain had over 20 kills (102
total) in four straight matches as the Eagles beat Newton, Legacy
Christian, Brookville and Ansonia.

* Xavier Puryear, Heath Football
Senior
running back scored six touchdowns and rushed for 68 yards on 16 carries
in a 56-20 win over Lakewood.

*
Eric Babinchak, Howland (Warren)
Football
Senior running back rushed for 290 yards and
four touchdowns on 39 carries in a 27-0 win over Buchtel.

*
Hannah Golden, Centerville
Volleyball
Junior setter had 45 and 41 assists in
wins over Northmont and Fairmont and 42 assists in a loss to
Springboro.* Bryce Schondelmyer and Brennen Troutwine, Arcanum Football
Tande
posted huge numbers in a 57-39 win over Dixie. Schondelmyer, a sophomore
quarterback, completed 21-of-31 passes for 425 yards and seven
touchdowns and also carried the ball 15 times for 75 yards and a
touchdown. Troutwine, a junior split end, had 10 receptions for 276
yards and four touchdowns.

*
Doug Rakes, Fairview (Sherwood)
Football
Senior quarterback threw for 304 yards and
two touchdowns and ran for 131 yards and three touchdowns in a 38-36 win
over Northwood. Has thrown for 37 touchdowns and rushed for 11 more
this season.

*
Braden Anderson, Worthington Christian
Football
Senior ran for 229 yards and five touchdowns
on 15 carries and had 12 tackles in a 52-14 win over Bishop
Rosecrans.* Caleigh Richards,
Maplewood (Cortland) Girls Cross
Country
Freshman won her seventh race of the season
and its was the big one. Ran 18:22.3 to finish first at the D-III state
meet.

Junior setter had 37 assists,
20 digs, six kills and four blocks in a 3-1 win over New Bremen in the
OHSAA D-IV state final. Had 32 assists, 13 digs, three kills and three
blocks in a 3-0 semifinal win over Dalton.

* Coley Sidloski, Strongsville Girls
Soccer
Junior forward had a goal and two assists in
the Mustangs 3-1 win over Olentangy in the OHSAA Division I state
final.

*
Conner Douglass, Elida Wrestling
Senior
was named Most Valuable Wrestler at the Allen County Tournament after
claiming the 138-pound title. It was his third Allen County championship
(2020-2018).

*
Chapman Faulkner, East Dayton Christian (Dayton) Boys
basketball
Senior dropped 30 points or more in each
game during the Eagles current four-game win streak, including 40 in a
victory over Temple Christian. Also had 53 rebounds, 16 assists and 15
steals in the four wins. Averaging 30.7 points per
game.* Michael Judge, Oak Harbor
Wrestling
Junior won the 113-pound title at Clyde’s
Dale Carroll Invitational by winning all four of his matches via pin
(0:20, 1:00, 1:08 and 0:15).

*
Bailee Smith, Maysville (Zanesville) Girls
Basketball
Senior reached 30 points or more for the
fourth and fifth time this season with 37 points in a win over River
View and 32 points, 10 rebounds and eight assists in a win over
Crooksville. Also had 21 points in a loss to New Lexington. Averaging
26.7 points, 6.1 rebounds, 3.8 steals and 3.6
assists.* Coleman
Hauck, Triad (North Lewisburg)
Wrestling
Senior won the 152-pound title at the Ada
Invitational with three tech falls (18-3, 16-0 and 20-4) and two pins
(2:21 and
0:33).*
Jenna Smith, Garfield (Garrettsville) Girls
Basketball
Junior had her seventh, eighth and ninth
doble-doubles of the season in wins over Lake Center Christian (30
points/13 rebounds and 26 points/14 rebounds) and a loss to McDonald (24
points/12 rebounds). Also had 26 points and nine rebounds in a win over
Youngstown Liberty.

Junior won the OHSAA Division I
bowling state title with a 740 series. She finished 118 pins ahead of
the
runner-up.

*
Joseph Kirby, St. Xavier (Cincinnati) Boys
Basketball
Senior
exploded for a career-high 29 points in an 81-65 D-I district final win
over Wayne. Was 7-of-8 from 3-point range and 8-of-8 at the free throw
line.

Senior
tandem helped the Knights win the OHSAA state title. Box had a hat
trick in a semifinal win over Walsh Jesuit, while Mack dished out four
assists. In a 2-1 win over St. Edward in the state final. Box assisted
on both goals, while Mack assisted on the
first.

* Taylor Strock, Napoleon Girls
Basketball
Senior
and Cedarville University recruit helped lead the Wildcats to the
program’s first D-II state title. Had 13 points and five assists in a
46-43 state semifinal win over Carroll and 23 points and seven rebounds
in a 76-44 state final win overt Vinton County. Hit 17-of-20 free throws
combined in the
games.

Matchbox Twenty is coming to Cincinnati in August