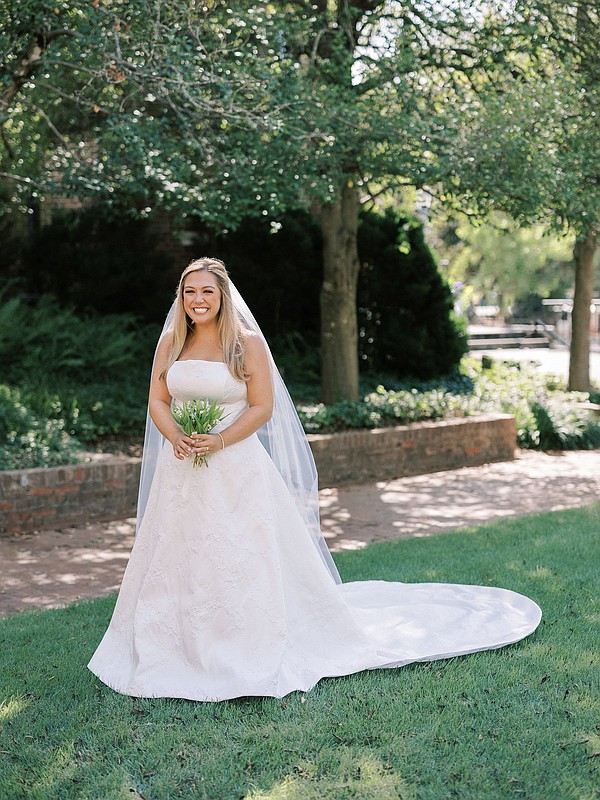 June and Jeffrey Thomas from Little Rock are the bride’s parents. She is the granddaughter of RH and the late Marion Morrow and Carol Anne and the late Mike Thomas.

The groom’s parents are Denise and Jeffrey Brian Dowden of Fayetteville. He is the grandson of Bobbie and Bill Cunningham, Barbara Hilburn, and the late Ben Dowden.

White wedding arrangements made from delphiniums, snapdragons, hydrangeas and tulips adorned the altar. The music was played by the organist Colin MacKnight.

The bride, accompanied by her father, wore a strapless A-line dress made of silk brocade and a bouquet of lilies of the valley.

The flower girl and ring bearer were Parker Marie Kees and Ford Michael Thomas, both of Little Rock.

After the ceremony, a reception was held at the bride’s family home. Guest tables covered with French blue cloths had brightly colored flower arrangements. Music was from Motown.

The bride is a graduate of the University of Arkansas, Fayetteville, with a bachelor’s degree in English literature and art history. She is the Grant Manager at the Arkansas Blue Cross and Blue Shield Blue & You Foundation.

The groom is a graduate of the University of Mississippi with a bachelor’s degree in integrated marketing communications. He graduated with a Masters of Laws in Agricultural Law and Policy from the University of Arkansas School of Law and is an attorney in the Office of Chief Counsel of the Arkansas Department of Energy and the Environment.

After a honeymoon in Punta Maroma, Mexico, the couple will live in Little Rock.

Kentucky GOP lawmakers are taking the lead in fighting COVID