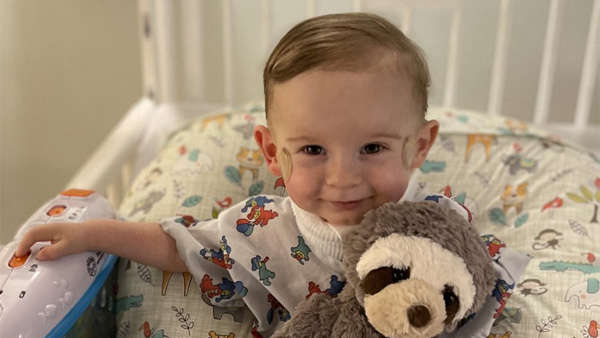 The Cincinnati Zoo announced on the day of Oliver’s visit that his sloth was pregnant. He slept with a sloth plush until the day went by.

But for Oliver, he was born with one hand, three fingers total, a pig bronchus, a right aortic arch heart, a kidney, narrow airways, and an inability to swallow.

The medical term is VACTERL, which happens to affect one in 10,000 to 40,000 newborns. It is not genetic and has no known cause.

Oliver had an operation on January 11th of this year to connect his esophagus to his stomach. He passed away six weeks later from a very rare complication related to the surgery.

His mother, Alyssa, tells Eagle Country 99.3 that Oliver received a sloth plush during that operation and slept with the sloth until he died in February.

On the night of Oliver’s visit, the Nicholsons learned that the sloth at the Cincinnati Zoo was pregnant. The family later learned that Lightning was a two-toed sloth that resembled Oliver’s hand with only two fingers – which made the family pause for thought.

Now a petition to name the baby sloth after Oliver has almost reached its goal of 35,000 signatures.

The Nicholson’s goal is to honor Oliver’s memory while raising awareness of VACTERL.

“Oliver made and reached so many people in his short life. He went through many operations with a smile over and over again. He would greet his surgeons with a smile and wave to them. He overcame all the things that were thrown in his way and never knew for a second that he was different. To me, getting my petition notifications means more than just letting my beautiful boy live, it also spreads this condition to as many people as possible. I do this for Oliver as well as for anyone with this disease, ”said Alyssa.

For more information on Oliver’s VACTERL story and how to sign the petition, please visit https://www.change.org/Fightlikeoli.

Which college football team has the happiest fans in the country? Cincinnati Bearcats, this is who