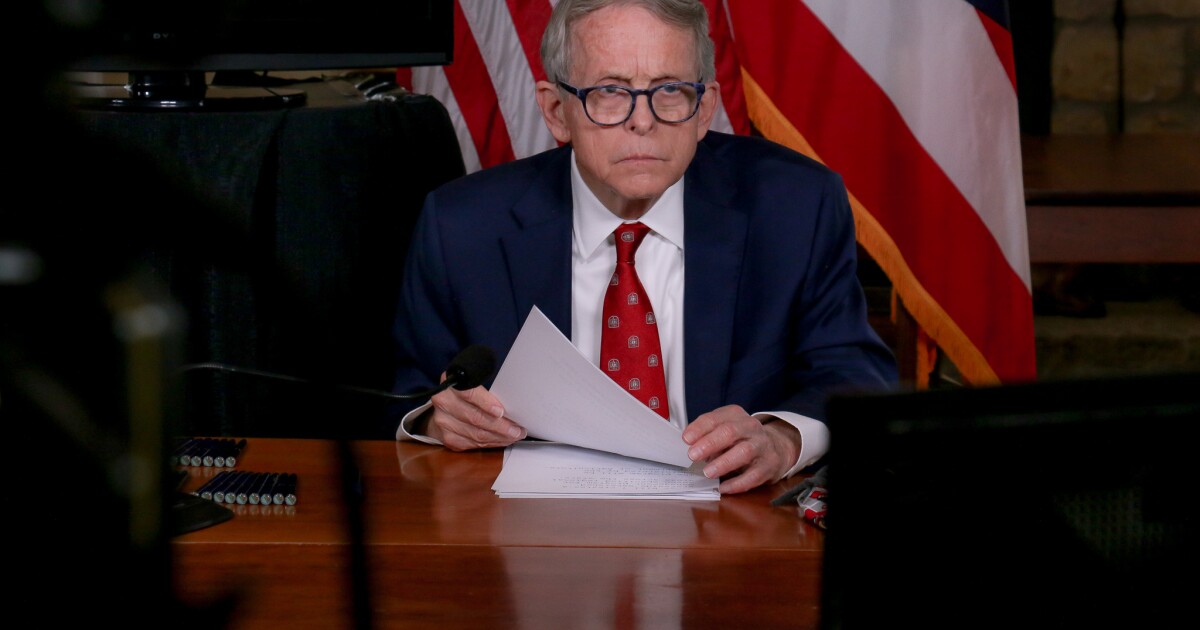 Governor Mike DeWine gave his most confident signal to date that the end of the pandemic is near, declaring Thursday that he will lift all public health COVID-19 orders “if Ohio has 50 cases per 100,000 people for two weeks sinks”.

DeWine set the standard in a nationwide address on Thursday, his third prime-time speech since the COVID-19 pandemic began a year ago. The governor said Ohio is currently reporting 179 new coronavirus cases per 100,000 people, a rate that has fallen sharply from 731 cases in early December when the state first began vaccinating residents.

Although DeWine said Ohio was “now on the offensive with this virus,” residents likely won’t see restrictions go away anytime soon. As of Wednesday, only one county – Holmes County in the Amish country northeast of Columbus – is below the 50 threshold.

“The end of our fight is now in sight, but we have to keep pushing these last few days,” said DeWine. “We want all Ohioans to serve this important mission together.”

While some Republicans point to Texas and Mississippi, which lifted their mask mandates and business capacity limits this week, Ohio isn’t about to drop the July requirement for face masks in public places.

DeWine called it a “battle-worn tool” and reiterated how effective face masks were in preventing the spread of disease in schools, even when children are less than three feet apart and in the same room for long periods of time.

Ohio recently eased some of its restrictions by reopening sports and entertainment venues with 25% indoor and 30% outdoor capacity and allowing banquet halls to resume hosting larger events. DeWine said he was looking forward to a spring of proms and weddings and a summer of festivals, fairs, and baseball.

Meanwhile, the state ban on “mass gatherings” over 10 people – a restriction first introduced in March last year – remains in place.

DeWine commended the Ohioans for the sacrifices they made in the past year to fight the virus.

“Our communities have come together,” DeWine said. “We did things the Ohio way. We were careful. And we took care of it.”

A total of around 17,000 Ohioans have died of COVID-19 to date. However, the total number of deaths was not updated a few days after the health department changed the reporting system.

“We have to fight to the end”

DeWine’s address came almost a year before the day of his first major pandemic-related action. On March 3, 2020, DeWine, together with Mayor Andrew Ginther and then Director of the Department of Health, Amy Acton, set strict entry restrictions for the annual Arnold Sports Festival in Columbus and canceled the popular Fitness Expo.

The decision to curtail the huge sports festival, which typically hosts 20,000 athletes from 80 countries and thousands of spectators, was made before Ohio reported a single case of COVID-19, but it turned out to be a harbinger of what was to come.

Nine days later, DeWine ordered schools to be closed for three weeks, which ultimately resulted in face-to-face learning in many districts ending for almost a year.

“Neither of us then fully understood the upcoming fight,” DeWine said last March. “That was a tough year.”

Last Monday, March 1, was the state deadline for school districts to resume, at least partially, face-to-face learning in exchange for staff and teachers receiving the COVID-19 vaccine. DeWine said the effort has proven successful.

“We vaccinated over 200,000 educators in just four weeks in February,” DeWine said. “And today almost 95% of our children are personally back in school and learning. We had a plan and we carried it out.”

In the second phase of the vaccine rollout, Ohio hospital stays and other metrics have dropped to their lowest level in half a year. The Ohio Department of Health reported 1,875 new cases, as well as 82 hospital admissions and seven intensive care admissions, last day.

DeWine said that coronavirus cases, particularly in nursing homes, have decreased by 90% since December – from over 2,800 cases per week to 268. Nursing homes, which have seen the majority of COVID-19 deaths in Ohio, have had vaccinations top priority .

Even if vaccine supplies increase, DeWine warns that the virus will continue to turn into a more contagious disease and that the next few months will remain unpredictable. And, as he has done in all of his prime-time addresses, the governor urged residents not to give up on precautionary measures just yet.

“We’re all so sick of this virus,” admitted DeWine. “But you know we have to resist this urge and fight to the end.”

Full first round projection for all 32 picks