Governor Mike DeWine is lifting restrictions on most of Ohio’s mass gatherings: The Wake Up for Tuesday, April 6, 2021 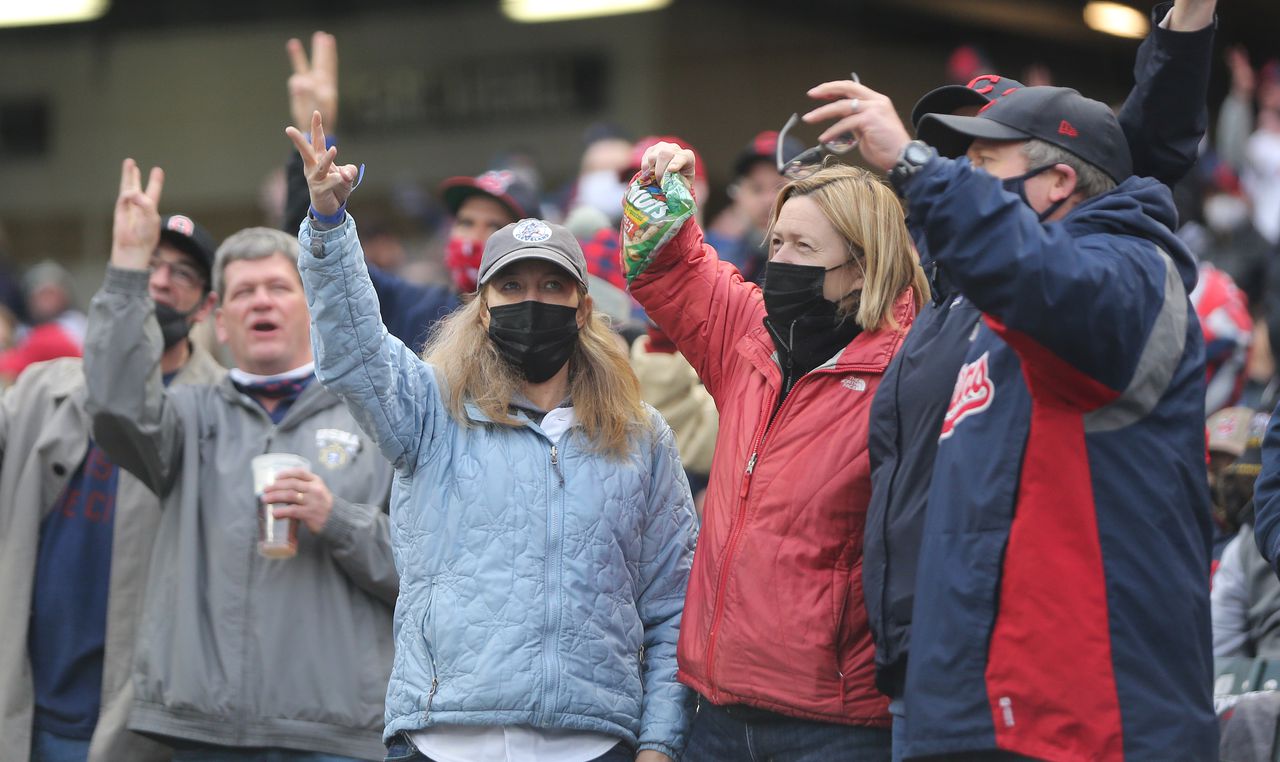 Subscribe to Wake Up, cleveland.com’s free morning newsletter, delivered to your inbox at 5:30 am on weekdays

The highs are reached today in the mid-1970s with mostly sunny skies. The winds will be calm. Clouds move in overnight as temperatures drop into the upper 50s. Continue reading.

Mass gatherings: Governor Mike DeWine’s administration lifted almost all of the remaining bans on Monday’s mass gatherings – including festivals, parades, proms, promotions, and fairs – as long as appropriate coronavirus health precautions are followed. Jeremy Pelzer reports that changes will remove entry restrictions for outdoor sports stadiums and entertainment venues in Ohio, among other things, although capacity restrictions for indoor venues remain in place.

Armond Budish: Cuyahoga County Executive Armond Budish’s government has been accused of not seeking government reimbursements for maintaining his public defender’s office in more than a year. Courtney Astolfi reports the potential loss to taxpayers could be $ 1.2 million. The administration reported in an email to cleveland.com and The Plain Dealer that all refunds fall in the fiscal year July 1 through June 30 in Ohio, meaning there is no late penalty and the hope for a full refund exists on the basis of the allowable cost.

This week at CLE: Former director of the embryology laboratory at the University Hospitals Ahuja Medical Center has blamed administrators and staff for the malfunction that caused 4,000 embryos and eggs to become non-viable in 2018, according to CLE, the daily half-hour news podcast from cleveland.com.

Reallocation: Proponents of voting rights say Ohio doesn’t have to wait for the late US census results to start the state’s process of creating new political maps. Andrew Tobias reports that in a letter to Governor Mike DeWine, heads of state and other officials involved in redistribution, as well as groups such as Common Cause Ohio and the League of Women Voters, some work can now be done, including selecting the state the legislature will be in sit on the state commission, which is likely to approve the policy cards, and set up a website where the public can learn more about the process and make suggestions.

New Numbers: The Ohio Department of Health reported 2,918 new coronavirus cases on Monday, including Sunday and Monday numbers since no data was reported at Easter, reports Laura Hancock.

Abortion Act: A Hamilton County judge on Monday suspended enforcement of a law requiring fetal remains to be buried or cremated after a surgical abortion. Hamilton County Common Pleas Judge Alison Hatheway’s order prevents the law, which came into effect today, from going into effect until 30 days after the Ohio Department of Health has written rules that initially require public input and comment. Laura Hancock reports.

Almost 40% of Ohioans ages 16 and over have been vaccinated. Younger children were not eligible for vaccinations.Rich Exner, cleveland.com

Vaccinations for Students: Governor Mike DeWine said Monday that Ohio health departments and vaccine providers should reach out to schools about making plans to offer the coronavirus vaccine to 16- or 17-year-olds. Emily Bamforth reports that the state plans to vaccinate the age group before the summer break. The Pfizer vaccine is the only one approved for the age group, and students need a permit to get the vaccine.

Aetna: The Ohio Department of Medicaid has selected Aetna Better Health to manage the care of children with complex behavioral health needs in a new program called OhioRISE. Laura Hancock reports that when fully implemented, Aetna will receive $ 900 million per year from a combination of state and federal funds to manage the care of approximately 60,000 children in OhioRISE.

COVID-19 Symptoms: A study from the University of Southern California found that COVID-19 symptoms often begin in a specific order, starting with a fever. Julie Washington reports in a coronavirus update about the different order of symptoms with the coronavirus and the flu.

Jim Jordan: U.S. Representative Jim Jordan’s re-election campaign filed on Sunday with the Federal Election Commission to answer questions about the huge accounting discrepancies between the reports filed several years ago and the committee’s corrected reports earlier this year. Sabrina Eaton reports that Jordanian treasurer Thomas Datwyler attributed many of the contribution differences to how the campaign initially handled the online contributions it received towards the end of the periods covered in each campaign financial report.

Nina Turner: Congressional candidate Nina Turner has raised $ 2.2 million to date to take over the Cleveland and Akron seat vacated by President Joe Biden’s election of Marcia Fudge as Secretary of Housing and Urban Development. Sabrina Eaton reports that the money raised will likely give Turner a fundraising advantage among the more than half a dozen candidates seeking seats in the August 3 and November 2 primaries.

Danny O’Connor: Franklin County Recorder Danny O’Connor is running for Congress, but did not specify which district in Monday’s announcement. Andrew Tobias reports that Columbus Democrat O’Connor said he was considering running for the U.S. Senate in 2022 and that he was also rumored to be a possible post office candidate. O’Connor made it clear in an interview that he has no intention of challenging Columbus Democratic representative Joyce Beatty. 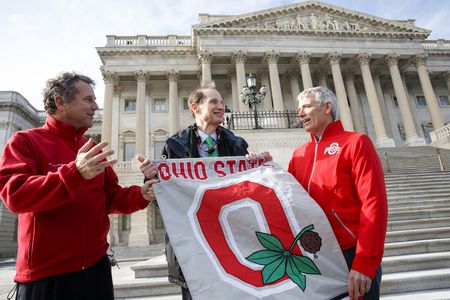 Rob Portman, GOP Senator from Ohio, disagrees with his Democratic counterparts on the Senate Finance Committee, Sherrod Brown of Ohio and Ron Wyden of Oregon, that tax reforms should be overturned in 2017. (J. Scott Applewhite, Associated Press file photo)AP

Corporate Taxes: Ohio Senator Sherrod Brown claimed Monday that a Republican overhaul of tax law will reward companies who move jobs overseas and, along with two colleagues on the Senate Finance Committee, proposed a bill that they believe will encourage domestic investment and make sure Sabrina Eaton reports that mega-corporations pay their fair share of taxes.

Tax Sharing: Cleveland City Council approved an agreement negotiated with Warrensville Heights to share new taxes on a development that would span the border between the two cities. Robert Higgs reports that Cleveland would collect 54% of the new income taxes generated by a 100,000-square-foot expansion from Tremco, a manufacturer of building products. The legislation has yet to be signed by Mayor Frank Jackson, which is expected while Warrensville Heights has already approved the deal.

Fire stations: City council approved up to $ 830,000 on Monday to convert the Cleveland fire stations to accommodate female firefighters, Robert Higgs reports. The upgrades, which are expected to take place by 2025, would include separate bedrooms, sanitary facilities, and showers.

Intro, a new wooden building, will be erected near the West Side Market on March 30, 2021

Intro Apartments: The developers of Intro, a $ 145 million apartment building coming to Ohio City, will shortly receive the title of America’s tallest solid wood building – a structure of adhesive-laminated columns and beams and cross-laminated floor panels. Steven Litt reports that, with 298 apartments and 35,000 square feet of retail space and street-level amenities, Intro will have nine floors, eight of which are structured from wood.

Station Road Bridge: The 140-year-old Station Road Bridge, which spans the Cuyahoga River, reopened Monday in Cuyahoga Valley National Park after a four-month renovation worth $ 1.3 million, reports Robin Goist. The bridge spans the river in Brecksville and provides visitors with access to the Ohio & Erie Canal Towpath Trail from the Station Road Trailhead.

Easter shooting: A man from Lorain was charged with murder in a fatal shooting at Easter, police said. Olivia Mitchell reports that police say Steve Coleff, 35, admitted to shooting 39-year-old Jose Marrero before officers arrested him on Meadow Farm Road near Buck Horn Boulevard on Sunday.

Eric Andre: Eric Andre, star of the Netflix comedy “Bad Trip,” guides viewers through everything he did on cleveland.com’s sister site Vanity Fair during his time.

Mixology Course: Stonewater will host Springtime Slippers to kick off its Mixology series. The first class costs $ 80. Marc Bona reports that Tinnie Hascher, of Watershed Distillery in Columbus, will host the event, which starts with an introduction to bar tools and key skills, and shares tips on making seasonal cocktails like a pro.

The driver dies after crashing home on the East Side of Cleveland. Read more

The online petition campaign in support of Shaker Square amid foreclosure is approaching 1,000 signatures. Read more

The University of Cincinnati football season begins without fans

Revenues at the Ohio Casino decrease with reduced operating times