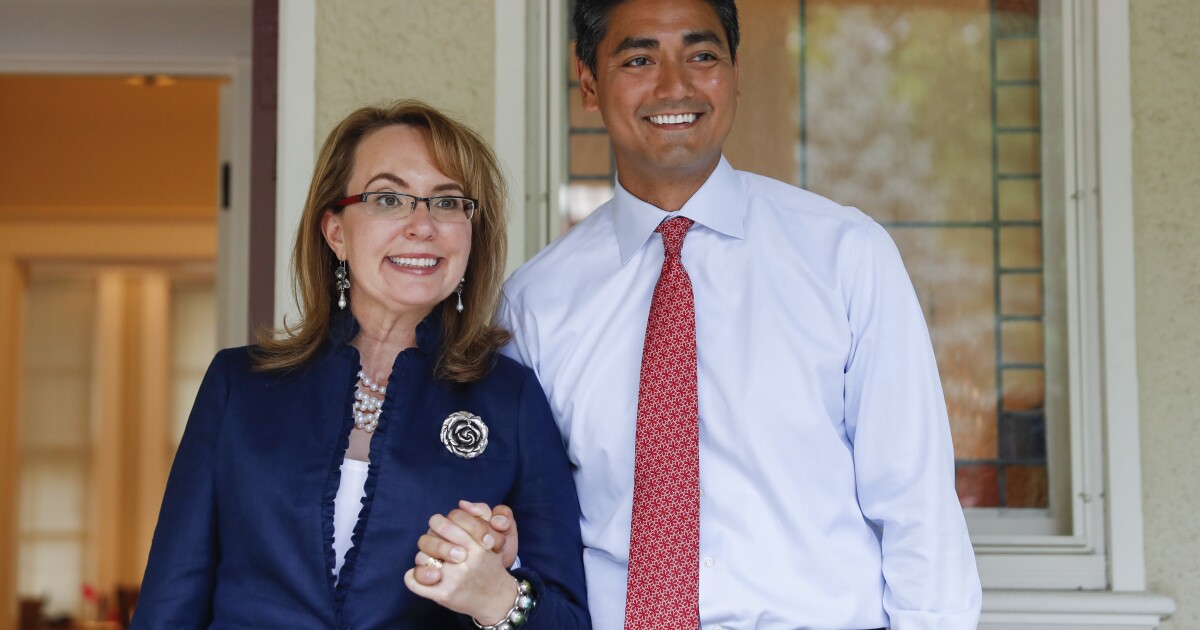 Democratic congressional candidate Aftab Pureval, along with former US Representative Gabrielle Giffords, stood in front of about 125 supporters in a house in Cincinnati on Wednesday to set up a “Women for Aftab” organization.

And because the event was attended by Giffords, the former Arizona Congressman who was shot and seriously wounded in a City Hall-type event in January 2011 – a mass shooting that killed six people – the gathering also became a rally against gun violence.

The founding of Women For Aftab targets naturally the largest constituency in Ohio’s 1st Congressional District. The district is seen as pivotal in the 2018 Democratic effort to take over the U.S. House as Pureval seeks to get longtime Republican U.S. Representative Steve Chabot off the field.

Giffords is still suffering greatly from her wounds. She has difficulty speaking, walking, and her eyesight is impaired.

But she was standing on Beth Wayne’s porch, slowly and deliberately doing two things: supporting Pureval in his campaign, and calling on all who support him to support her crusade to end gun violence.

“These are scary times we live in,” said Giffords, referring to the many mass shootings since she was wounded seven years ago. “We have to do something to stop gun violence. Do you have the courage to fight? Then stand by me.” ! And vote! Vote! Vote! Connect your voices with mine. “

Before the rally began, Giffords met privately with many guests in the house. Among them were Abbie Youkilis and Ethel Guttenberg, the aunt and grandmother of 14-year-old Jaime Guttenberg from Cincinnati, who were shot dead on February 14 in the mass murder at Parkland High School in Florida.

Giffords had to leave to catch a plane after her brief speech, but then Pureval took the microphone on the porch and began a passionate talk about what his organization Women For Aftab would stand for.

“You know, after the last (presidential campaign) I was angry and frustrated with the direction our country was headed,” said Pureval, Hope for the future.

Pureval, now a Hamilton County clerk, made three promises to the crowd:

“I will fight to end the abuse and violence against women,” said Purevall.
Ahead of the rally, Pureval’s campaign released a memo claiming Chabot had a bad record on women’s issues – including against the Affordable Care and Equal Pay Act for women.

Chabot campaign spokesman Cody Rizzuto said in a written statement that the memo is “just another desperate attempt by Aftab Pureval to falsify Congressman Chabot’s record.”

“Let’s look at Aftab’s file,” Rizzuto said. “I find it hypocritical that Aftab announced its support for women when he personally fired seven women when he took over the clerk’s office.”

It’s been a while since the Ohio 1st District had a really competitive race. The Republicans in the Ohio General Assembly made sure of this after the 2010 US census by redrawing the district and giving a gift to Chabot – the GOP promised land known as Warren County.

The last Democrat to represent the 1st District came before the district boundaries were redesigned in 2008, when then-MP Steve Driehaus rode the Obama wave to kick Chabot out of the house for the first time in 16 years.

But it didn’t take long. Two years later, Chabot came back and defeated the Democrat. The Westwood Republican has held the seat since then.

Pureval – who appeared out of nowhere in 2016 to run a clever and well-funded campaign – did something no one in Hamilton County politics thought possible: he defeated a Winkler. In this case, Tracy Winkler, the Republican clerk.

Pureval took office in January 2017. Since then, he has fired a number of highly paid administrators who had political ties to the GOP. brought office technology into the 21st century; gave its employees a minimum wage of $ 16 an hour; Introduction of paid family leave and LGBTQ protection; and came in about $ 1 million under budget.

Republicans have criticized 35-year-old Pureval, the son of an Indian father and a Tibetan mother, for willingness to quit the job he was elected to in 2016 for a shot at Congress.