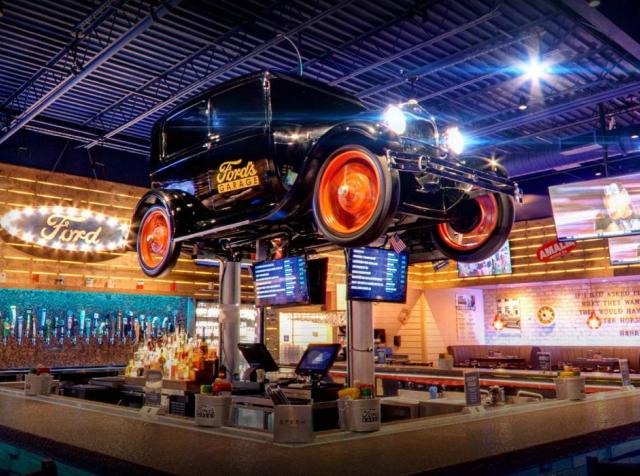 Ford Motor Company has quite a rich history as one of America’s most important manufacturing companies. That story also translates into a pretty cool dining experience, as it turns out, as evidenced by Ford’s Garage in its growing number of restaurants across the country.

The original Ford’s Garage opened in Fort Myers, Florida in 2012, less than a mile from Henry Ford’s winter home. In the following years, the up-and-coming burger and craft beer franchise has expanded to a total of 16 locations, including 14 in Florida and one each in Indiana and Michigan.

Most recently, Ford’s Garage announced that it would add at least 15 new restaurants nationwide by the end of next year. Development contracts have already been signed for eleven of these restaurants in Florida, Kentucky, Michigan, New York, Ohio and Texas.

Looking beyond 2022, the company plans to open 10-15 new locations annually.

“That’s where we start,” says Brand President Steve Shlemon. “We are proud of how far we have come and we are excited to see where we are going. With our many Ford-inspired design elements and first-class service, Ford’s Garage promises to inspire other locations across the country. “

It all started when four entrepreneurs teamed up to set up the first non-automaker Ford’s garage in Fort Myers, Florida in 2012. When the concept caught the automaker’s attention in 2014, the restaurant group took the opportunity to build the brand together and signed a license agreement in 2016. Today, Ford’s Garage is the first and only restaurant to have rights to Ford’s iconic blue-oval logo and other branding images of the automotive giant, including archived historical photos, images of vehicles and current Model Ts.

Such items have become standard decor in Ford’s garage. Each restaurant is designed to look like a 1920s gas station and is filled with old Ford vehicles, fixtures, and gas pumps. Servers wear blue mechanic shirts. Blue shop towels also serve as serviettes. Even the bars in the restaurants are decidedly old-fashioned, mixing forbidden-style elements like brick, gaudy wood, and a hand-hammered copper bar top. Many more unique features that are too numerous to list really make Ford’s Garage a fun place to visit and take photos.

“Every aspect is branded,” says Shlemon. “Everyone is having a lot of fun.”

Aside from all of the nostalgia, however, Ford’s Garage is also a good old-fashioned burger and beer place. Burgers are the main attraction, with the best meats (and a vegetarian option) paired with all-natural matured cheese, fresh toppings, and gourmet sauces on artesian rolls with the Ford logo. The restaurants also specialize in popular American home cooking like homemade meatloaf, chicken wings and tender, onion rings, and famous macaroni and cheese. Lighter dishes such as fresh salads, grilled chicken, and fresh fish are also available.

Additionally, Ford’s Garage’s beer list is carefully compiled of 150 different beers (40 on tap), with a heavy influence of American craft beers from across the country. The restaurants also serve wine and cocktails, as well as non-alcoholic meals.

“Ford’s Garage has proven to be a turnkey business that will become a popular dining address in any neighborhood,” notes Shlemon Automotive History. “

Most of Ford’s Garage future locations will be approximately 8,900 square feet, have about 250 seats, and employ between 95 and 115 people.