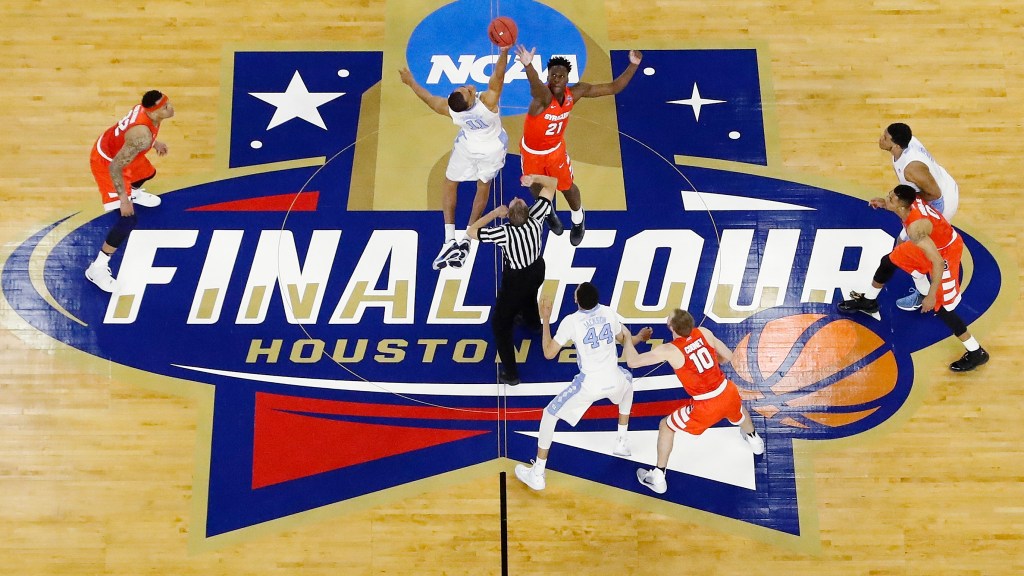 I’m not afraid to tell you that I love One Shining Moment a little too much. Maybe you already knew that.

Is the song and montage a bit cheesy? Sure, but there are many other sports traditions that could be described in this way. There’s just something about the way it sums up the weeks of the NCAA tournament, filled with emotion, roller coaster rides, and David / Goliath storylines that will leave you with the perfect, satisfying final taste of one of the greatest sporting events.

Here at FTW we love to rate things, so I’ve been ranking every single one shining moment since it started when the tournament ended in 1987. My criteria? The production itself, the use of highlights and music, and whether or not it felt that overall exciting. (UPDATE: We have rated the 2021 version).

So the ball tipped and here we are:

The highlights aren’t the problem. It’s all of these televisions. To. Lots. TV. Not to mention a heavy dose of special effects. I like my OSM to be simple and unadulterated.

Something about this doesn’t do anything to me. Even audio from Gus Johnson didn’t increase my heart rate significantly.

This was back in the early days of the highlight role, so I’ll bet the producers were still learning what worked. Too many bank shots, too few game highlights. It was fun getting Larry Brown to pump.

Good news: A new, improved version of the song by writer David Barrett. Bad news: a few too many slow motion shots and special effects – lots of glowing basketballs – for my liking.

Just a few too many reaction shots.

Aside from Wisconsin players “riding” and President Obama’s cameo, I didn’t love this game. Maybe it was just a tournament like that?

I’m not sure what it is, but this one was just okay. Lots of young Blake Griffin.

I enjoyed seeing Bobby Knight messing around with someone (I think that’s the late Don Haskins?) At 12:18 a.m.

Christian Laettner’s shot is in there and I think that’s Travis Best taking a hit on “You always did your best”.

Solid, but not the greatest.

Lots of tears. That’s not a bad thing. Also: A Rasheed Wallace close to the fight.

Okay, let’s talk about Jennifer Hudson’s much more pivoting version. Here’s a hot take: It’s actually not that bad. Purists (including myself) can argue it’s Luther Vandross or Bust, but their performance gave me a few goosebumps moments. Gordon Heyward’s mid-way miss was handled wonderfully.

I think this is the first time we’ve seen cameras in the locker room. Pretty cool.

Points for the inclusion of Al McGuire who dances to “The ‘Cuse is in the house”.

I like the choice of starting with the championship trophy with Shane Battier and then working backwards. Still a little heavy on the computer effects.

The opening shots of quirky fans, mascots, and bands are well worth the price of admission.

Bo Kimble’s free throw for left-handers in honor of Hank Gathers for the lyric “You reach deep inside” is perfect.

Some great things: a solid intro, a fantastic little montage of water on the carriage, and Julia Louis-Dreyfuss cheering Northwestern on. I would have preferred more audio from the booth during the guitar solo and less during the verse, but overall it’s fine – even if the editors couldn’t do much with a sloppy championship game.

As you know from this list, I like booth audio mixed with highlights, but I’d say there was a little too much of it. One of the best things is just to hear Luther ring the bell. Still, I love the intro with its dunk and Michigan scream and the use of the extremely large Tacko case for the lyric “Time is short”. Somehow, Chuma Okeke’s injury and Bruce Pearl’s reaction worked too.

If I’m not mistaken, this is the first time we’ve heard audio from the cabin we are using, a simple but great innovation that enriches the experience. And look! There is Nick Lachey! Ashley Judd! Bill Murray!

I keep going back and forth with this version. On the one hand, I enjoyed the voice-over speeches from some trainers in the locker room at the beginning. On the other hand, there is a lot of action in the square and fewer clips from scenes of it (I liked the quick assembly in a locker room). But so many incredible recordings were made in 2016, including Kris Jenkins’, that sticking to a highlight package was the right call. This belongs in the top 10. BONUS: This appears to be Ne-Yo’s alternative version with a Villanova-centered roll (hat tip to Crossing Broad):

Both the 2014 and 2015 editions reflect the era we are in – lots of viral moments (Ron and RJ Hunter of Georgia State, the Mercer dance) that come with the action on the square. Fantastic. I couldn’t decide which was better.

I’ve seen every One Shining Moment in chronological order so it was a pleasure to hear the silky voice of Teddy Pendergrass greet me (absolutely no insult to Barrett, but who doesn’t love Pendergrass?). The series of hands that say “No. 1 ”during the opening was pretty cool too.

I loved this one! The opening montage got me straight to the point: slow motion, audio from locker room speeches and radio clips, the meta moment of the UMBC player wanting to star in the One Shining Moment video, followed by highlights interrupted by Turner’s voice and CBS Announcer. Well done all round.

Maybe it was the star power of the ’08 tournament itself (Steph Curry, Derrick Rose, Kevin Love) or the Big Shots (Mario Chalmers to the rescue for Kansas!) Or even the use of pre-game huddle audio that did this Tournament makes a top 5 candidate.

Maybe it’s because we’ve waited so long for it. Or maybe it’s the way producers handled the intro – with no cheerleaders and bands there was a great montage of drone footage of the arenas around Indianapolis where this tournament was played along with some solid dancing / partying- Crowd shots. But there are so many reasons this is a top 5 OSM: a near perfect balance of highlights, calls from the cubicles and room to breathe the song, a nod to retired Roy Williams, and the use of a nice slow motion .

The very first OSM is not a tenth of today’s production values, but it offers a certain power punch with its simplicity. There’s a great montage of angry coaches about the guitar solo and the first glimpses of familiar visual matches with the lyrics (“Feel the beat of your heart / feel the wind in your face”). It is crowned by Keith Smart’s all-time great shot. It’s hard to get it right the first time, but this one did it.

A shining moment is all about the highest high and the lowest low. You have George Mason partying and Adam Morrison sobbing. You have lots and lots of Joakim Noah and a perfect crane shot of the Florida fans leading forward in a Gator Chomp. This one feels like a great symphony.

It’s not just because this is Vandross’ first appearance. It feels like OSM has made its move here. No frills, just a solid mix of highlights, excitement and emotions.

This here has it all: Luther, the perfect opening montage with audio / video from the crowd and cinematic moments, mixed with exciting highlights. There’s even Jim Larranaga’s “Muhammad Ali!” Locker room speech to Miami players. If you put a One Shining Moment in a time capsule, this is the one.