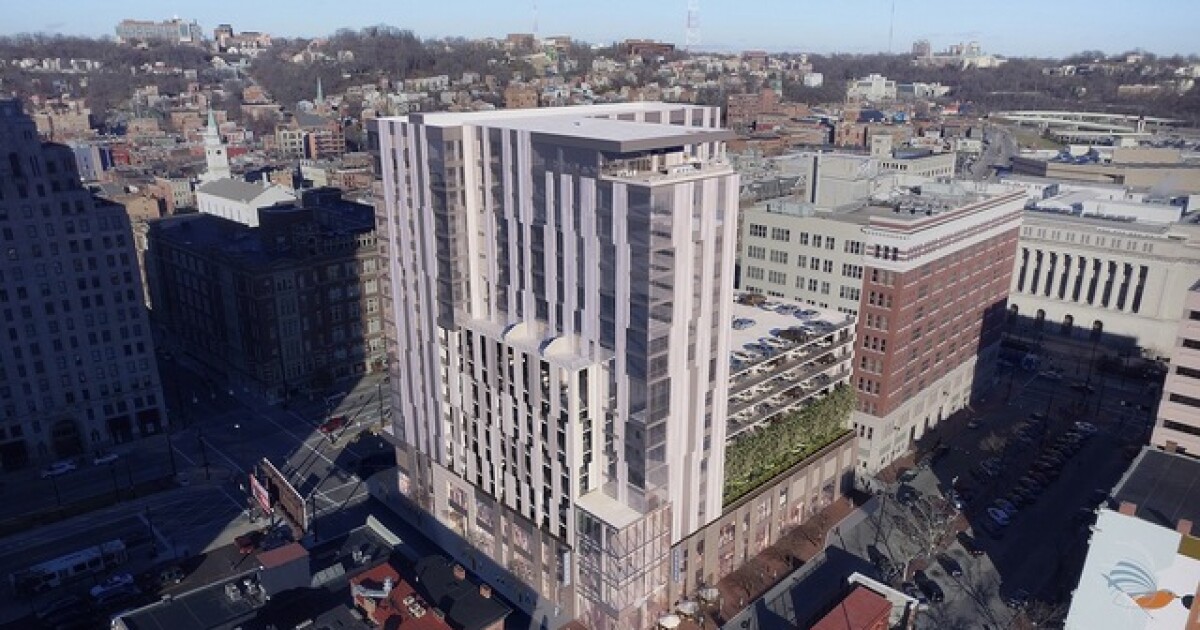 CINCINNATI – Kroger Co. has selected a four-acre parking lot one block east of their corporate headquarters as the location for their long-planned downtown grocery store. It will be part of a $ 90.5 million development that also includes 139 luxury apartments and a 550-car garage.

The 18-story building will include a 45,000-square-foot grocery store with a front door on the corner of Court and Walnut Streets. A second-floor bar and dining room offer outdoor seating on a deck overlooking Central Parkway. The Food Hall concept is a regional first for Kroger and features an ever-changing mix of local restaurants and grocery vendors to cater to the food needs of downtown workers and residents.

“Cincinnati has been Kroger’s home since 1883. We love the city,” said Rodney McMullen, Kroger CEO. “It’s exciting to see all the progress that our great city is making and to be part of that progress and support the city.”

3CDC said the project is an opportunity to connect the rapidly developing blocks around Washington Park with the hundreds of new housing units now being built or planned in the southern half of the central business district. The store is expected to attract buyers from the mountain. Adams, Downtown, Over-the-Rhine and the West End are increasing tram and pedestrian traffic.

“We talked a long time about finding the right opportunity,” said Adam Gelter, 3CDC’s executive vice president of development. “This is not just a stand-alone grocery store, but an opportunity to influence the entire region.”

A representation of what the main entrance to downtown Kroger will look like on Court and Walnut Streets. Provided by GBBN Architects.

The Cincinnati City Council will be asked later this month to approve a $ 8.5 million city grant for the project. In August, the council will consider a tax hike funding plan that will divert approximately $ 400,000 in annual property taxes to cover parking costs for Kroger customers.

As part of the plan, the city would put in place a special tax mechanism called project-based tax increase finance (TIF). This allows a property owner to make payments in lieu of taxes that can be used to offset project-related costs. Kroger would deposit approximately $ 12 million into the TIF over a 30-year period. These proceeds would then be used to reserve two of the garage’s eight floors and provide 140 spaces for Kroger customers to park for free while shopping.

Residential developers – a partnership between North American Properties, Rookwood Properties, and NorthPointe Group – would also receive a project-based TIF, but these details have yet to be finalized. The garage and tower block are expected to cost $ 69 million together, with the city grant covering $ 8.5 million and developers bringing in up to $ 8 million in equity. Bank loans, a government loan, and a loan from 3CDC’s corporate-backed revolving loan funds will cover the remaining costs. The eight-story tower will fetch rents of up to $ 3,000 per month for its largest 1,400-square-foot units. The units start on the 11th floor of the new Kroger building on Walnut Street and Court Street in downtown. Provided by GBBN Architects.

NorthPointe partner Rick Kimbler said the new Kroger store and Cincinnati tram will be marketed as amenities for the project. He anticipates it will attract young professionals and empty nests who live close to work and want to be close to the excitement and energy of Over-the-Rhine.

“That imaginary line that separates the central business district from OTR is disappearing,” said Kimbler. “We think that’s a plus.”

Residents have access to one garage space per unit, but have to pay market prices for these spaces. The city-owned garage is controlled by 3CDC under a master lease similar to the garages in Fountain Square and Washington Park.

Kroger will invest around $ 19 million in the new downtown store. An additional $ 2.5 million in construction costs will be covered by new market tax credits. This is a federal program that allows investors to buy tax credits from the U.S. Treasury Department. The proceeds will be used as equity contributions for private developments in low-income census areas.

With the location not in a low-income census area, Kroger chose to meet the tax credit requirements by committing to recruiting low-income residents to fill at least 60 percent of the 160 jobs required to operate the Business are required.

Kroger plans to close its business across the Rhine at 1420 Vine Street and transfer its 60 employees to Court and Walnut. It will donate the Vine Street Store to 3CDC so that the site can be redeveloped. A representation of the view from Central Parkway and Walnut Streets. Provided by GBBN Architects.

The project is a confirmation of the rebirth of Downtown as a residential neighborhood. 17,717 people now live in the 45202 area code and more than $ 300 million for new housing projects now planned or under construction. By the time the store opens in 2019, Kroger is expected to move from more than 21,000 households between the Ohio River and Findlay Market.

Last June, Oscar Bedolla, director of economic development for Cincinnati, told WCPO that grocers would be reluctant to invest in downtown until the population climbed to over 20,000. Kroger’s CEO was encouraged by the expectation of continued residential growth in the urban core, not just the number of employees in the city center.

“There wasn’t a specific magic number,” said McMullen. But of course, “when you start reaching 20,000 it’s a lot easier to have enough stores that work.”

The site will have “a good symbiotic relationship” with the Cincinnati Bell Connector, Gelter said. “Hopefully it will improve driver traffic, but it will also help shoppers get into business more easily.”

The L-shaped site has five tram stops within three blocks, making it an easy grocery store for residents of The Banks and those who live near Findlay Market. But McMullen said proximity to the tram wasn’t a driving force in choosing the location.

“It’s a very convenient place for over-the-Rhine and downtown residents as well as the people who work,” said McMullen. “And it’s on the tram. So it’s all of these things put together that make the site exciting. “ A representation of the view of the new Kroger building from the Central Parkway. Provided by GBBN Architects.

The project also marks the completion of a roughly three-year search by Rookwood Properties to convince Cincinnati’s largest company that a grocery store could be located on its property near the Hamilton County courthouse. Rookwood is a commercial real estate developer whose residential projects include the Lytle Tower and Brandywine Court residential community in Fairfield.

Fred Kanter, partner at Rookwood, informed WCPO in August 2014 that he had hired GBBN Architects to develop design concepts for the property on Walnut Street, which his company has owned since 1996, with up to 500 parking spaces and 150 to 200 residential units.

“There would probably be space for a grocery store,” said Kanter. “We’d love to have her there under the right circumstances.”

Sixteen months after these comments, Rookwood subsidiary Nieman Investors Ltd bought three additional parcels of land that gave an additional third of an acre and more access to Central Parkway. That purchase is important, said 3CDC’s Gelter, as it allowed access to trucks without reducing the 30,000 square feet of street-level retail space.

“It was fantastic to work with the Kanters throughout the process,” said Gelter. “We did everything with a handshake.”