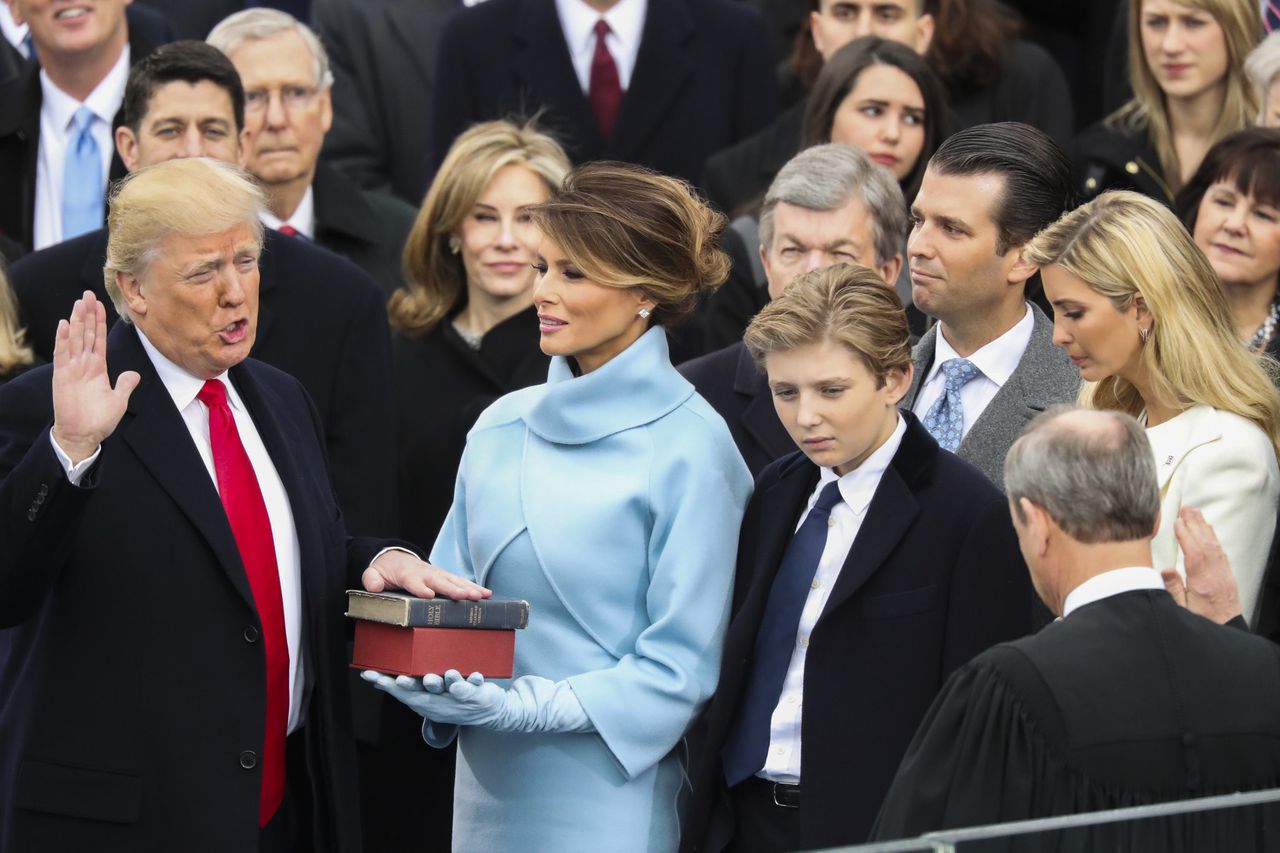 Donald Trump is sworn in as the 45th President of the United States by Chief Justice John Roberts as Melania Trump looks on during the 58th inauguration of the President at the U.S. Capitol in Washington on Friday, January 20, 2017.

Donald Trump is sworn in as the 45th President of the United States. Anti-Trump protesters take to the streets in DC, Ohio and elsewhere. And the Ohio Supreme Court rejects the Libertarian Party’s recent attempt to regain state recognition. Today’s Ohio Politics Roundup is brought to you by Jeremy Pelzer.

Trump sworn in as president: Donald Trump took the oath of office on Friday as the 45th President of the United States and in his inaugural address promised to return the power of the elites to the people and to end an era of “American slaughter”. Trump: “From that day on, it will only be America First.”

Ohio reaction to Trump’s speech: It was a breath of fresh air to the new Buckeye State President’s supporters who attended Friday’s inauguration and loved the Republican billionaire’s focus on “restoring power to the people,” writes Sabrina Eaton of cleveland.com.

Speaking to Eaton, Ohio GOP Congressmen Dave Joyce and Pat Tiberi expressed the hope that President Trump will create jobs and improve the US economy. And Samuel Wurzelbacher, aka “Joe the Plumber”, even wore a tuxedo for Trump’s opening ball – “which sucks,” said Wurzelbacher.

Tim Ryan would have positive Things to say:: “Overall, I think it was a positive speech about the country, about the direction we want to go,” said Ryan, a Democratic congressman from Niles. “His rhetoric about rebuilding the country and people returning to work, I agree.”

Even Dennis Kucinich like the speech:: According to Henry J. Gomez of cleveland.com, the liberal former Congressman and Mayor of Cleveland tweeted, “GREAT #inauguration talking @RealDonaldTrump!” and wrote on Facebook that “Donald Trump’s message of unity is critical right now. … Let’s give him and ourselves a chance.”

jail reaction:: Inmates of Counties Marion and Hardin Prison also liked most what they heard from Trump – “especially his attempts to emphasize patriotism through skin color,” writes Chrissie Thompson of the Cincinnati Enquirer. But “That hasn’t changed their distrust of the new president. While Trump spoke, the women sighed or snorted in despair.”

“Women’s March” rallies protest against Trump: The day after Trump’s inauguration, an estimated 500,000 anti-Trump protesters – including many from Ohio – gathered in the National Mall for the “Washington Women’s March,” writes Eaton. Similar rallies took place in other cities in the country.

In Ohio, 15,000 people demonstrated in the public square for a “Cleveland women’s march,” said James Ewinger of The Plain Dealer. According to Enquirer’s Hannah Sperling, thousands protested in Cincinnati.

Two protesters from Cleveland were arrested: A man who allegedly spat on a police officer and a woman who tried to walk around one of the police cruisers to get hold of the man, according to Cleveland.com’s Courtney Astolfi.

Another March on Saturday:: Hundreds of anti-abortion protesters marched through downtown Cincinnati as part of the 33rd annual Pro-Life Rosary Procession, says Enquirer’s Mark Curnette. The march took place the day before the 44th anniversary of the decision of the US Supreme Court in Roe v. Wade, which legalized abortion.

over– –face on climate change: Less than an hour after President Donald Trump took office, the White House climate change website went offline, reports Kelly Reardon of cleveland.com. In its place, an “America First Energy Plan” reaffirming Trump’s commitment to eradicate a number of Obama’s global warming initiatives that the new plan calls “burdensome regulations on our energy industry.” Trump’s plan, however, promises that “clean air and water, the preservation of our natural habitats, and the preservation of our natural reserves and resources will remain a high priority”.

The Obamas are stay in the D..C..: The former first family rents a chic 8,200-square-foot home in the prestigious Kalorama neighborhood near Ivanka Trump and Jared Kushner’s new home, writes Joey Morona of cleveland.com. The Obamas decided to stay partially so that Obama’s daughter Sasha could finish high school in DC

A royal farewell:: LeBron James said goodbye to Barack Obama and his family in a video message as their final hours at the White House came to an end, reports Joe Vardon of cleveland.com. “You have been a real inspiration – not just for myself, my family and my children, but for everyone,” said James, a vocal Obama supporter. “It’s sad to even think about you, you pack up and leave the White House.”

NBA Trainer bangs Trump card:: San Antonio Spurs coach Gregg Popovich had a shame on Trump for a few minutes, Vardon writes. “I just wish he was more mature enough – had the ability to be more mature – to do something that is really inclusive instead of just talking and saying, ‘I’m going to include everyone,'” Popovich said.

Highest dish Rejects Libertarian party poll access:: The Ohio Supreme Court on Friday denied a lawsuit by the Libertarian Party in Ohio alleging it should regain state recognition because libertarian presidential candidate Gary Johnson received more than 3 percent of the statewide vote in 2016, Cleveland’s Robert Higgs writes .com. In a 6-1 ruling, the court agreed with Secretary of State Jon Husted that the libertarians could not use Johnson to regain recognition as Johnson ran as an independent, not a libertarian, in Ohio.

Cordray in political limbo: Cleveland.com’s Henry Gomez takes a look at the difficult situation Richard Cordray finds himself in politically. The former Ohio attorney general and potential candidate for the 2018 Board of Governors is currently stuck with a lawsuit pending over whether Trump can fire him from his job as director of the Consumer Financial Protection Bureau. If the GOP wins and Cordray is fired quickly, he might be free to make an offer for the governor. But with many other demes scrambling for the governor, time isn’t on Cordray’s side.

Another name in the gubernatorial chatter: Dayton Mayor Nan Whaley. Gomez writes that she has had serious talks about running for the governor in the past few weeks.

Money matters: The Dow Jones Industrial Average rose 148 percent between Obama’s in office and Friday’s departure, according to Cleveland.com’s Rich Exner. Exner crunches the numbers to see how that fares against other current presidents.

UC Men’s Basketball: Most Important Athlete of Every Decade | Sports