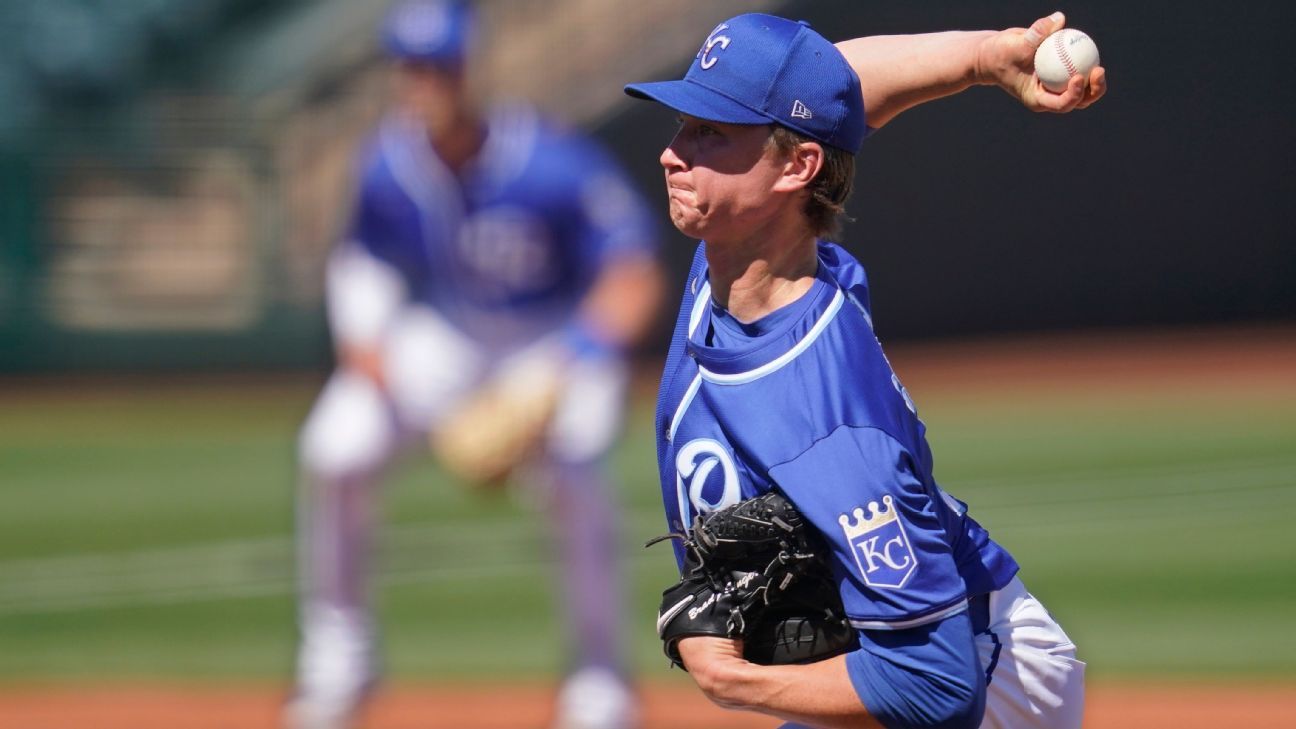 Sunday usually has a full list, but not only are the Nationals and Mets waiting to start their 2021 season, but the Marlins, Mariners, Giants and Rays regularly have non-working days.

All eyes will be on Anaheim as Shohei Ohtani makes his first start of the season against the White Sox. The Angels two-way player threw just 1 2/3 innings before a forearm load finished his hill work last season.

The map isn’t deep with streaming options, but there are some interesting options. This is where Sunday’s pitchers and hitters are in a good place to bolster your lineup. All candidates are available in at least half of all ESPN leagues.

Brady Singer (R), in 26% of the ESPN leagues, Kansas City Royals versus Texas Rangers: Despite skipping Triple-A, Singer made his debut last season and held its own. He throws a sinking fastball over half the time and uses a slider as a main secondary bid. Singer mixes in with the occasional change, but is primarily a two-tone type. His strike and gait rates were in league average, and his hard sinker was creating grounder north of a 50% clip. Singer pulls one of the weakest lineups in the league so he’s in good shape to start the season on a good note.

Tarik Skubal (L), 15%, Detroit Tigers versus Cleveland Indians: Skubal turned around in his second strong feather in a row, bringing the success to a point in the rotation of the Tigers. The Left gave up nine homers in 32 frames last season, masking an efficient strikeout-to-walk ratio of 37:11. There’s a fair amount of swing and miss in the Indians v Southpaw lineup, which gives Skubal a good opportunity to punch out some punch-outs on his debut in 2021.

Garrett Richards (R), 7%, Boston Red Sox versus Baltimore Orioles: The crisp temperature in New England has kept the scoreboard operator in the Green Monster calm over the weekend so far. Richards hopes it stays that way after almost missing the opening roster due to being late due to health and safety logs. He wants to build on last season’s bounce-back campaign, despite being nearly 33 years old now and unlikely to regain the shape of his salad days.

Jordan Lyles (R), 1%, Texas Rangers at Kansas City Royals: Lyles takes fourth place by default as the abbreviated slate narrows the options. There’s a good chance the right-handed isn’t editing the five frames it takes to win with the southpaw Taylor Hearn to work with Lyles. Nevertheless, Lyles (like Hearns) plays against an improved, but still below-average Royals line-up.

Bullpen: With regards to Kansas City, Wade Davis scored the club’s first save when Greg Holland allowed a couple of runners in an unsafe situation before Mike Matheny signaled for Davis. While Holland is probably even closer, Matheny surprised many last season by reaching out to Trevor Rosenthal early on and Rosenthal never quitting the job.

For the latest team-by-team situations, see our closer table.

Catcher – Elias Diaz (R), 1%, Colorado Rockies v Los Angeles Dodgers (LHP Julio Urias): With many managers choosing to rest their main catcher on Sunday, finding a backstop that enjoys the pull edge while their backup doesn’t is a smart approach. It’s even better if the candidate has a game at Coors Field.

First base – Jared Walsh (L), 39%, Los Angeles Angels versus Chicago White Sox (RHP Dylan Cease): After Walsh struggled to open the 2020 campaign, he was sent to the alternate location where he regained confidence and flourished down the route. Cease is a promising youngster but has yet to show consistent control.

Second base – Cesar Hernandez (S), 34%, Cleveland Indians at Detroit Tigers (LHP Tarik Skubal): Last season was an odd year for Hernandez as his slash line was within his normal reach but his strength was failing and he didn’t attempt theft. Still, he’s a threat to help a fantasy team down the line and could get off the stolen base with Wilson Ramos behind the Tigers’ seat.

Third base – Rio Ruiz (L), 1%, Baltimore Orioles at Boston Red Sox (RHP Garrett Richards): Initially, it seemed like Ruiz was unemployed when Baltimore signed Maikel Franco. However, Ruiz played second base in the first two games and flashed the leather on the keystone. Ruiz fans at a high clip but there is some pop in it.

Shortstop – Willi Castro (S), 21%, Detroit Tigers versus Cleveland Indians (RHP Aaron Civale): While Castro’s .448 BABIP was obviously bloated last season, historically it has an above-average grade. The problem is, he’s a fan about 25% of the time, too much for a player who mostly relies on his wheels. However, on a day when only a few shortstops are available, Castro receives the nod.

Eckfeld – Joey Votto (L), 31%, Cincinnati Reds versus St. Louis Cardinals (RHP Carlos Martinez): Even though it started last season, it’s still weird to see Votto appear among fighters in more than half of the ESPN leagues. In the first twelve years of his career, Votto was only 20 times with an infielder – twice on the opening day. Chances are it was just a fluke, but he’s also talked about hitting more fly balls. Maybe it’s the result of a change in approach.

Middle infield – Luis Arraez (L), 8%, Minnesota Twins at Milwaukee Brewers (RHP Adrian Houser): Arraez is a sneaky scorer gamer as he not only makes frequent contact but also draws walks in a decent clip and sets the table for a strong twin lineup.

Outfield – Hunter Renfroe (R), 13%, Boston Red Sox versus Baltimore Orioles (LHP Bruce Zimmermann): Renfroe didn’t start the game on Saturday but he likely won’t be relegated to the little side of a train. That said, he’ll surely be on the hill with one south paw on the Sunday lineup. The ball doesn’t carry well, but Renfroe’s fly-ball pitch should go well with Fenway Park.

Outfield – David Dahl (L), 8%, Texas Rangers at Kansas City Royals (RHP Brady Singer): Long viewed as a threat to strength and speed embellished by Coors Field, injuries stunted Dahl’s development. He is healthy now and has got off to a good start with his new club. He goes 3: 5 with two runs and trains from the 2-hole on the opening day.

Outfield – Kyle Isbel (L), 2%, Kansas City Royals v Texas Rangers (RHP Jordan Lyles): It seems like every season someone shows up last in spring training to unexpectedly grab a roster spot on opening day. While the exploits of Bobby Witt Jr. were the talk of the Royals camp, it was Isbel who headed north as the starting right-field player in Kansas City. He impressed in the Arizona Fall League 2019 and last summer at the alternative training ground. If he can limit strike outbreaks, Isbel has the tempting combination of power and speed, with speed now more likely but with chance to develop a power strike further.

Why is Cincinnati Bell (CBB) up 0.9% since its last earnings report?