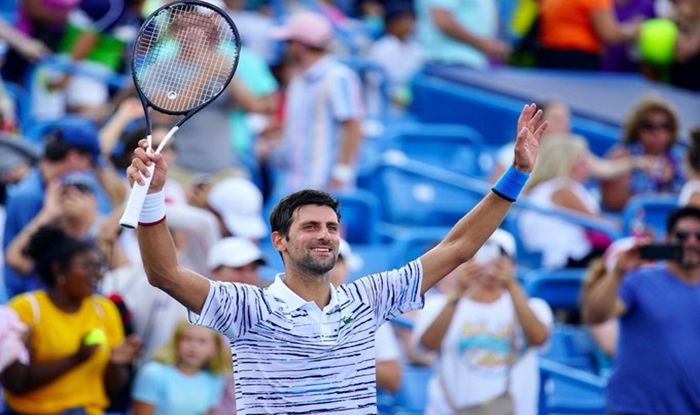 Ace tennis superstars – Roger Federer and Novak Djokovic recorded resounding victories in their respective games as they advance to the next round of the WTA-ATP Cincinnati Masters on Tuesday. It wasn’t good news in the women’s department when former world number 1 Serena Williams retired from the tournament due to back problems. Williams had been hoping to recover from the back pain that forced her out of the WTA final in Toronto on Sunday, where she only played four games before retiring. Also read – French Open postponed for a week due to COVID-19 outbreak, from May 24th

For Djokovic and Federer, who were back in action for the first time since the Serbs beat the Swiss in the Wimbledon final, it was a smooth start to building the US Open. Federer prevailed in third, remained unaffected by a one-hour rain break at 2-2 in the second set and finally defeated the Argentine Juan Ignacio Londero 6-3, 6-4 to reach the third round after winning seven times . Read also – Serbian model reveals bomb attack on blackmailing Novak Djokovic in sex extortion fraud

“I’m very happy, even if it was a bit difficult with the rain delay,” said Federer. “I’m happy to be on trial again.

“This is the beginning of a long, long hard court swing. It’s good to start with a win.

“I didn’t know that much about my opponent – he’s new to the tour – but in the end you have to focus on your own game.” Defending champion Djokovic had three double faults when he lost his serve against Sam Querrey in the opening game, but quickly found relief and scored a 7-5: 6-1 win over the American.

“I finished the game well, even if the start was nervous,” said Djokovic, who would break Querrey twice to take the first set and then roll to victory.

“At the beginning Sam felt comfortable on the pitch and dictated. It was hard to face his big serve, ”said Djokovic, adding that he“ hoped for a better performance in the next round ”.

Williams was only trying to get better after pulling out of their scheduled first-round match against Zarina Diyas qualifying. “I came to Mason, Ohio on Sunday and tried everything to be ready to play tonight. I was still hopeful after my practice this morning,” Williams said in a statement released by tournament officials.

“But unfortunately my back is still not right.”

In early action, another Stan Wawrinka won a first-round bout against 2017 Cincinnati Champion Grigor Dimitrov, 5-7, 6-4, 7-6 (7-4). After a thunderstorm overnight, Dimitrov broke the lead in the 12th game of the first set in the leaden sky. The 33-year-old Swiss ace fought back with the only break in the second set.

Wawrinka took a 5-1 lead in the final set but wasted two match points in game eight and was broken twice while serving for the win.

Wawrinka had to hold back his Bulgarian opponent in the final tiebreaker before he could prevail with his 10th ace in more than two and a half hours.