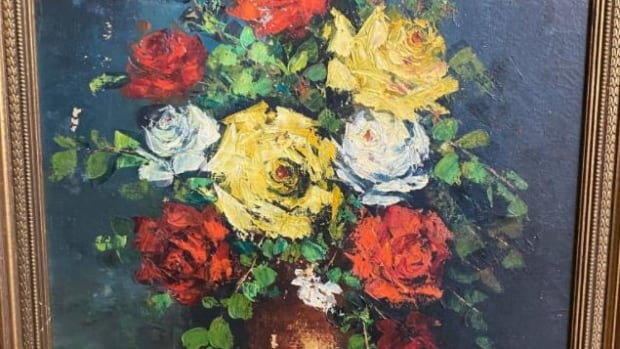 It’s a painting that only costs a dollar, but it’s priceless to a Calgary family.

The painting in question is one of a bouquet of flowers, and Melissa Pawley bought it from a goodwill in Cincinnati, Ohio.

When she did a reverse google image search of the signature, she came across a poppy painting with the same signature. She sent a message to the poster.

“I thought she would either think I was crazy or be happy,” said Pawley.

The woman on the other end of the conversation was Julie Van Rosendaal, CBC Calgary’s Food Guide. She recognized Pawley’s frugal work of art right away.

“It was pretty much my grandfather’s painting,” said Van Rosendaal.

Her grandfather, Frans Van Rosendaal, disappeared while flying a small plane in Hawaii in the late 1960s and was never found. Now his family has another slice of his life to remember him.

Are you ready for an amazing story? ARE YOU?? So a few days ago someone I didn’t know sent me a message on Facebook … She picked up an old oil painting at a goodwill in Cincinnati for $ 1, brought it home, and did a google image search in reverse on the signature carried out. pic.twitter.com/iKObhgLEpX

Van Rosendaal has no idea how her grandfather’s painting got to Cincinatti, but it’s on the way home. Pawley will send the painting to Calgary for free.

When the painting arrives, Van Rosendaal gives it to her father as a birthday present.