Printed circuit board (PCB) design has moved a long way from the tape and cut methods of the past. Advanced skills have allowed designers to use ECAD software to create rigid FR-4 circuit boards with little difficulty.

Flexible PCBs and connections are common today and are often used to connect hardware such as laptop ‘motherboards’ to screens or to enable foldable electronic systems.

Example of a flexible printed circuit board. Image courtesy of PCBWay

In recent years, a discussion has arisen about the third type of printed circuit boards and electronic devices: stretchable electronics. Stretchable electronics are on the rise in research, and with the popularity of wearable technology, they could become a commercial product in the near future.

In this article, let’s discuss what tensile electronics are, the challenges and applications, and finally, dive into the more recent research.

An example of a flexible circuit board with system components on board. Image courtesy Millennium Circuits Limited

The IPC-6013D (2017 edition) is the IPC standard for the performance of flexible and rigid-flexible printed circuit boards. However, unlike flexible circuit boards, which are normally bendable in a single axis, stretchable electronics is an evolving class of design that is stretchable, twistable, and pliable.

Structures such as signal connections, substrates, sensor electrodes and even energy storage surfaces can be stretched by different loads and still retain their operating properties.

Overall, there are several challenges to overcome in order to achieve these attributes and specific uses that may apply to them.

A comprehensive paper published in 2019 by Wuhan University researcher Wei Wu provided an overview of the manufacturing materials, challenges, and advancement of stretchable electronics, as well as the various potential or ongoing applications of this technology.

Wu states that there are two main methods to achieve elastic electronics, one of which is the use of inherently stretchable materials such as predominantly poly (dimethylsiloxane) (PDMS).

One way to achieve conductivity is through the use of metal nanowires, carbon nanomaterials, and polymers embedded in the stretchable materials in various configurations, including “wavy structure configuration, island connection, fractal design, and traditional paper cutting”.

The paper also covers three potential areas of stretchable electronics: conductors and electrodes, energy storage, and the development of printed electronics such as transistors and sensors that are stretchable and self-healing. 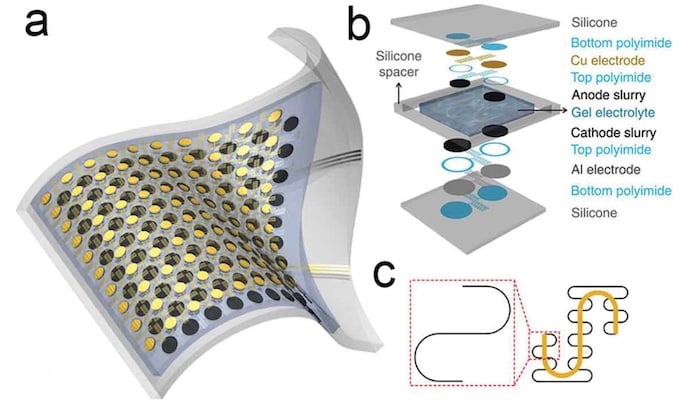 Flexible lithium-ion battery tool in a twisted state (a) and exploded view (b). Image (modified) courtesy of Wei Wu and Xu et al

The first breaking news comes from the American Chemical Society (ACS) highlighting the development of a flexible supercapacitor made from wrinkled titanium carbide, an MXene nanomaterial.

The supercapacitor electrodes were developed by dissolving the MXene powder in hydrofluoric acid to obtain pure layers of titanium carbide nanosheets. This material was placed on top of an 800% stretched polymer, as seen below (in the still image), and then wrinkled as the polymer returned to rest.

Two crumpled MXene electrodes and a polyvinyl (alcohol) sulfuric acid gel electrolyte as a dielectric were used to form the supercapacitor. 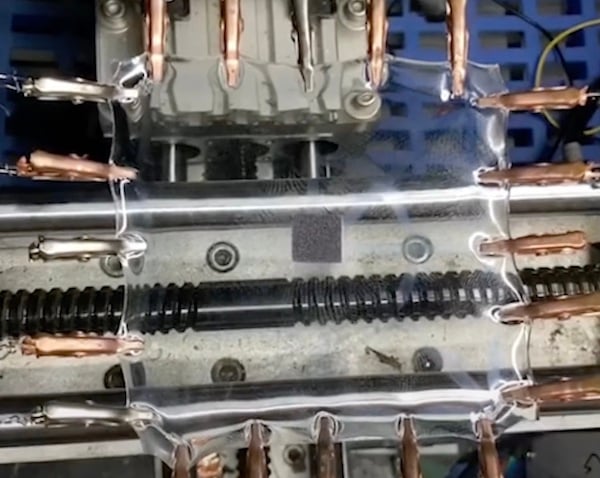 MXene-coated supercapacitor foil in the middle on the stretched surface. image used with permission from ACS

The resulting crumple created an accordion-like structure on the surface of the electrode that allowed for repeated extensibility. The researchers state that their supercapacitor retained up to 90% of its energy storage capacity after 1000 stretching, bending or twisting.

MXene nanomaterials have proven to be very versatile. For example, nanomaterials are also used successfully as EMI shielding material in fabrics.

Let’s get to the MXene nanomaterials and take a look at the research that uses some type of conductive film to push the boundaries of rigid circuit boards.

Also this month, a team of three researchers led by Professor Unyong Jeong from Pohang University of Science and Technology presented the idea of ​​a “deformable printed circuit board” on a stretchable anisotropic conductive film (S-ACF).

The team developed this material by patterning metal particles in a copolymer called SEBS-g-MA. The researchers found that it can bond the resulting material to electronic components to create conductivity between subsystems or devices. 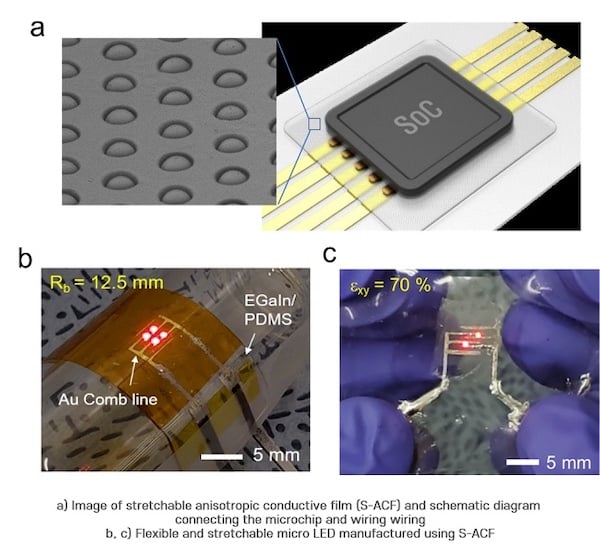 They also suggest that S-ACF material can be structured to reduce the amount of unused metal particles and increase the polymer surface area. Compared to conventional anisotropic foils, this property is said to lead to improved extensibility.

Finally, let’s take a look at the development of nanomembrane that were developed for use in “skin electronics”.

Professor Hyeon Taeghwan and researcher Kim Dae-Hyeong from the Institute for Basic Sciences (IBS) in Seoul have developed a method for producing a new material that should meet demanding performance criteria.

They coined the “Float Assembly” method, which uses the Marangoni effect, which is used to distribute the nanomaterials when the liquid composite is dripped onto it. The materials are then packaged by dropping a surfactant on them. 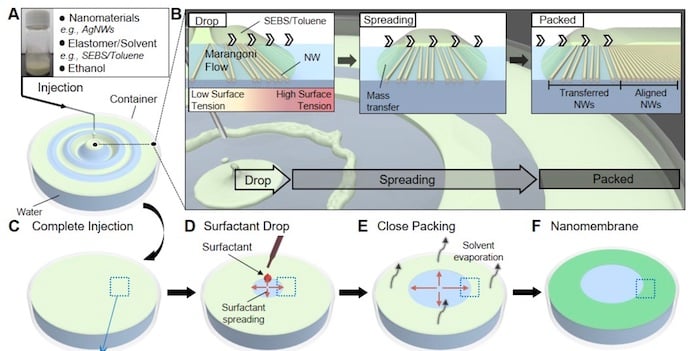 The basic process of building the nanomembrane. image [modified] used with kind permission of IBS

One of the most important successes that are said to have resulted from this process is an ultra-thin rubber sheet with a thickness of 250 nm and an extensibility factor of 10x.

All in all, the world of stretchable and flexible electronics is gaining momentum. With each of these new advances in materials used to make better electronics, it will be encouraging to see where this technology leads next, especially outside the realm of research.

Have you worked with portable film technology in your applications or are you involved in the development of stretchable or flexible electronics? Tell us about it in the comments below.