6 of the strangest opening days in history 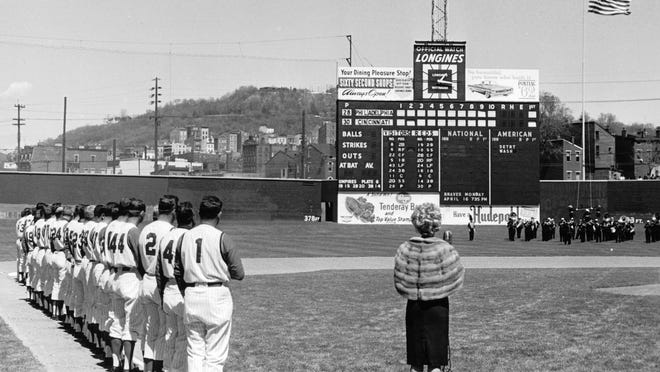 It’ll be another unusual opening day as the Reds open their second season during the coronavirus pandemic on April 1st.

There is no parade, at least until the Reds are allowed to fill the stadium and there are no restrictions on events. Who knows when that will be. Ohio Governor Mike DeWine has allowed 30 percent capacity in the Great American Ball Park – 30 percent more than last year.

▶ ︎ Snow flurries on the opening day? A cold front is coming

It may be disappointing for fans of Cincinnati’s favorite unofficial holiday, but we’ve seen some other weird, even tragic, opening days. Here are six of the weirdest opening days …

Days of relentless rain have canceled the opening day on April 11th as well as the entire three-game series against the New York Mets. The Reds had to reopen the season on the road for the first time since 1888. The home openings finally took place on April 22nd.

The fans weren’t particularly happy and only 10,266 came to Crosley Field. The Reds had already lost five games in a row, and the team was missing the popular Frank Robinson, who traded in the off-season. The Reds fell 9-7 to the Philadelphia Phillies before “a lot of” opening nights “booed,” reported The Enquirer.

[ Get all the latest Reds news this season.Sign up for the Reds Report newsletter, listen to our podcast, or download the Cincinnati.com Sports app for Android and iOS. ]

The Reds players woke up on the morning of April 6th to find that four inches of snow had fallen overnight. “No game today,” said Cesar Geronimo, looking out the window.

But the Snowpocalypse didn’t stop the Riverfront Stadium crew on opening day. A 60-strong staff worked its magic, shoveling and hauling the snow into trucks that carted away the powder so that no snowflake could be seen at the time of the game.

The temperature was 38 degrees which made for a cool opener. “My hands and feet were numb,” said Geronimo. But he got hot with a two-run homer that led the Reds to a 5-3 win over the San Diego Padres.

Neither snow nor rain nor storm winds could stop Pete Rose’s return to his hometown as the Reds player manager on April 8th. The crowd on opening day saw full weather conditions – including sunshine for a while – and two snow delays. Enquirer cartoonist Jerry Dowling drew a Zamboni that cleared the AstroTurf.

Rose competed for his homecoming and drove a 4-1 win for the Reds against the Montreal Expos in three runs with two hits. “My philosophy is that when you hit a few hits and win, you’re always warmer than when you go 0v4 and lose,” said Rose.

On April 1, referee John McSherry collapsed behind home plate with two outs in the first inning at Riverfront Stadium. McSherry had complained of an irregular heartbeat and intended to see a doctor on the rest day after the kick-off. Despite the efforts of the medical staff, he was pronounced dead an hour after the first pitch at the university hospital.

A silence fell over the crowd as most of the heads weren’t into baseball that day.

“I feel cheated,” said owner Marge Schott after the game was postponed. “We don’t want this to happen to us, not in Cincinnati. This is our day. This is our history, our tradition, our team. Nobody feels worse than me. “

A chaplain said a prayer and a moment of silence was held before the scheduled game against the Expos the next day. Then the referee crew went to the field to give a standing ovation. “It’s nice to see yourself as a person,” said referee Tom Hallion. “Sometimes that’s overlooked in our job.”

After four innings, the crowd got the nerve to boo the ump and baseball was back to normal.

The deal to bring “The Kid,” Ken Griffey Jr., to his hometown team made the hoopla more of a circus than ever by Opening Day 2000. Griffey waved his cap to the “thundering ovations” – a “goosebumps moment” in front of 55,596 fans at Cinergy Field.

But the mood of the crowd wavered as the rain came and referees called the game in the sixth inning of the 3-3 draw with the Milwaukee Brewers. After 5½ innings the game was officially declared a tie, but ties do not count towards the standings. However, all the individual statistics have done so. The Reds dropped the opening game 5-1.

The entire baseball season (and almost everything else) has been postponed due to the novel coronavirus pandemic. The Reds’ opening day was originally scheduled for March 26th, which would have been their earliest opening day. Instead, it was her last one that finally played on July 24th.

On March 26th, the streets of Cincinnati were not flooded with red and white. The Enquirer drone over the Great American Ball Park, pristine in its void. A brother and sister made their own opening parade in Blue Ash in a cozy Little Tikes coupe with a cardboard sign.

Then, when the 60-game season finally started in July, no fans were allowed in the stadium. About 100 stalwarts stood outside with their faces pressed against the gates, hoping for a look. When Mike Moustakas scored a home run in the Reds’ 7-1 win over the Detroit Tigers, ground crew members gave Moose a standing ovation and antlers as he circled the bases.

Are you looking for a COVID-19 vaccine that was shot in Ohio? This couple traveled from Cincinnati to Dayton