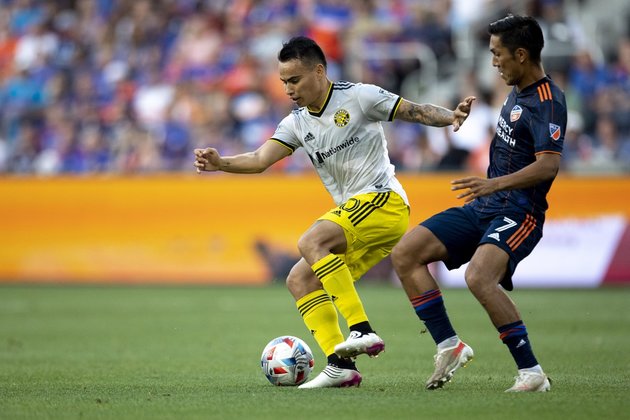 Lucas Zelarayan scored and set up Miguel Berry’s first MLS goal in the 77th minute when the ten-man Columbus crew caught up to 2-2 against hosts FC Cincinnati on Friday.

The crew (4-3-5, 17 points) were 2-0 down within the first 24 minutes and lost defender Harrison Afful with a red card in the 42nd minute before making a comeback.

Cincinnati (3-5-3, 12 points) have recorded three losses and one draw at TQL Stadium since their debut on May 16.

Berry had been in the game in the 20th minute when he took a lead from Zelarayan down the right side of the box and shot past goalkeeper Kenneth Vermeer to make it 2-2.

Berry’s previous MLS experience was a minute against New England on July 3, a game in which the crew were also 2-0 down before they drew 2-2 in Columbus’ first game at Lower.com Field.

Edgar Castillo scored 25 seconds after the start of the game and Luciano Acosta scored 2-0 in the 24th minute. After Afful’s exit, Zelarayan pulled the crew to 2-1 in the first minute of stoppage time in the first half.

Castillo’s first goal since August 14, 2018 while playing for the Colorado Rapids was a stunner from 22 yards after a pass from the Acosta end line.

Cincinnati doubled their lead after a restart when Acosta took a shot from the left in the box to score his third goal of the season.

Zelarayan, who has scored no goals or assists in the last five games, scored with a 35-yard bender. It was the fourth goal of the season of the MLS Cup MVP 2020.

In the first 45 minutes there were 15 fouls and three yellow cards in addition to Afful’s red card. Cincinnati received three warnings in the second half.

Both teams had missed numerous players because of the CONCACAF Gold Cup. Cincinnati had to do without defender Ronald Matarrita and midfielder Allan Cruz, both playing for the Costa Rican national team. The crew has six players in the tournament, including goalkeeper Eloy Room (Curacao) and top scorer Gyasi Zardes (USA).